Metroidvanias — a genre inspired by nonlinear side-scrollers like Super Metroid and Castlevania: Symphony of the Night — have become a favorite project of smaller studios. I love Metroidvanias, so that’s great for me, but I do wonder how much room for innovation exists. Sundered, which comes out on July 28 for PlayStation 4 and Xbox One, proves that there’s still space for the genre to grow.

Sundered doesn’t remake the Metroidvania. You’ll find a lot here you’d expect. You explore a 2D world, often finding road blocks that you can only overcome later once you discover new abilities. But as I played the PC version of indie developer Thunder Lotus Games’ new project, I found a lot of fresh ideas. In Sundered, death isn’t much of a setback. Instead, it gives you the chance to become stronger. 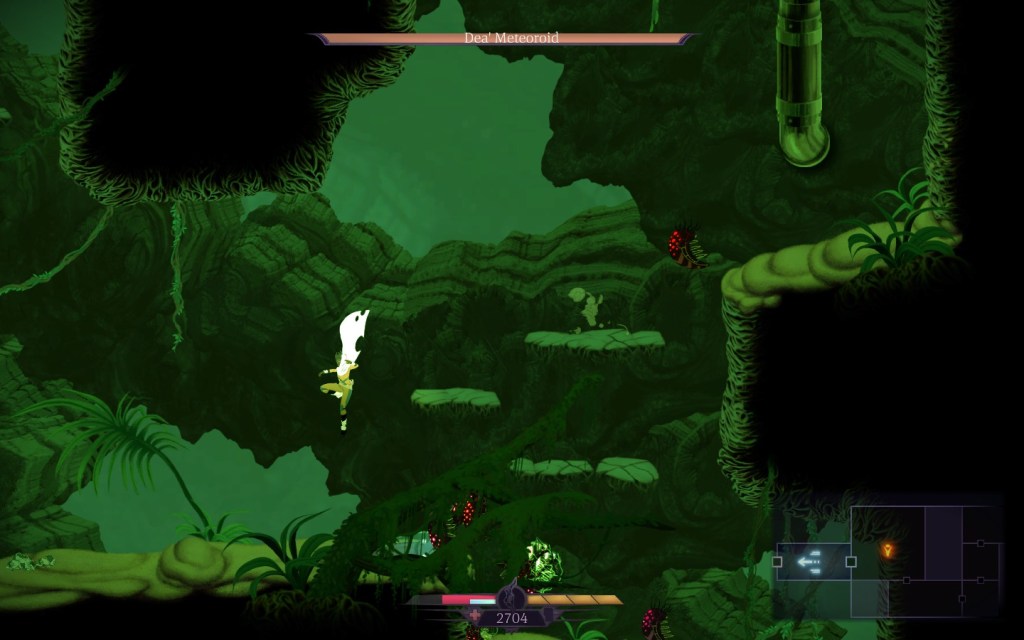 A reward in death

OK, after all my talk about originality, I must confess that the core concept of Sundered isn’t unique, especially if you’ve played Rogue Legacy. Dying in Sundered takes you back to the starting point, but you keep all of the abilities you’ve found and all shortcuts that you’ve discovered remain open.

But you’re also able to purchase upgrades when you go back to the starting area. You collect shards by defeating enemies and finding treasure sacks hidden through the map. Even when you die, you keep this currency, which then helps you improve aspects of your characters, like damage and total health. So, you start, you go as far as you can (collecting as many shards as possible along the way) before you die, you go back to the beginning and purchase new upgrades, and you set out again. It’s satisfying to see how far you can get before succumbing to death, and making good progress means you can become much stronger before you set out again.

A changing but consistent world

Again, this is similar to the excellent Rogue Legacy, which also had you upgrading your stats after every death. But while that side-scroller features a world layout that changes each time you died, Sundered’s map remains the same … mostly. This is what I found interesting. Think of Sundered’s map as a series of connected squares. While these larger squares will always be in the same places, smaller squares make up those bigger segments. It’s these areas that change after every death. So, while you know the general way you need to go to find your objective or retrace your steps, you’ll experience different areas.

It’s a genius way to combine the freshness of a random map with the sense of progress you’d achieve from exploring a static world. 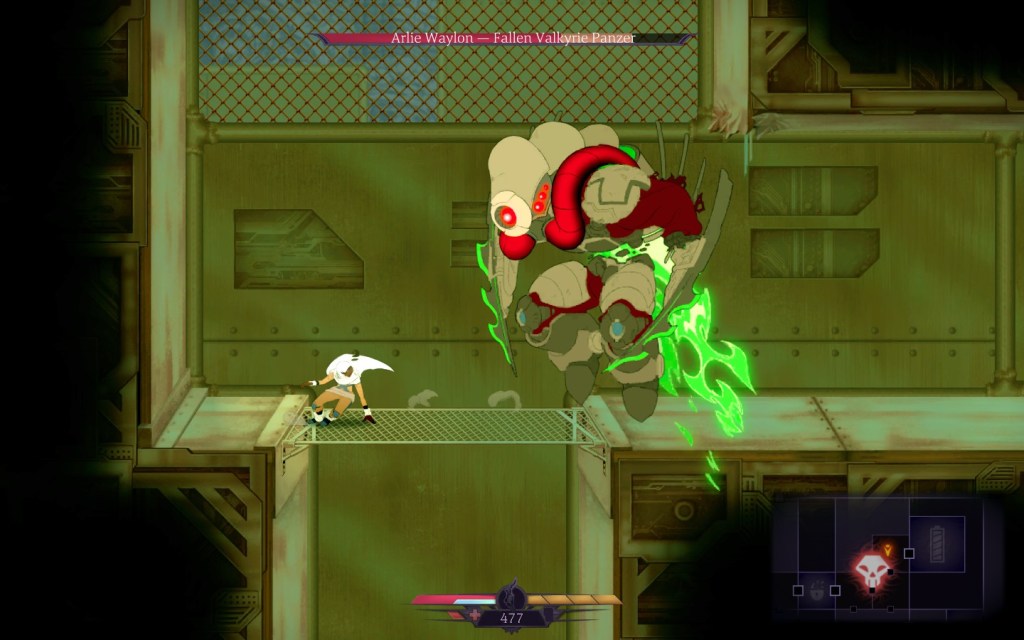 Exploring, dying, and getting a little stronger each time is fun, but Sundered also stands out for its beautiful 2D art. Similar to another gorgeous Metroidvania, Ori and the Blind Forest, the backgrounds and character animations blend together to make a cinematic experience.

Death is a big part of Sundered. So what’s killing you? A lot of enemies. Seriously, bad guys can quickly flood the screen. And unlike most of these kinds of games, including Super Metroid and Symphony of the Night, the enemies aren’t laid out in specific places across the world. Instead, they’ll randomly decide when to attack you at just about any point on the map.

With so many bad guys, combat is a big part of Sundered. It’s simple — you can press an attack button to swing a sword on the ground or in the air — but the animations and fluidity of chaining hits together is satisfying. And even though you rely on a single attack button, you quickly learn some of Sundered’s intricacies (like knowing when it’s best to attack in the air or chain short combos on the ground). You’ll also find some abilities that open up new combat possibilities, like a directional charge attack and a giant energy cannon.

The movement is just as fluid. You can use a dodge roll that gives you a big burst of speed while helping you escape from swarms of enemy. But you can also maintain that momentum to help your platforming. You can even use some of your aerial attacks to help you stay in the air and make trickier jumps. It all makes exploration more enjoyable. 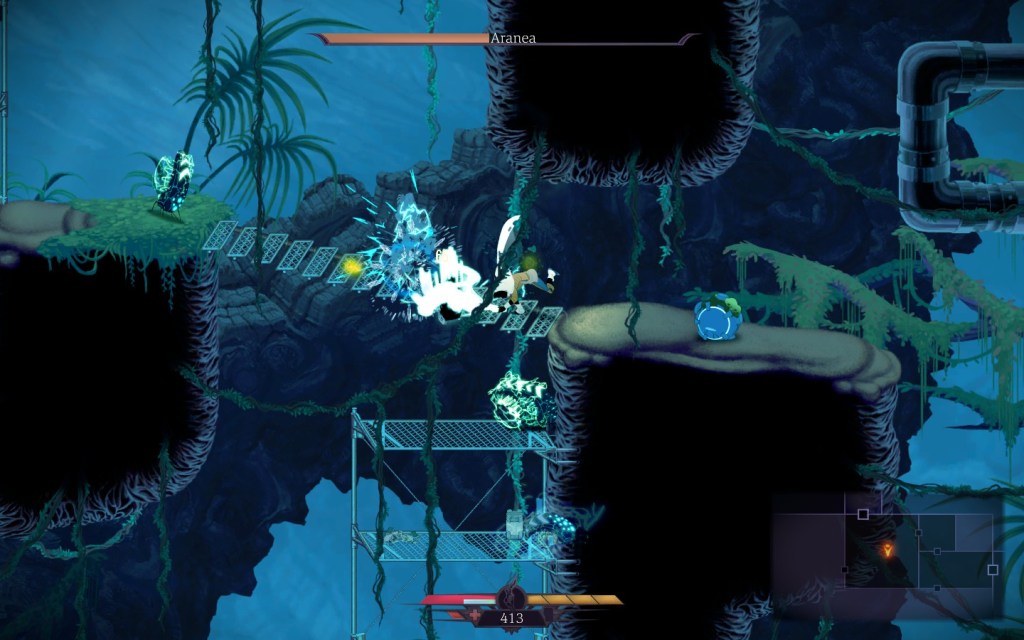 Above: Combat can get intense.

Even though the game is able to slightly alter its world each time you die, it can feel like you’re doing a lot of the same thing. Even with different layouts, areas look mostly the same and feature the same kind of content. Most of the game’s challenge comes from battles instead of platforming, but you get used to fighting waves of the same enemies.

Thankfully, you unlock a lot of shortcuts that lower the amount of backtracking you need to do. But even when you’re technically discovering new areas, a lot of it can begin to look and feel the same with so many familiar assets and enemies. 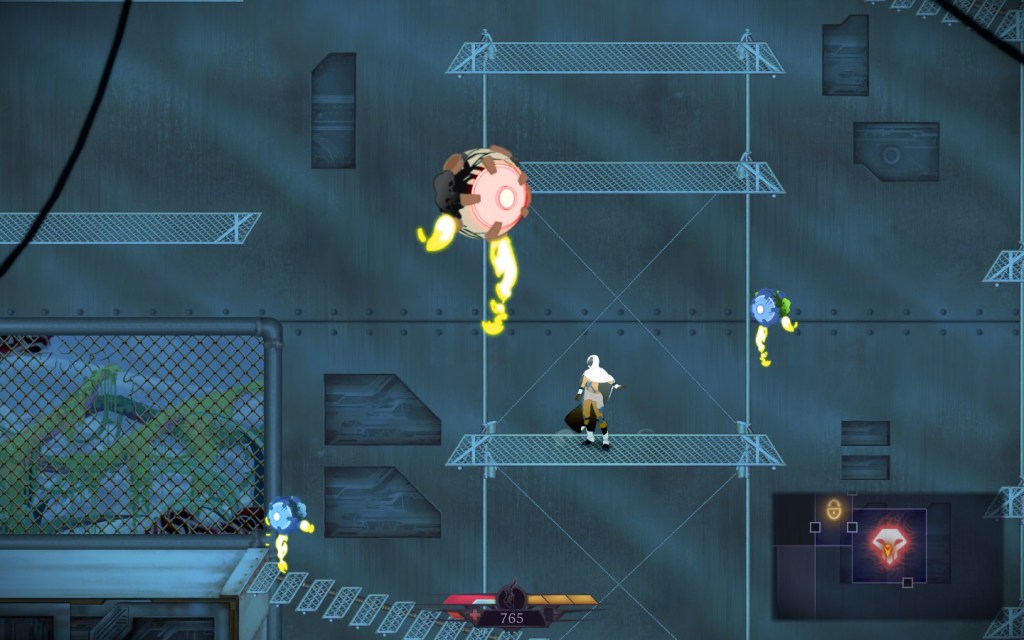 Above: “Haven’t I already been here like five times?”

Sundered is an easy recommendation for anyone who enjoys Metroidvanias. It has all the stuff you’d want, including a focus on exploration and finding new abilities. But it’s interesting takes on character progression, death, and level layouts come together to make Sundered feel like something new. And gorgeous 2D art and animations back up the smart design.

Yes, the Metroidvania space is becoming crowded with great games, but Sundered fits in with the best of them.

Sundered comes out on June 28 for PlayStation 4 and PC. The developer gave us a code for the PC version for this review.