And not only does this version come with Super Mario 3D World, but you also get a bonus campaign with Bowser’s Fury. Despite a shorter length than your average Mario game, Bowser’s Fury still feels like a full experience, one in which you can explore the largest Mario world that Nintendo has ever created.

Look, 3D Mario games are just my jam. So many of them — like Super Mario 64, Super Mario Odyssey, and the Galaxy titles — are among my all-time favorite games. Now I’m comfortable putting 3D World in that same cat(heh)egory.

This header should be another cat pun, but I’ll spare you

Super Mario 3D World is more linear than your average 3D Mario game. It’s something of a melding between the 3D and 2D Mario formulas. You use an overworld to access short stages, with your goal being to reach the flag pole at the end of each one. Even the way Mario moves takes inspiration from the 2D games, as you have to hold down a button if you want to spring up. You also become small Mario if you take enough hits, something that would never happen in Super Mario 64 or Super Mario Galaxy.

Super Mario 3D World is more about pure platforming than exploration. So like any good 3D platformer, the experience depends on strong level design. And I don’t know if any other game does it better than this. Each level offers a fun challenge. You’ll never feel like you’re on auto-pilot mode. Sometimes, you have to ride platforms while hitting rail switches before you and your ride fall to your doom. Or you’re racing on the back of a friendly loch ness monster. You may even navigate a maze of clear warp pipes. 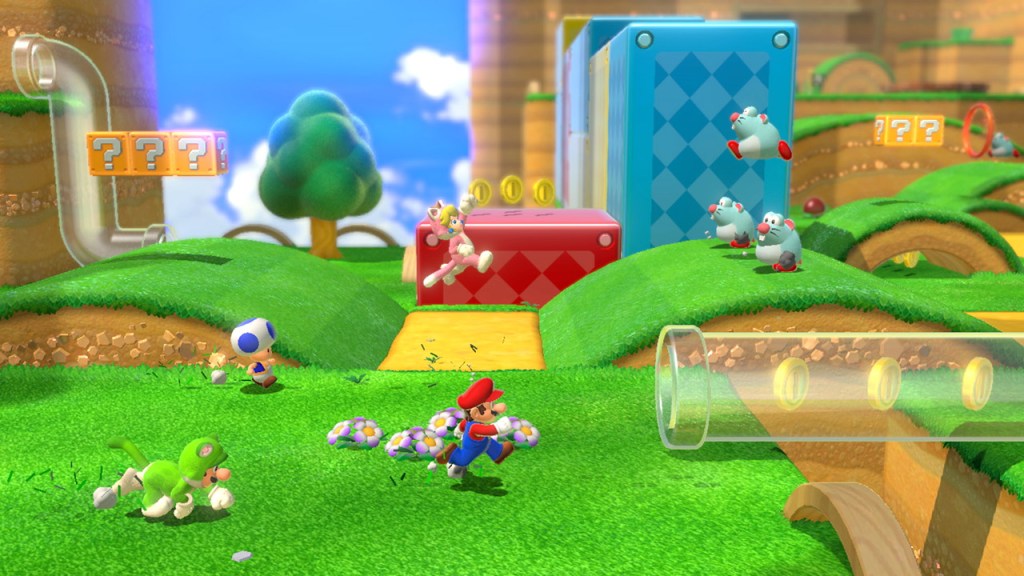 Above: Super Mario 3D World is a top-tier Mario game.

The variety and creativity is astounding. And 3D World also features a great lineup of powerups. The cat suit is the best of them, as it lets you climb up walls and navigate levels in ways you just couldn’t without it.

You also get to play through the game as one of multiple characters: Mario, Luigi, Peach, Toad, and (after you unlock her) Rosalina. Each one controls a bit differently. You can even have four players run through the game together through couch or online co-op. I’ve always found this kind of multiplayer platforming a bit too hectic and prefer to play these kinds of games alone, but I can’t deny that it can be fun to play some 3D Mario with friends (in short bursts, anyways).

Although this is a port a Wii U game, the Switch release just plays better. That’s because Nintendo has given each character a bit of a speed boost. Everyone moves faster, which helps the game feel smooth and exciting. It’s something you may not notice unless you see side-by-side videos, but I suspect this is one of the reasons I enjoyed 3D World so much more on my Switch than I did on the Wii U.

And then you have Bowser’s Fury, which uses the same mechanics, enemies, and power-ups as 3D World, but puts it all into a big open world experience. Here, you’re exploring a lake dotted with islands, each one housing multiple Cat Shines you can collect. You need these to help you take down Fury Bowser, a gigantic version of the classic Mario foe that will occasionally come to life and attack you.

Even though Bowser’s Fury takes a lot of the assets and tech from 3D World, it feels like its own experience. The giant area that you can explore feels like a Super Mario Odyssey level on steroids. 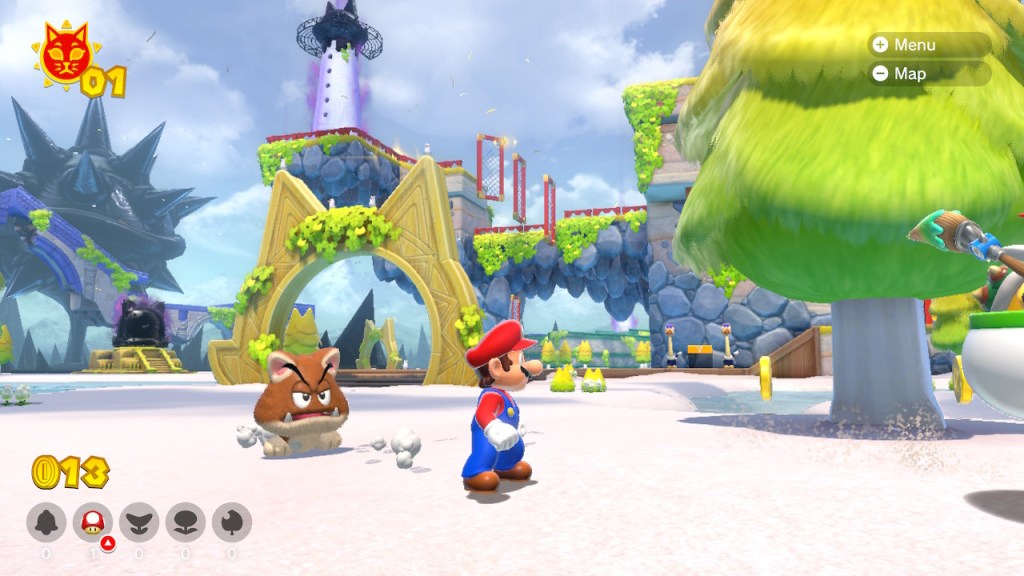 Above: You have a lot to explore in Bowser’s Fury.

You also have Bowser Jr. along to lend a hand. If you’re playing by yourself, he’ll help take out some enemies and find some powerups. You can also get a second player to take control of Bowser’s offspring, which is a great way to get a friend (or a sibling) involved in your adventure.

Unless you were somehow expecting a full-length game from Bowser’s Fury, you’re going to be happy with it. It offers just as much platforming fun as 3D World, but it also throws in a bit more of that exploration element.

You can play a lot of 3D Mario games on your Switch. Super Mario 3D World + Bowser’s Fury is just as good as any of them. It contains makes the Wii U game feel better than you remember, and the bonus campaign makes the package one of the best ports Nintendo has brought to the Switch.

It’s reshaped my thoughts on 3D World. This is one of the best Mario games ever made.

Super Mario 3D World + Bowser’s Fury comes out on February 12 for the Nintendo Switch. Nintendo gave us a code for this review.