It’s almost impossible to limit yourself to just one question for Shigeru Miyamoto. I had two pages’ worth of queries in my small notebook, and trying to narrow down that list while Nintendo’s renowned game designer waited patiently on the other side of a TV screen wasn’t easy.

But that was the rule that GamesBeat and other media outlets had to follow during a recent group interview about Super Mario 3D World, the latest platforming adventure for the iconic plumber (out Nov. 22 for the Wii U). Joining Miyamoto in the video conference — and also following the conspicuous trend of wearing a Mario-themed T-shirt — was producer Yoshiaki Koizumi and director Kenta Motokura.

Despite the one-question restriction, our hour-long meeting was a fun and lighthearted look into the creative process that led up to Super Mario 3D World’s conception. Here’s a look at what I thought were the most interesting topics covered in the interview.

How Super Mario 3D World fits into the Mario universe

“When we were coming up with the name for this game, Super Mario 3D World, the word ‘world’ had a particularly important meaning to me,” he said via translator. “So you guys may remember that after the original Super Mario Bros. game, there was also Super Mario Bros. 2 and 3. But it was the Super Nintendo Entertainment System title, Super Mario World, that first used this word. [Since then, the New Super Mario Bros. series has inherited the 2D side-scrolling gameplay.] 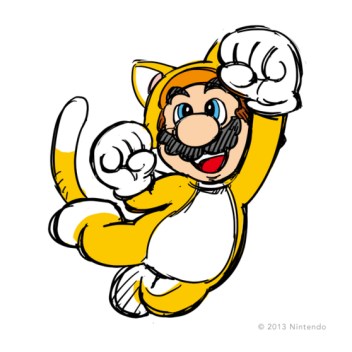 “And then separate from that was the 3D Mario games that started with Super Mario 64 and have continued to evolve all the way through Super Mario Galaxy 2. [We made another little departure with] Super Mario 3D Land, where we tried to combine elements of those two series: the side-scroller and the 3D.”

Super Mario 3D World continues what 3D Land started. While the path to finishing a level is still linear, you have a lot more to see and do when it comes to exploration. Up to three friends can help you with that in 3D World’s cooperative multiplayer mode.

“And so it was taking those ideas from Super Mario 3D Land and raising them to the highest level imaginable that we came up with Super Mario 3D World,” Miyamoto said. “The change in title from ‘Land’ to ‘World’ was very significant for me. Now the inclusion of ‘3D’ here of course [means] that it’s still a 3D world — not that it’s a stereoscopic view like on the 3DS, which I guess is a little funny for some people who get tripped up on it.”

Above: Clear pipes often have different directions to explore.

Experimenting with a new resolution

Super Mario 3D World marks the first time Mario and his friends have made the jump to the high-definition era in a 3D game. The developers took advantage of this new resolution by experimenting with different gameplay mechanics.

“Now that we’re able to have graphics in HD, this is allowing us to express some different ideas that we really haven’t done before,” Motokura said. “So for example, the clear pipe is something that’s just that much easier to see in this kind of presentation, and this allowed us to connect it to new ideas for gameplay.

“We had a lot of fun thinking about what happens exactly inside the pipe if you could see through it. What sort of things are able to go through? And so we worked on, ‘OK, maybe fireballs can go through. Maybe even Goombas could go through.’ We spent a lot of time coming up with different variations.”

The cat suit lets Mario and his friends climb walls and slash enemies with their claws. While Miyamoto, Koizumi, and Motokura weren’t afraid to show their love for this new power-up — they’d occasionally pose like a cat or casually drop “meows” into the conversation — they assured us that the suit serves a purpose beyond its adorable animations. Koizumi explained that since Super Mario 3D World has both 2D and 3D gameplay, they wanted something that was easy to play and had a “high degree of freedom” so players could explore its multilayered levels.

“We felt like [the cat suit] was especially well suited to achieving both of those goals together,” Koizumi said.