I wasn’t expecting Super Mario 3D World to wow me like this.

Before you play it, it’s hard not to look down on 3D World. When Nintendo announced the platformer in January, it looked like a quick turnaround of the 3DS’s Super Mario 3D Land. The Wii U was (and still is) struggling, and Nintendo clearly wanted to get another Mario game out to help boost hardware sales. I assumed that 3D World was Nintendo’s quick fix answer to some of those struggles.

A brilliantly designed platformer with a variety of gameplay

At its core, 3D World is still a game about running and jumping, but as always, Nintendo has found dozens of ways to spice up those basic actions with fun twists.

You can fight off snowmen with snowballs, jump over bottomless chasms using a propeller helmet, glide gracefully in a giant ice skate, and chase down a rabbit to steal one of the many green stars you need to collect … and that’s all in a single level.

3D World’s levels flow from one mechanic to the next in a way that ensures the player is never stuck doing anything for too long. Levels that do focus on a single concept are often shorter but more difficult, which is refreshing.

Nintendo also employed a great deal of variety within the overworld. 3D World has eight themed worlds and each of those comprise around eight normal levels, a handful of enemy stages, and at least one series of special challenges.

The enemy stages are brief and put the player up against something like a handful of Hammer Bros. enemies. The challenge levels are either a series of fast and difficult platforming obstacles or a special area that puts gamers in control of a toad who cannot jump and has to figure out a puzzle-like pathway to collect the green stars.

Just as each level flows brilliantly from one idea to the next, so does the whole game. It feels like the development team was forced to come up with scores of new ideas, and the producers only kept the awesome stuff.

3D World also (finally) doesn’t kick you back out to the map or a menu after every death. It simply reloads the level in blissfully little time and gets you right back into the action. It’s not as instant as Super Meat Boy or something like that, but it’s much quicker than other Mario games. 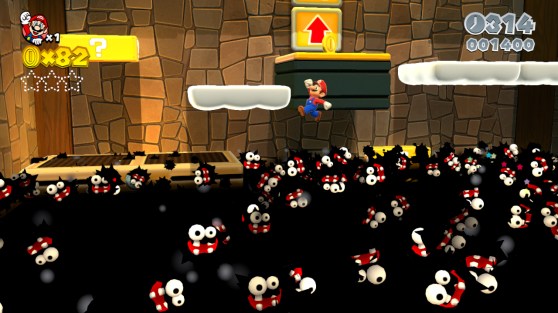 Above: The game even has a few interesting callbacks to games like Paper Mario and Mario Kart.

It’s like the Galaxy team, which also produced 3D World, obviously took every thing it learned making those Wii titles and 3D Land and used that knowledge to make its best game yet. Even beyond the variety, the fundamental Mario gameplay of jumping on enemies, using powerups, and finding secrets is better than ever.

Each main stage contains three green stars you have to collect. This is an ancient Mario trope, but 3D World does it very well. Those stars aren’t always just hidden in the most obvious locations. Instead, they are out of the way or force you to use precise platforming skills. New Super Mario Bros. U had a lot of that, but 3D World is even just a little bit better.

I should also probably talk about the power ups, and the different characters. Again, these are traditional Mario elements that Nintendo has refined.

For the first time since Super Mario Bros. 2 for the Nintendo Entertainment System, a Mario game is enabling players to choose to take on Bowser as Mario, Luigi, Princess Peach, or Toad for any level, and they each play differently. Luigi jumps higher, Princess floats, and Toad is speedy. Meanwhile, Mario is the average man who does everything well. While they aren’t incredibly different, it’s much more varied than the cast from the New Super Mario Bros. series (Mario, Luigi, and two toads), which all play identically.

Here, the small differences can have a major effect. I was struggling with a particular level on the seventh world. It had a series of jumps on to small platforms that were giving me hell. I probably lost about a dozen or so lives using Mario before I decided to try the stage with Toad … and, of course, I beat it on my first try with the blue little mushroom man. He doesn’t jump as high as the others, which actually helped me maintain control of his movements.

It’s easy to find a favorite and end up defaulting to one character. As boring as I am, I favorited Mario, but I found that the levels played differently (sometimes easier and sometimes not) depending on who I was using.

Finally, 3D World uses powerups very well. It doesn’t just give you something because it’s cool, and the designers didn’t put a lot of secrets in a level without also providing the powerup you need to reach them.

The powerups add to your abilities and are cute —  the cat suit enables the characters to do a swipe attack and claw up walls — but the levels are also filled with obstacles that require that deft use of those capabilities. 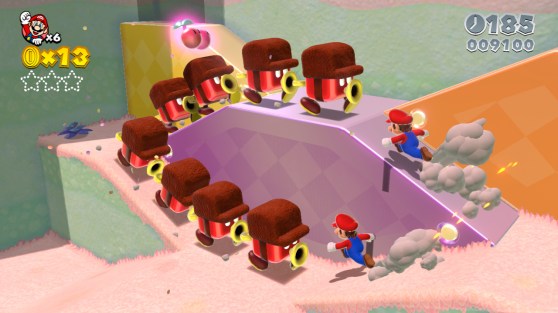 Another powerup, the double cherry, manifests up to five Mario doppelgangers. That makes it easy to quickly collect a lot of coins and jump into a herd of goomba, but in a couple of levels it’s actually the cause of Mario’s problems.

One stage steadily fed me double cherries so that I was continuously running around with five characters on screen. I had fun trying to control the flock of Marios as we took on enemies and filed one at a time into a pipe, but the secret goal of the level was to get at least four of these Marios to the end of the stage to activate a switch that would unlock one of the green stars. That meant I had to carefully work my way around while trying not to lose anyone.

It’s one of the interesting ways that the game takes something that at first seems empowering and turns it into an obstacle itself, and I love that.