I’m convinced that Nintendo made fun of me after leaving its San Francisco office last week. Or at least felt sorry for me.

Nintendo’s Mario Maker appeared in limited form at last year’s Electronic Entertainment Expo just following its announcement. Now the create-your-own-level Wii U game is just about ready to ship, with a release planned this fall to help mark the 30 year anniversary of the Super Mario Bros. series.

The company has planned a partnership with retailer Best Buy to demo Mario Maker in stores nationwide during E3 2015, and GamesBeat got an early look.

Super Mario Maker is now the official name of the game. Nintendo said that the content represents the history of the franchise, making the name more fitting. 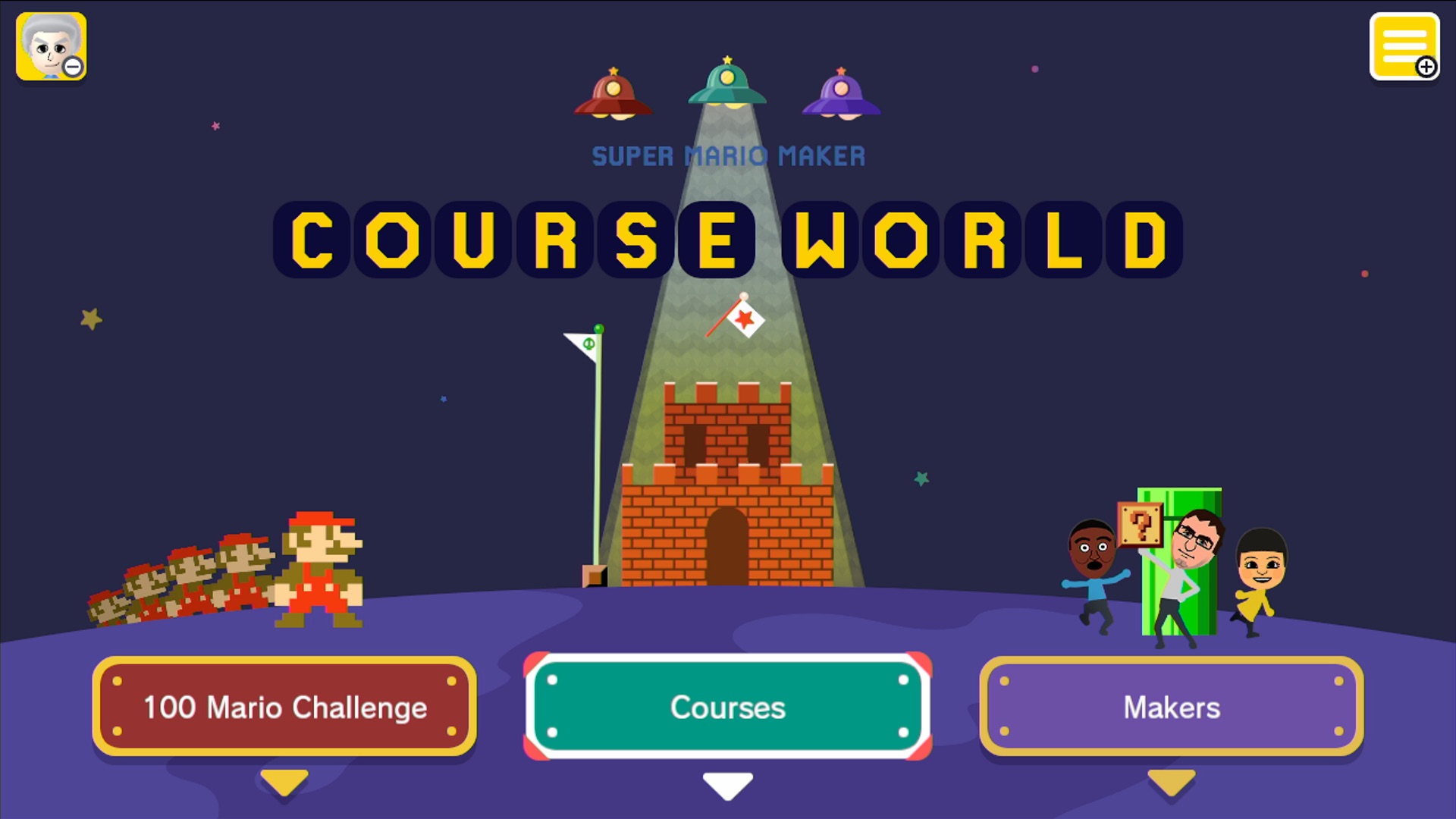 I made it clear to Nintendo reps that while I am looking forward to the creation side of the drag-and-drop Mario level designer, I have terrible reflexes and would do poorly at playing even my own levels. They thought I was being humble at first. They were supportive when I failed four or five times at a test level that the Treehouse (Nintendo’s internal product development team) staff created. The design was brilliant, starting off with a maze of pipes in which most of them looped into others — and only one permitted progression through the level. I figured it out, but I fell down pits and missed jumps due to my poor reaction time. Even so, I was inspired, and fully ready to begin creating my own levels.

Nintendo explained that this stage, called Water Surprise, was the result of a bit of crowdsourcing. It was initially created to be difficult — the staff at Treehouse are a competitive bunch — but it evolved to focus more on fun after passing off the level to others. Other players can point out faults in the design, or suggest elements to create additional challenges. The end result for this particular level is something that would be right at home in the next Super Mario release.

Another level from a Nintendo staffer used a ghost house theme for the setting. For Super Mario Maker, the haunted house-level theme from Super Mario World has been retrofitted to work in Super Mario Bros. framework, making the scary platforms and trademark Boo ghosts look like they were always in the 8-bit NES game. Fans will likely enjoy mixing up Mario’s history with these impossible combinations.

The levels are designed through a drag-and-drop interface using the Wii U’s GamePad touchscreen. Pulling down platforms, tools, enemies, and other elements from a top bar and dragging them to any spot on the screen places them. This demo had two rows of items to place, but the full game will eventually let players unlock several more rows.

Creation and editing Super Mario Maker is intuitive, and a wealth of options makes being creative a lot of fun. Dragging a lasso around several items enables you to move them together with the stylus. Holding and shaking an item modifies it — a green Koopa Troopa turtle will change to a red one, for example. A small toolset permits undo, copying, pasting, and erasing. You can toggle between edit mode and play mode freely to test your creations, too. As a weird kind of bonus, a robotic voice sort of sings with each touch and drag of the editing tools.

Super Mario Maker offers several game themes from its history as a starting point for level design, including Super Mario Bros 3, Super Mario World, and even the newer Wii U games. What’s interesting is that level designers can change these themes on the fly in the editor, which has all of the placed elements changing accordingly to fit. Mario’s abilities change as well. For example, the Super Mario Bros. 3 theme gives the player access to the leaf power-up, which turns Mario into Raccoon Mario. Super Mario World similarly features the feather power up, giving Mario a cape to fly with.

Beyond this, you get subthemes from the Mario universe that you can switch in and out to modify a level’s feel and functionality. An outdoor level can easily change to an underground one or even an underwater stage. Locations like the ghost house, castle, and airships are also available as backdrops. Each brings its own look and features. 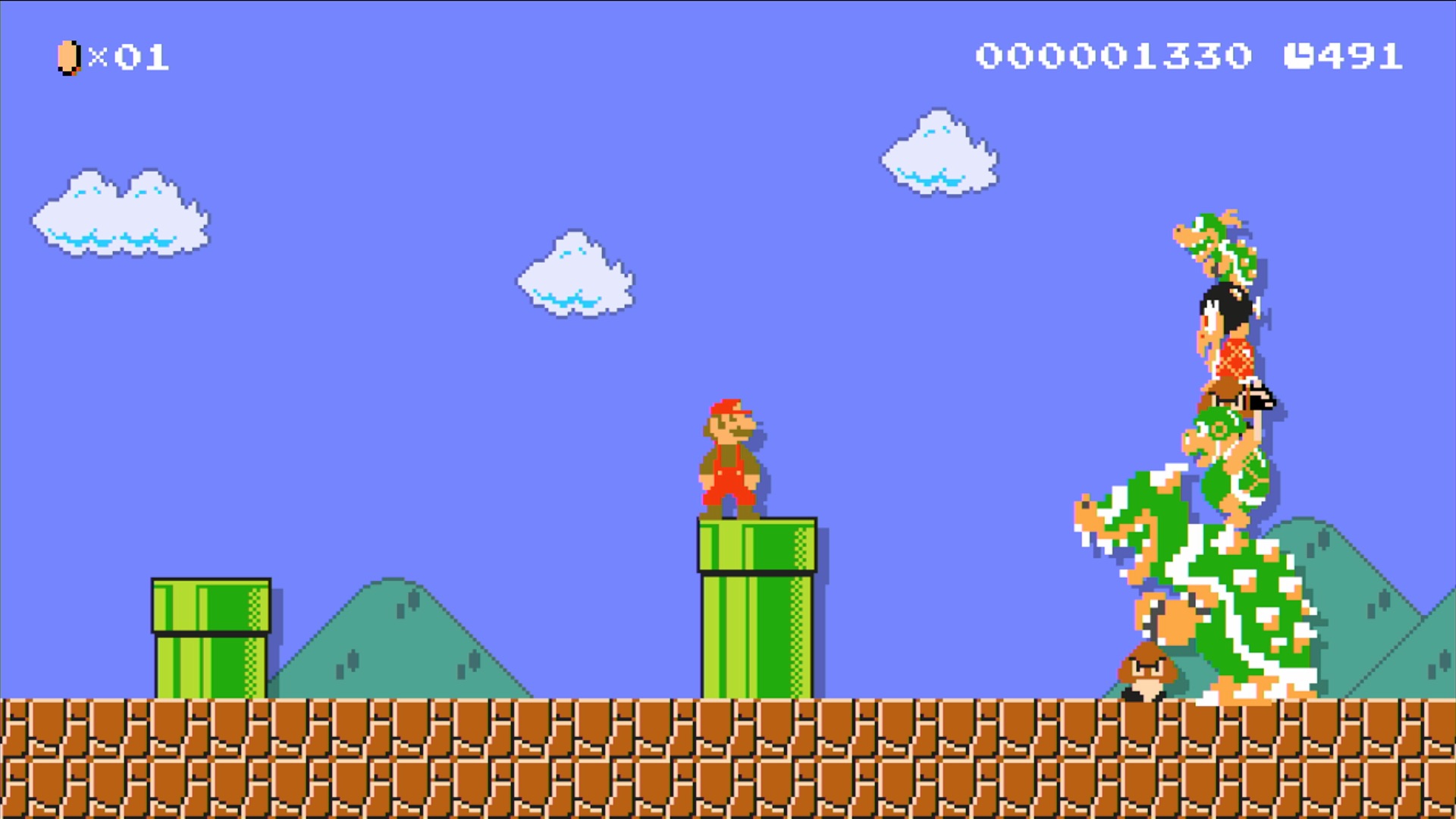 Above: Nothing’s stopping you from stacking enemies.

Nintendo hopes that the online component of Super Mario Maker will create a nearly limitless flow of content for players. The company will build and upload its own level creations, but it’s banking on the creativity of players to keep its online hub active with new challenges.

Players can search for content in a number of ways online. It highlights courses according their star rankings — you can try out levels and rank them, with the top ones rising up. It also has options for filtering by time or location, not unlike Media Molecule’s LittleBigPlanet series of games. Super Mario Maker counts how many times people download and play a level and also tracks how many have completed it. Difficulty is dynamically rated based on this count, and players can also sort by this measure.

It also has plenty of social support for sharing of your creations. Players can follow others through the game’s online system, keeping them updated on their moves or new level uploads. Super Mario Maker also generates a unique 16-digit code for each level created, letting users share their creations via social networks.

Good design is encouraged through a limitation on the number of levels that can be initially uploaded. Nintendo wouldn’t say how many were allowed at first, but did note that the more stars you earn from other players, the more levels can be sent to the online service.

Super Mario Maker lets you do things you could never have in previous games by bending the rules a bit, though it never breaks them. As a level designer, you can do crazy things like place a Goomba on top of a Koopa or hide a spring-board in a question mark block. Want a platform to fly? Just slap some Koopa wings on it. I saw a level titled “Ditch Yoshi” that had players hatching a Yoshi egg (from Super Mario World) to have Mario using him as a launching pad to reach higher platforms. Poor Yoshi would fall into the endless pit below as Mario moved on.

This demo teased a few new Mario elements, including one-way walls that force players to keep moving forward. A new mystery mushroom power-up has ties to Nintendo’s NFC-enabled Amiibo figures, permitting some interesting mashups. For example, scanning in the Kirby Amiibos transforms Mario into Kirby in the 8-bit Super Mario Bros.-themed levels. This mystery mushroom has players transforming into these Amiibo-enabled and other Nintendo franchise characters at random, with more options unlocking for the designer as they progress. Seeing an 8-bit Wii Fit Trainer running around and doing the splits was quite surprising! 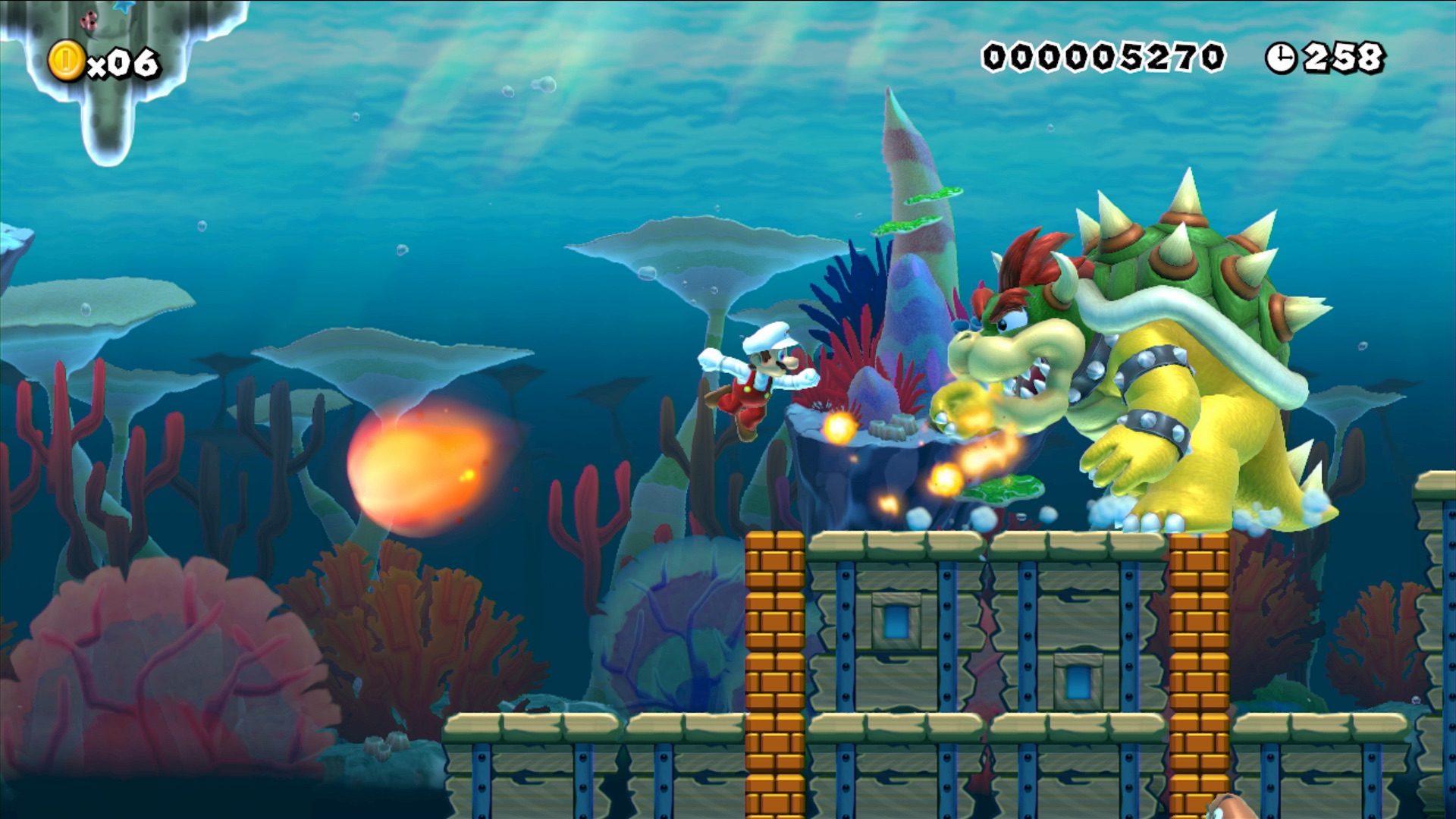 Above: You can make your levels as difficult as you’d like in Super Mario Maker.

Super Mario Maker is like an endless Mario game with its constant influx of new levels. And for creative types like myself, the designing side is like a game on its own. The combination is something special as it feels like Nintendo has owned up the Mario franchise to give all players a bit of ownership.