The 16-bit console war may have ended in the ’90s, but Sega will rise again! And at this year’s influential Electronic Entertainment Expo tradeshow in Los Angeles, we saw that Mario finally admit that he should just “borrow” from Sonic the Hedgehog instead of trying to beat him.

Super Mario Odyssey is the next blockbuster game from Nintendo, and the publisher dedicated much of its E3 booth and its livestream from the show floor to this bizarre Switch platformer due out October 27. GamesBeat reporters Mike Minotti and Jeffrey Grubb also got their hands on Odyssey, and it didn’t take them long to notice that Nintendo’s squat Italian plumber has taken some notes from Sega’s speedy blue hedgehog.

Here’s all the confirmation you need that Mario creator Shigeru Miyamoto is secretly a chili-dog-eating Sonic fan who posts his OCs (original characters) on DeviantArt under the pseudonym Shiggy-The-Porcupine:

Mario has a spin dash

Above: Mario has to pay Sonic royalties every time he does this.

One of Sonic’s most iconic moves is the spin dash. This enables the Sega mascot to begin rolling through levels at high speeds, and now Mario can do the same.

And just like in Sonic, this is Mario’s fastest move. Because, as scientists proved decades ago, curling up into a ball makes for optimal aerodynamics and unleashes the true speed potential of all living things. If you want to get through stages as quickly as possible, you’ll be depending on this move.

To be fair, Samus was turning into a ball in Metroid before the first Sonic the Hedgehog came out. Really, Nintendo is just reclaiming the body roll. There was also that whole Dillon’s Rolling Western thing that Nintendo made for the 3DS that few people seem to remember.

Above: Mario loses coins instead of a life when he dies.

Mario games have relied on 1UP mushrooms for its life system since the 1980s, but that is changing in Odyssey. Now when he dies from falling off a cliff or taking too many hits, Mario loses some of the coins he collected. Again, Mario is aping Sonic, who has always lost rings when he takes damage or dies.

Now, it’s not the exact same system. In Sonic, Rings are also your health. You only die if you take a hit when you’re not holding any, and you have a chance to reclaim lost rings for a few seconds after taking damage. In Odyssey, Mario only loses his coins if he suffers an instant death (like falling in a hole) or if he gets hit with no more life left.

But it’s odd to see coins take on such a different role. In most Mario games, you just collect them because getting 100 of them earns you an extra life. In Odyssey, you use them to buy items (including snazzy new outfits) on top them replacing the old 1UP system.

Mario is now hanging out with humans 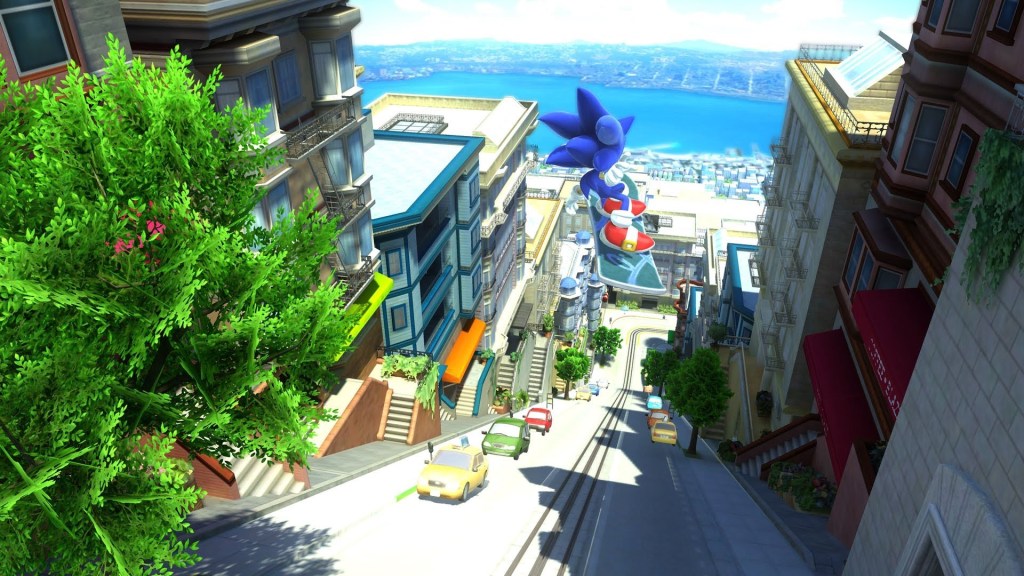 Above: This must be Old Donk City.

One of the showcase worlds from Super Mario Odyssey is New Donk City, an urban environment with normal-looking humans. This is the first time we’ve seen anything like this in a Mario game, but this is old material for Sonic. A human-occupied city served as the hub worlds for Sonic Adventure, and Sega’s hedgehog traveled to another human city in Sonic Adventure 2, and he also hung out next to humans.

But proportional humans made their strongest and most infamous appearance in Sonic the Hedgehog (2006), the low point of the entire series. Again, a city served as a hub world, with Sonic and his cartoon buddies talking to realistic humans with no sense of irony.

That’s how Mario has an advantage. Yes, Odyssey’s humans look a lot like Sonic 2006’s, but Mario doesn’t seem to be taking the whole thing too seriously. He can even throw his hat on some people to possess them. And New Donk City isn’t a hub; it’s a level full of hidden paths and platforming challenges. Sonic 2006’s city was a mess of minigames, fetch quests, and loading screens.