Mario is … well, he’s Mario. He’s gaming’s biggest icon. The Italian Plumber is the star of some of the most important and best games in the industry: Donkey Kong, Super Mario Bros., Super Mario 64, Super Mario World, and Super Mario Galaxy.

Super Mario Odyssey, which comes out for the Switch on October 27, is better than all of these.

I do not say this without some serious contemplation. I’ve been a fan of Mario all of my life, especially his 3D outings. Super Mario 64 and the Galaxy games are some of my all-time favorites.

Yet Odyssey outclasses them with its giant scope and boundless creativity. Even in a year with The Legend of Zelda: Breath of the Wild‘s release (the only game to get a 100/100 so far this year from GamesBeat), this is the single most important game you can own on the Switch. 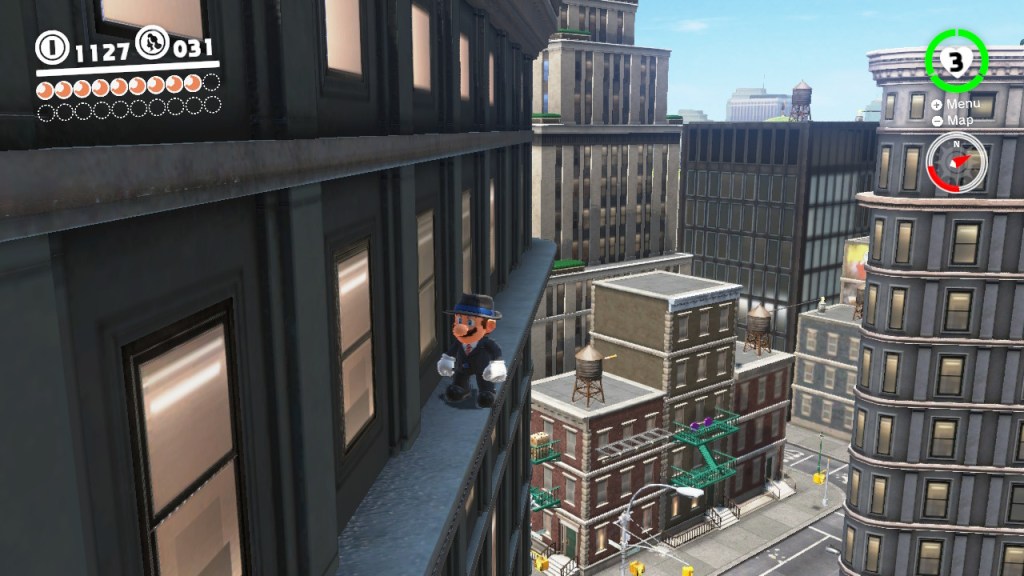 Above: Yes, this is a Mario level.

Super Mario Odyssey returns to a formula established in Super Mario 64. Each world is like a playground full of objectives. Completing these gives you Moons (similar to Stars in Super Mario 64). You need Moons to advance to new levels and finish the game.

But while Super Mario 64 had a total of 120 stars, with each world hosting seven, Super Mario Odyssey has many Moons. After more than 25 hours of playtime, I’ve collected more than 500 of them and still have a long way to go. A single level can have more than 50 Moons hiding in it. And these levels are big, each containing dozens of paths, secrets, and entrances to extra areas.

This gives you a ton to do. And unlike with Super Mario 64 or Super Mario Sunshine, Odyssey doesn’t kick you out of a level once you get a Moon. You can keep running around, exploring, stomping enemies, and solving puzzles as you rack up enough Moons to make Jupiter jealous.

Collecting them isn’t a chore. Every Moon you get is a little rush of joy. They’re rewards for feats of platforming bravery, creative puzzle-solving, or defeating a difficult boss. You can earn them in an almost endless amount of ways. They may hide in plain sight in some hard-to-reach area. A helpful dog may lead the way to a buried Moon. You’ll also often come across doors and other portals that you lead you special rooms designed around puzzles or obstacles.

Even after the credits roll, you’ll have a lot to do. You unlock more costumes and even levels by collecting more Moons. Days after I defeated the final boss, I’m still putting hours into Odyssey as I try to unlock every Moon. I’m not doing this for the sake of being a completionist. I’m doing it because I’m having a blast. 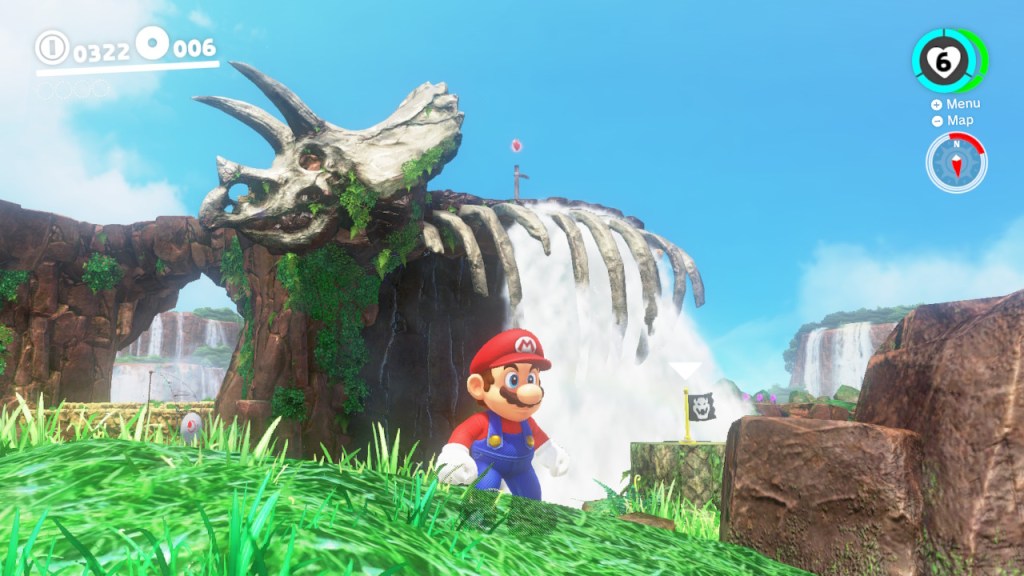 Above: Worlds are a joy to explore.

Super Mario Odyssey isn’t just some beefed-up version of Super Mario 64. It introduces a new core mechanic, capturing, that adds variety and creativity. By throwing your hat on certain enemies, characters, or even inanimate objects, you possess them. First off, it’s amusing just to see all of these different things become Mario-ized (every captured object wears the iconic Mario hat and mustache). But they also give you new abilities.

Capturing a Bullet Bill lets you fly a short distance before exploding. Taking over a Tyrannosaurus rex makes it easy to smash through rocks. You can even posses a big rock just to move it out of the way and unlock a secret path.

Odyssey has a ton of different things that you can capture. Many of them open up new gameplay styles, helping you finish puzzles and access new areas. You need this to complete many parts of Odyssey, including some boss fights. It helps Odyssey switch things up and stay fresh. 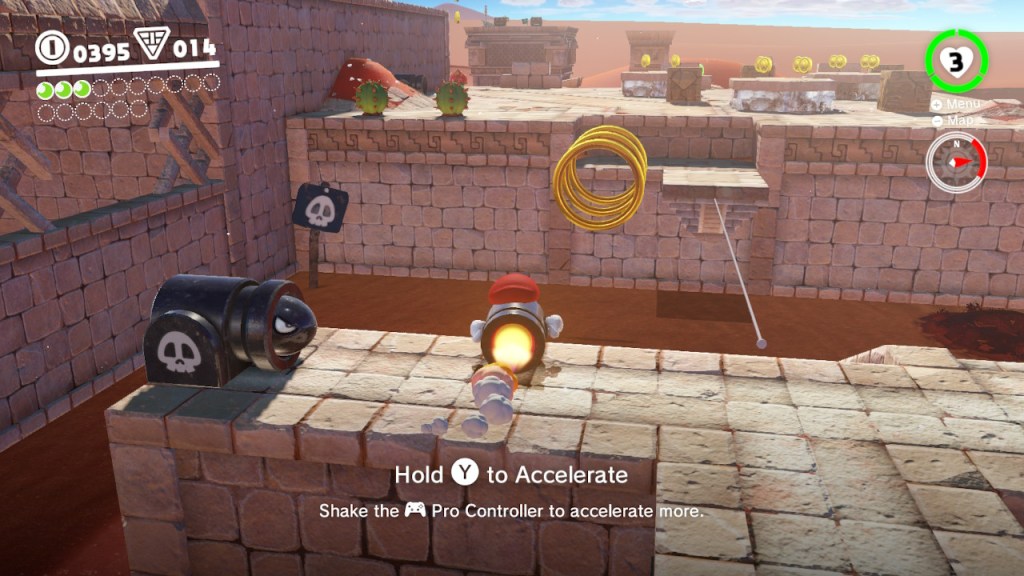 Above: Now you’re the Bullet Bill.

Crisp, responsive controls are the hallmark of 3D Mario games. Odyssey’s feel better than ever. Accidental deaths are uncommon. I have complete control over Mario. And once you master his arsenal of maneuvers (which is huge), you can complete incredible feats.

And Nintendo rewards you if you’re creative with your jumping. You could take a long route through enemies and other platforms to reach a high-up place. Or you can find a wall, side jump onto it, wall jump off it, throw your cap in midair for a little extra boost, turn around, and then dive jump from midair to reach the top of the wall. Pulling off these advanced maneuvers makes me feel like some kind of platforming wizard, and I love it.

This is the best camera a 3D Mario game has ever had. It’s more dynamic than the one in Super Mario 3D World (which mostly stuck to one angle), and it still gives you control. You can move it around with the right stick, but it also contextually moves itself for specific areas. Sometimes you’ll be in places when a top-down angle is more beneficial, and the camera will make a clean transition to that view. The camera never snaps into a strange place with no warning and causes you to die. 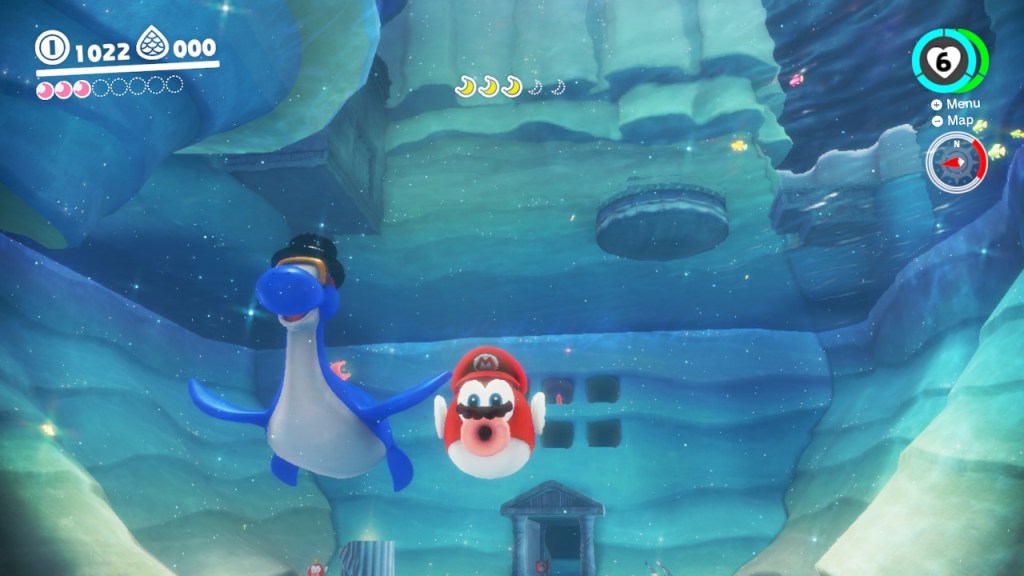 Above: Being a fish makes it easier to swim.

Odyssey is the most gorgeous Mario game ever. Levels come in a lot of varieties and feature gorgeous vistas, stunning waterfalls, and dazzling colors. The worlds are also creative. Odyssey doesn’t just stick the usual “fire level, water level, grass level” formula. We’ve never seen such stages in Mario before: the metropolis New Donk City, a wooded area filled with robots trying to grow flowers, and a kingdom of sentient utensils obsessed with food.

The game is also a great technical showpiece for the Switch. I can’t notice any major performance differences when playing Odyssey in handheld mode. Remember when Super Mario 3D Land was a novelty when it came out for the 3DS in 2011? It seemed crazy to play a 3D Mario game on a portable system, even if it did have to make some compromises. Now the newest and best Mario game is playable on the go, and it looks stunning.

Odyssey runs well in both docked and portable modes. I never noticed any framerate dips. 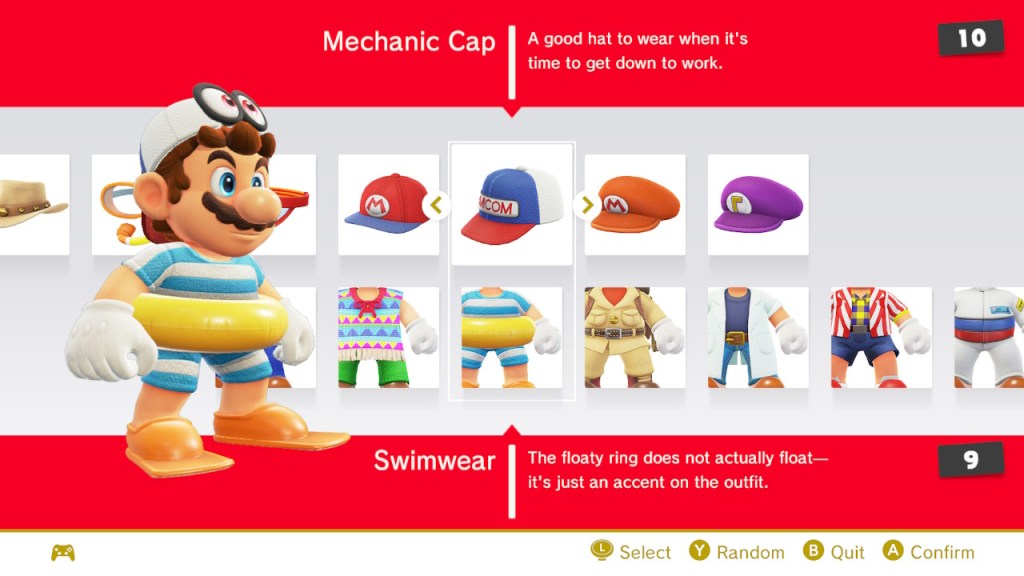 Above: So many outfits!

Every world has stores that sell costumes. These are mostly cosmetic, but they make for fantastic collectibles. Many of the outfits reference Mario’s past, but some of them are just goofy, fun, and sharp. Collecting all of the outfits gives you another incentive to keep exploring, collecting coins and Moons. 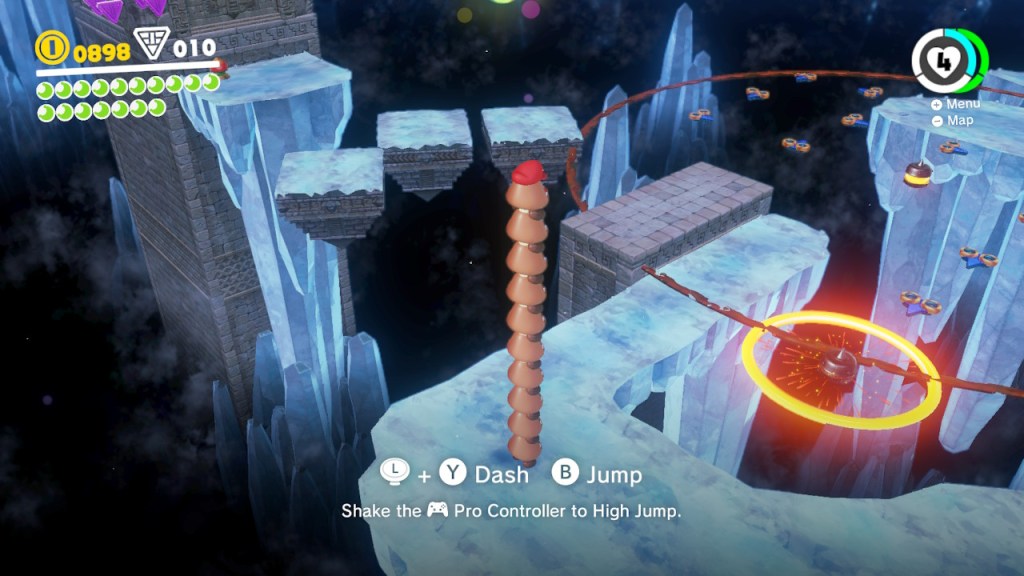 Above: Many Goombas are better than one Goomba.

Super Mario Odyssey captures the best parts of Mario’s past 3D adventures. It has Super Mario 64’s open design while matching Super Mario Galaxy’s sense of awe. But the capture mechanic gives it a creative edge.

It’s a huge game. Even once you finish the Odyssey’s final boss, you’ll want to go back to levels to keep exploring and collecting Moons. Thanks to the sharp controls, large worlds, and creative quests, boredom feels like an impossibility.

This is another Mario all-time classic that we’ll be remembering and celebrating for decades to come.

Super Mario Odyssey comes out for the Switch on October 27. Nintendo gave us a digital copy for this review.