Mario Party is due a renaissance. It hasn’t felt all that much different since it debuted on the Nintendo 64 way back in 1998. You now have motion controls and online multiplayer, and in the tabletop world, hundreds of new games have popped up that encourage folks to play together without relying on random die rolls or card pulls.

Super Mario Party for the Nintendo Switch taps into this better than any previous game in this long-lived series, and it’s no surprise that it’s also the most enjoyable party game Nintendo has ever made, one that makes the best use of the Nintendo Switch’s Joy-Con motion controls and the console’s cooperative play spirit.

And it’s the best gateway into the series for kids because it gives you meaningful ways to play together or against one another without spending an hours-long slog on that virtual game board.

You can find out for yourself just what a pleasure these new modes are to play when Super Mario Party launches October 5.

One of my favorite new editions is river rafting. You and up to three friends get into an inflatable raft, two to a side, and you paddle your way down the rapids with the Joy-Con controllers, avoiding rocks. It’s on a timer, and you earn more time by playing minigames. You drive (or jump) your boat into balloons that float above the river to get into these minigames.

You can also choose different routes, and this determines the obstacles you face, making the mode feel like a different experience every time you grab a paddle.

What’s great about these games is that, like paddling the boat, they’re all co-op experiences. You’re working together with family and friends (in this case, my partner and children), not against them. You all share in the fun, regardless if you win or lose.

Contrast this to the board game portion of Super Mario Party. In the first 10-round game, the four of us played against each other. We moved around the board and played minigames together. But my 6 year old wasn’t having all that much fun. He’s not as dexterous and skilled as the rest of us, and he ended up crying at the end because he was so far behind his older brother and the adults.

But when we played the river rafting mode, he had a blast the entire time — because he was helping. Because he was part of the team. Because we were having fun, winning or losing together. And that’s the key to a good party game.

Super Mario Party has added the soundstage, which consists of rhythm games set to music. And guess who runs the joint … it’s Waluigi. Turns out he’s an ideal impresario for this musical mayhem.

Here, you take part in a series of rhythm minigames. In some, you’re matching lights or dance moves. In others, you’re using a cartoonish hammers in a whack-a-mole-like affair or pulling a tablecloth from underneath a stack of glasses. These all use the Joy-Con’s motion controls, and my family had a blast trying to match the beats.

The only problem wasn’t even a real issue — my youngest thought he had to dance just like Waluigi, not merely match his moves. “It’s hard keeping up with that crazy purple guy!” he shouted out. I laughed and nodded my head, my heart lifted by his adorable approach.

Super Mario Party is in desperate need of life for its board game. I’m sure a number of you enjoy this, and I have little doubt that a similar amount of folks don’t care for it, either. Nintendo has made some changes, such as adding a new sort of character-specific die that you can use instead of a normal one. It’s not a typical six-sided cube, and it offers a risk-reward — it may have nothing but low-and-high numbers, or it may have 4-5-6 on its faces — that may seem good until you find yourself rolling into loss-3 or trap spaces.

You also get allies who roll dice alongside you. It didn’t make the board game feel all that different to me. 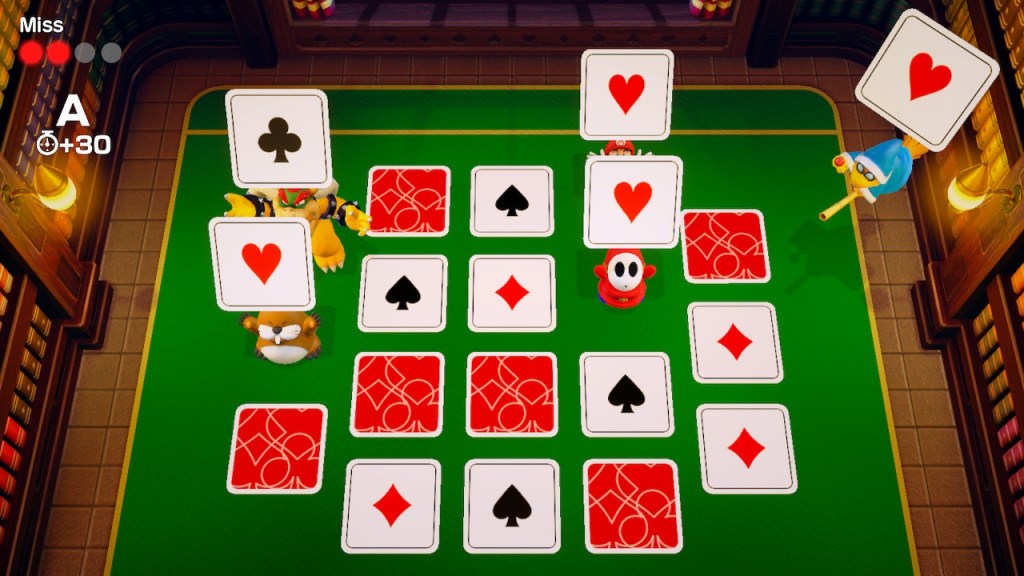 Above: We had some issues with this Memory-like card game.

All this, I find, just doubles-down on the random number generator (RNG) annoyance of games where you roll dice to move around the board. You don’t have much control over this until you get to a minigame, where you can use some skill. Sure, moving around the board and choosing paths does take some strategy, but when that depends on a random roll of a die, it feels more like chance, not your tactics, determines the way to victory.

And it just takes so long to play even a 10-round game. I’d rather do a river run or mess around on the soundstage where no one has to wait to take their turn than play through the board game.

Super Mario Party has 80 minigames. You unlock some by playing the various modes. But even after playing a couple of river runs back-to-back, I started to feel some déjà vu. Some of the minigames are a lot of fun no matter how often you play them, like the one in which four players work together to catch Cheep-Cheeps in a fishing net. Others wear on you, such as the Memory-like card game.

This is part of the nature of party games, especially when you play with the same group. The key here is to switch how you approach the various modes or to play with other people. Or to embrace the fun of play, remembering that each experience can be unique.

Even if you’re trying to get the fireworks through the treacherous path to the cannon for the 50th time. 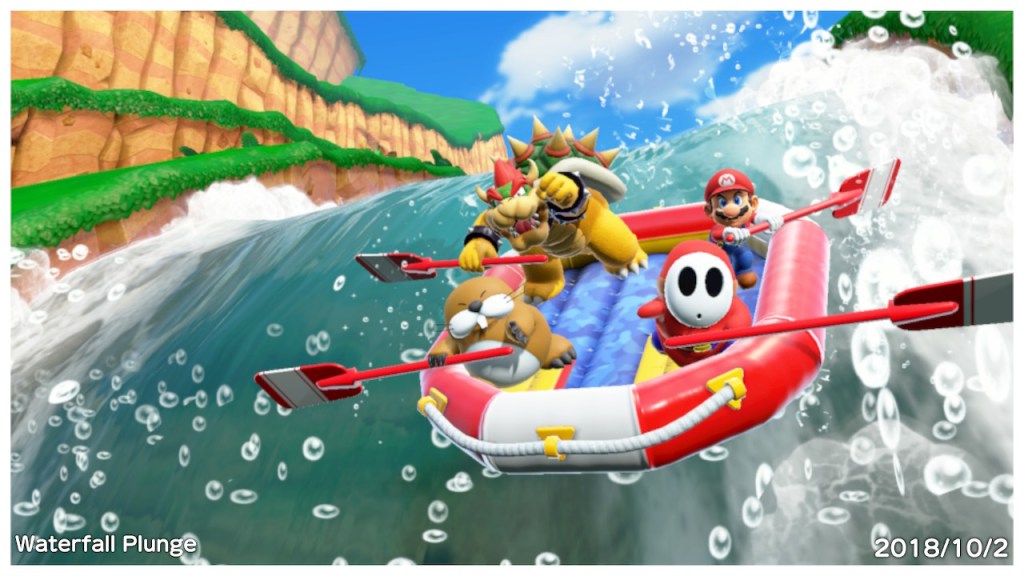 Above: A Koopa Paratroopa will try to capture a cool picture of you going down the falls.

Super Mario Party’s new modes offer a welcome break from what some might consider the main attraction: the board game. They’re faster, and they focus on two of the Nintendo Switch’s strengths that make it such a special console in the first place — good Joy-Con motion controls and fun co-op play. For me, it makes this Super Mario Party the best in franchise history, even if I don’t care for the staid board game.

You can even play all the minigames you’ve unlocked in their own mode. And regardless how we played, all I have to do is remember the smiles, the laughs, the excited “OMGs” that my kids blurted out as we played. So really, I don’t have much reason to complain about the board game portion after all.

Even if it made my youngest son cry.

Super Mario Party comes out October 5 for the Nintendo Switch. The publisher gave GamesBeat a digital download code for the purposes of this review.