The idea of Nintendo making mobile games used to terrify me. Now that I’ve played Super Mario Run, I realize that fear was silly.

Super Mario Run is available to download now for iOS devices running iOS 8.0 or later. You can try it for free, but you’ll need to spend $10 to unlock the full game. I used to think that Nintendo making mobile games would be some kind of sign of defeat for the Japanese game maker. But at as it enters the field, it does so with an easy-to-play game like Super Mario Run.

Nintendo couldn’t ignore the $36 billion mobile market forever. It released its first app, Mittomo, earlier this year. But that was more of a social experience than an actual game. Super Mario Run is the real thing — a Nintendo mobile game. And Super Mario Run shows we have nothing to fear from that prospect. This company can make good games no matter what platform it’s working on. 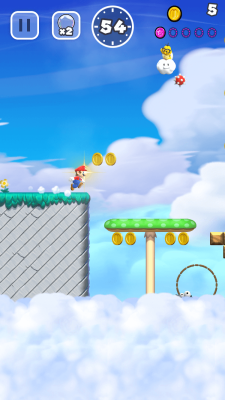 Above: A good time to jump.

Super Mario Run looks like a traditional 2D side-scroller. Your goal is to move through a flat world while avoiding obstacles. Usually, side-scrollers give you complete control of your character. You can go left, right, stop, jump, or whatever. In Super Mario Run, however, Mario never stops moving (the endless runner portion of the program).

You only have one input: tapping on the screen. This will make Mario jump, hop over enemies, or bounce on them. One button might seem too simple, but the challenge comes in the timing. You need to jump at the right moments in order to leap gaps, hit enemies, and collect coins.

We’ve seen the auto-runner style of gaming on mobile before, and it’s a good fit for Mario. The jumping is fair and responsive, so you know that death you experience is your own fault.

Easy to get into

Since you only have one button, Super Mario Run doesn’t have to waste a lot of time explaining itself to you. You play a trivial tutorial in the beginning that explains the basics of Mario’s movements. After that, you’re just playing. No cutscenes, pop-up text, or excessive dialogue bubbles.

Everything you love about classic Mario games  is in Super Mario Run. Mushrooms, coins, goombas, koopas, those weird hills, and that jerk who throws things at you from a cloud. This does not feel like some cheap, mobile cash-in. The sights and sounds all scream “Mario.”

The plumber hasn’t become an industry icon for nothing. The excited noises he makes while smashing an enemies face in can do the heart good. Mario games have a special ability to put smiles on faces, and Super Mario Run brings that appeal to mobile. 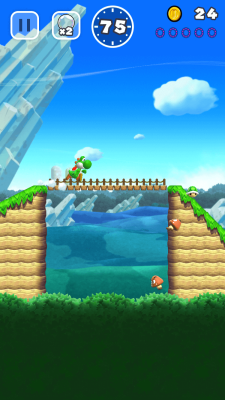 Above: Yoshi can get in on the running too.

You can beat Super Mario Run’s 24 levels in a couple of hours. From start to defeating Bowser and saving the princess, it’s a short game.

Now, it does give you a reason to play these levels multiple times. Each one has five special coins in them. Get them all of them in any stage, and you have to collect a new set of five coins placed in trickier locations. Each level has three of these challenges, and it’ll take you a lot longer to beat all of them than it does to run through the campaign. So, it kind of has three times as levels as it first looks.

But I would like more. The coin challenges give you a good reason to replay levels, but it’s familiar content. Also, the gauntlet of stages ends right when they feel challenging. Traditional Mario platformers have an excellent difficulty curve, starting at easy before testing you with more difficult levels. I was hoping that Super Mario Run would throw some ridiculous stages at me, even if they were bonuses or extras unlocked after beating the game. Instead, you have to depend on those coin challenges if you want a harder experience.

For some reason, you can build up your own Mushroom Kingdom. I’m not sure why this exists other than because other town-building games are popular on mobile. It feels like a system designed to take advantage of in-app purchases, but those don’t even exist here. 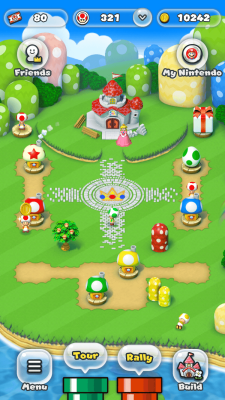 Above: This part actually looks like the Nintendo mobile game I feared we’d get.

Instead, in order to build anything, you need Toads. You unlock Toads through a special game mode that has you competing against other players’ (or just a really stupid AI from Nintendo’s) ghost data. Do better in the level, and you get more toads. Once you have enough Toads, you need to spend some coins (which you’ll have plenty of) to place a new house or decoration.

Now, some of the buildings you can make do unlock new playable characters for the game, including Luigi and Yoshi. That’s neat, and they actually do play a little differently from Mario (Yoshi, for example, can slighty hover after a jump). But I feel like it would have felt just as good to unlock these characters with the coins you collect while playing. I’m not sure what most of the buildings do besides look nice. And collecting Toads means that, once again, you’re replaying levels. Seriously, after a few hours, you’re going to have the layout of most of the game’s stages memorized.

This whole Mushroom Kingdom thing is the part of the game that feels the most “lazy mobile” to me.

Yes, I wish it had more levels and less town-building, but Super Mario Run manages to feel like real Mario game even with only one button. It’s great to see that Nintendo is able to do so much with such a simple idea that most iOS users can easily pick up and enjoy.

I just wish there was more of it.

Super Mario Run is out now for iOS devices. The publisher provided us with early access to the app for this review.