You can now let a stocky Italian plumber do your talking for you on iOS. 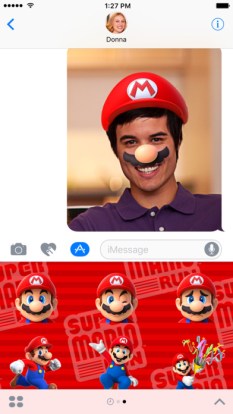 Above: Donna is gonna love this!

Nintendo has launched the official Super Mario Run Stickers for Apple’s iMessage service on the iOS App Store. You can download this pack and then get a number of stickers showing Mario performing a number of actions and poses. iMessage is Apple’s texting application, and it supports countless stickers. But this is the first time that Nintendo has come out with support for something like this. Of course, these stickers are only a prelude to the official launch of Super Mario Run on iOS in December before hitting Android at a later date. With Mario, Nintendo is taking on the $36.6 billion mobile-gaming industry head on.

Super Mario Run is a premium-priced auto-runner that will have players tapping their way through courses to make the Mushroom Kingdom hero avoid obstacles and enemies. Players will compete for high scores and fastest times through tons of levels.

The Japanese publisher announced Super Mario Run onstage at Apple’s iPhone event last week. Mario is its biggest franchise, and this is a clear indicator that it wants to start generating serious income from iOS and Android. Shigeru Miyamoto, Mario’s creator, introduced the app himself, and he explained that the company wanted to offer it at a premium price to avoid some of the pitfalls of free-to-play game design. Those can include making people feel pressured into spending money just to compete with others.

Despite charging for the full game, Nintendo plans to launch it as a free download in a demo form. And analyst Serkan Toto thinks that smartphone and tablet owners may download it more than 1.5 billion times.