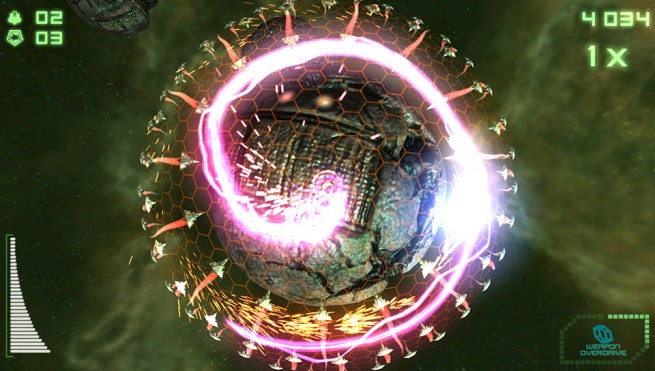 Super Stardust HD saved the PlayStation Network at a time when Sony’s downloadable lineup was severely lacking. The dual-stick shooter gave Xbox Live Arcade’s beloved Geometry Wars a run for its money and managed to bring some fresh elements to basic score-driven gameplay that has been at the epicenter of arcade games for decades.

Super Stardust Delta doesn’t make any leaps or bounds over its predecessors, but it does inject a few interesting twists and turns. For the most part, everything is business as usual: You pilot a ship on the atmospheric grid of a relatively tiny planet (what is this–a planet for ants?!) and shoot everything you see. Screenfuls of asteroids and alien enemies will drop down every few seconds, requiring you to efficiently swap between your ice- and fire-based weapons while navigating the treacherous onslaught of moving obstacles.

Typically you’d be equipped with a special bomb attack in these types of games — particularly useful for those emergencies where you’re backed into a corner — but Delta ups the ante with two new super weapons: a blackhole (which sucks all enemies and asteroids into a swirling vortex of destruction) and a 360-degree homing-missile barrage (somewhat reminiscent of the same attack in Treasure’s Bangai-O). Your use of these special weapons is very limited, but they do add some nice visual and strategic variety to the already excellent Super Stardust formula.

By default, Delta requires the use of various Vita hardware gimmicks (touchscreen, accelerometer, rear touch pad, etc.) to deploy the super weapons, but you can thankfully reroute them all to the directional pad or face buttons. Or purists can disable the new features and Vita-exclusive controls altogether during Arcade mode. The game is so frantic to begin with that trying to rub your screen or shake your Vita when facing impending annihilation from all directions turns out to be more trouble than it’s worth. Plus, if you’re like me, you rest your fingers on the back of the Vita (this is also known as “holding”), but with the rear touch pad activated, this will cause you to unintentionally launch a black hole, usually when there’s no one even around to get sucked into it.

To further “showcase” the Vita’s various annoying tricks, you unlock bonus modes each time you complete a planet in Arcade mode. If you were wondering just how much the Vita can imitate a bunch of crappy iPhone games, look no further than the Crush!, Disc Slide, and Orbit Bomber minigames. Two of the more interesting ones, however, transcend mere tech demo status: Rock & Roll, where you tilt the Vita to steer an asteroid toward green cores while avoiding hazards (think Marble Blast Ultra), and Trucker, where your ship must latch onto asteroids with a tractor beam and use momentum to swing around and destroy targets for points. These minigames aren’t going to replace the main attraction, but at least two of the five are worth getting sidetracked when you’re looking to spice things up.

Visually, Delta’s dated PSN aesthetics aren’t particularly sharp, but the effects are still satisfyingly flashy, with non-stop explosions, lasers, and asteroid chunks flying everywhere. The soundtrack in the original Super Stardust really stood out for me, and the same can be said of Delta. The thrilling techno tunes are as frenetic as the gameplay, effectively fueling the entire experience and adding several whole levels of immersion in a way that few soundtracks do.

Conclusion
Fans of Super Stardust should know what to expect by now. Super Stardust Delta does not reinvent the genre, but it does offer a few new tricks on top of an already immensely enjoyable package, all for an extremely reasonable price. If you own a Vita, there’s no reason not to add this stimulating twin-stick shooter to your collection. Score: 80/100

Super Stardust Delta was released for the PlayStation Vita on February 15, 2012. A copy of the game was provided by the publisher for the purpose of this review.