Supercell announced strong 2016 revenue and earnings today, but it didn’t break out the performance of specific games. Thankfully, mobile measurement firm Sensor Tower has done that for us, and it shows that Clash Royale generated more than $1 billion in less than a year on the market.

Supercell launched Clash Royale on March 2, 2016. With $1 billion in revenue, it accounted for a good chunk of Supercell’s $2.3 billion in revenue during calendar 2016. The chart below shows that the simple real-time strategy game on mobile devices has grown faster than Supercell’s other big hit, Clash of Clans, which launched in 2012. 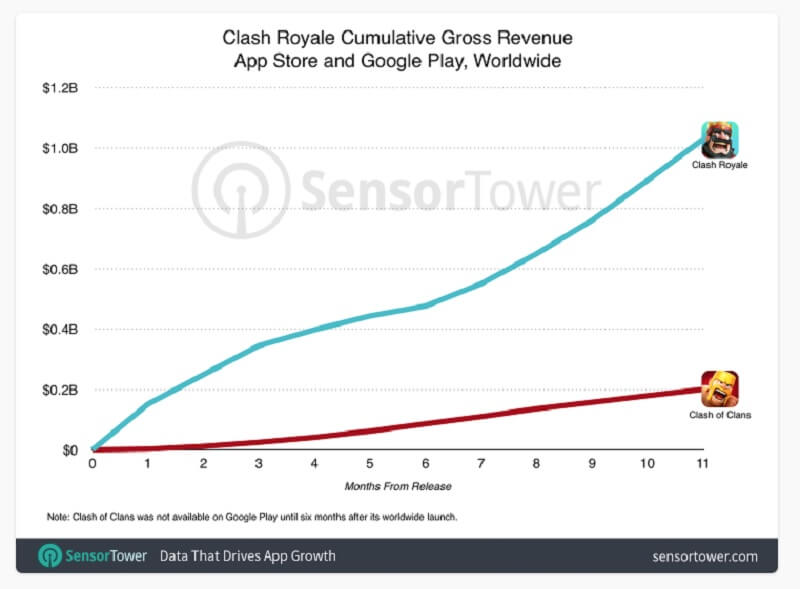 Randy Nelson, the head of mobile insights at Sensor Tower, wrote that in its first 11 months of availability, Clash Royale has grossed approximately five times as much as Clash of Clans did during the same length of time.

“Even considering the lack of an Android version of Clash of Clans in its first six months, the difference is staggering — and shows how far not just Supercell, but the ability of free-to-play mobile titles to generate revenue from in-app transactions, have come in four short years,” Nelson wrote.

Clash Royale maintained its position as a top earner throughout 2016, even in the presence of rival Pokémon Go, which also generated more than $1 billion in its first year.