Market insight group SuperData announced today that consumers spent $9.8 billion on digital games in December. This is a new high, and it’s up 8% from December 2018.

All of the growth happened with mobile gaming, which increased 28% compared to the previous year. That offset the drops from consoles (down 25%) and PC (down 4%).

Consoles saw a falloff because Fortnite was peaking in popularity back in December 2018. This year also saw fewer big releases as many publishers are getting ready for the release of new machines, the PlayStation 5 and Xbox Series X, later this year.

You can see the top earning games of each platform below. 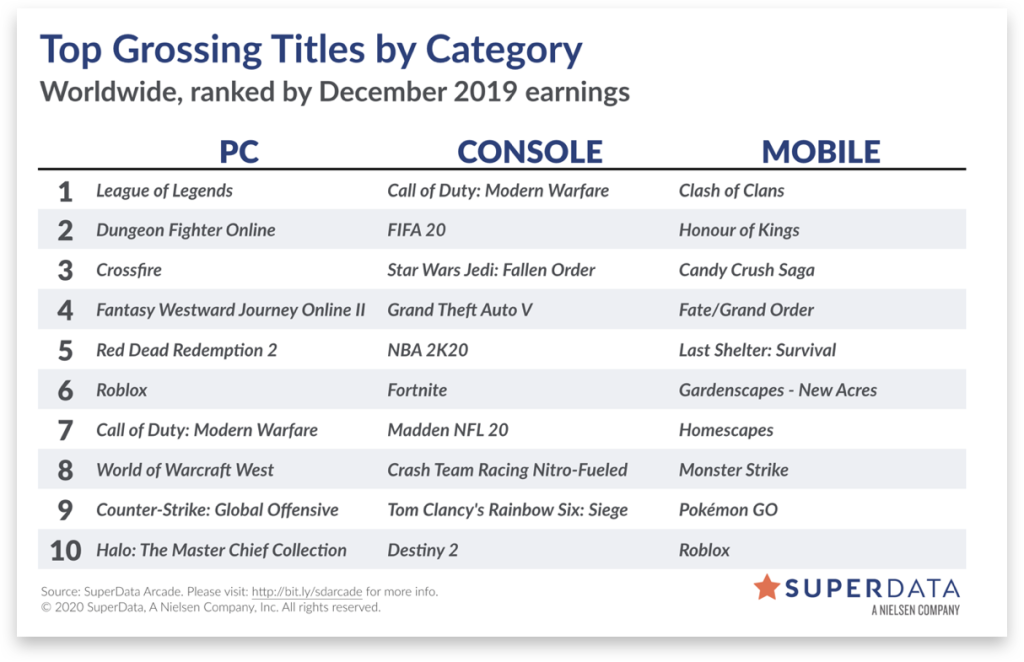 Clash of Clans has been a mobile hit since it debuted in 2012. Despite its age, the Supercell game had its best month ever in December. League of Legends, which has been around even longer (it debuted in 2009), was tops for PC. Call of Duty: Modern Warfare, which launched in October, was No.1 for console games.

Modern Warfare was the first Call of Duty game to monetize through a battle pass instead of paid map packs or a season pass. Players spent $78.7 million on Modern Warfare in December. That is almost as much as its predecessor, Black Ops 4, made in all Q4 2018 (about $92.9 million).

Grand Theft Auto V, which came out in 2013, still ranked at No. 4 on consoles. It earned $84.7 million across both console and PC. This is the game’s best month since December 2017. Meanwhile, another Rockstar title is doing well on PC. Red Dead Redemption 2 was No. 5 in that category following its PC launch in November.