Fortnite now has more monthly active players than Rockstar Games’ perennial top-10 title Grand Theft Auto V. Though Epic’s last-player-standing game doesn’t cost anything up front, it does successfully tempt its players with in-game purchases. The only game where players spent more money was Sledgehammer Games’s Call of Duty: WWII, which is still the top-grossing game on consoles.

PUBG Corp.’s rival battle royale game, PlayerUnknown’s Battlegrounds, sold over 2.5 million copies. SuperData reports that sales on PC are continuing to dip for that title, but it’s still selling steadily on Xbox One. It launched on that console on December 12 and sold over 3 million copies in its first month. 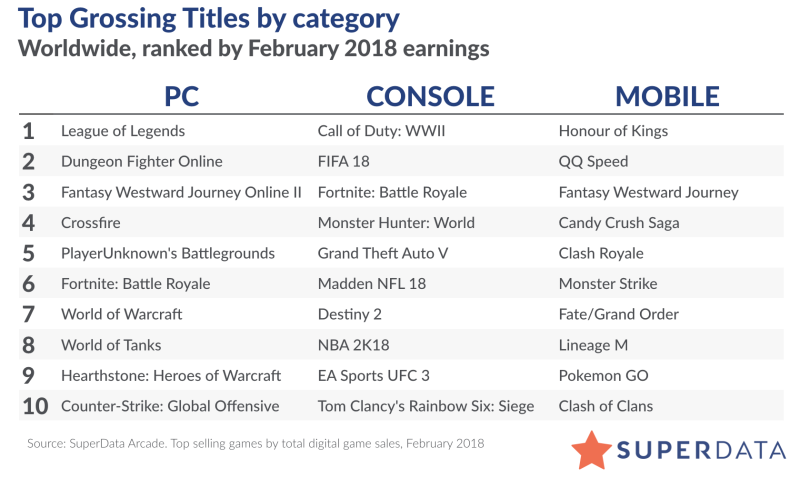 Free-to-play console games showed the biggest year-over-year growth, but paid console games also increased 34 percent, premium PC sales grew 33 percent, and mobile increased 4 percent. In the mobile world, Tencent’s Honor of Kings (relaunched as Arena of Valor in the West) still reigns supreme, but the massively popular multiplayer online battle arena has a hot contender on its heels — QQ Speed, which is also from Tencent. The Chinese publisher’s new racing title jumped up to the No. 2 spot after launching in late December.