Loot box fiascos and downvotes aside, multiplayer games are selling well. Digital video game spending was 15 percent up year-over-year in October, according to industry analyst SuperData Research. Sales on PC, consoles, and mobile totaled $8.5 billion, as compared to $7.4 billion in October 2016. This is thanks to the success of multiplayer games like the popular battle royal shooter PlayerUnknown’s Battlegrounds, which sold five million copies last month. Bungie’s Destiny 2 PC launch on October 24 also bumped up digital sales on PC by 28 percent.

All the top-grossing games last month were multiplayer — Riot’s League of Legends nabbed the top spot for PC and Electronic Arts’ FIFA 18 was No. 1 on consoles. Mobile sales were up 19 percent year-over-year last month, and at the top was Tencent’s multiplayer online battle arena Honour of Kings. 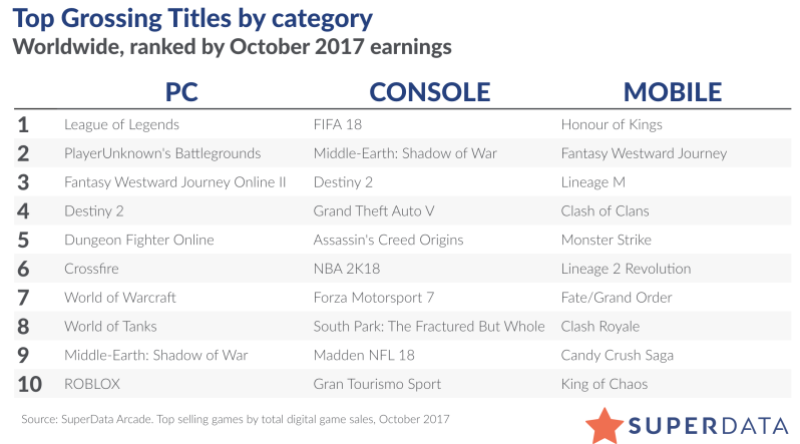 However, single-player games didn’t do too shabby last month. Nintendo’s Super Mario Odyssey sold 191,000 copies, the biggest Switch digital launch to date. Ubisoft’s South Park: The Fractured but Whole, Monolith’s Middle Earth: Shadow of War, and Ubisoft’s Assassin’s Creed: Origins collectively brought in $160 million from full game sales. Shadow of War also sits at No. 2 on the top-grossing titles on console. SuperData notes, though, that these games may struggle later on as they may have trouble incorporating microtransactions.

PUBG will launch on the Xbox One on December 12, it’s partnered with Tencent to publish a mobile version. However, it might see its success stymied by imitators. Epic Games’s Fortnite: Battle Royale grabbed 10 million players in just two weeks, and there are plenty of clones in the mobile app stores like Battle Game Royale, Battleground’s Survive, and Pixels Unknown Battle Ground.