In SuperData’s ranking of the best-selling games last month, PUBG is beating out Fortnite on PC as the two sit neck-and-neck at No. 5 and No. 6. However, it’s missing from the console rankings, likely because it’s an Xbox One exclusive. Fortnite is ranked No. 5 in the top 10 best-selling games on console, and it broke its own record for engagement. 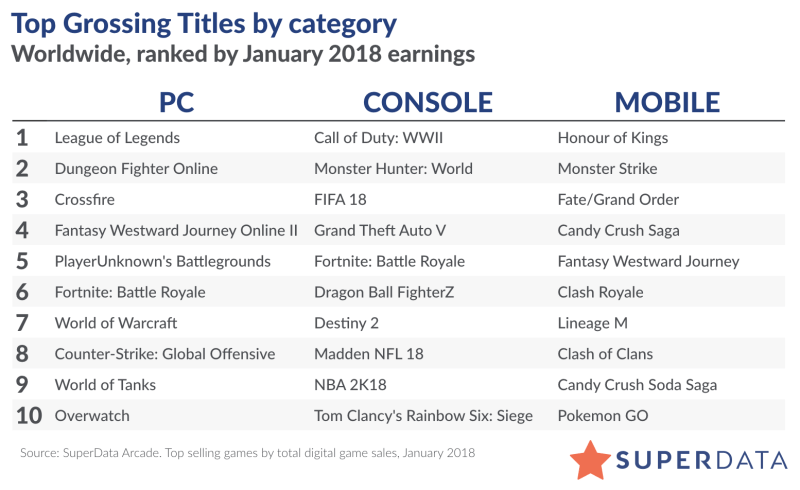 Epic’s last-player-standing game has over 40 million players, and it recently rolled out its Season 3 Battle Pass along with technical improvements like a new 60 fps option on consoles. The Battle Pass gives players new content and also enables the developer to monetize the free-to-play title.

PUBG debuted on PC last March in Early Access and released on Xbox One on December 12. Since its console launch, it’s been working its way up the top 10 list — according to the industry-tracking firm The NPD Group, it was the No. 4 best-selling game and the No. 5 best-selling Xbox One title in January. Like Epic, PUBG Corp. has been rolling out new content for players, including new loot boxes. It’s also working on a new matchmaking system and cracking down on cheaters.

Ever since PUBG’s astounding Early Access success, clones have popped up in its wake in places like the Apple App Store and Android marketplaces. Of all the games that are testing the battle royale waters, Fortnite is its only serious competitor.