SuperSuit wants to modernize the old game of laser tag with a wearable harness that you can use to play shooting games outdoors. The startup is launching an Indiegogo crowdfunding campaign today to raise money for its launch.

The game is another way to get kids away from their screens and off the couches to engage in physical play outside. Like the popular Pokémon Go mobile game, SuperSuit’s purpose is to get kids and adults interacting socially and exercising while they’re having fun, said Rajat Dhariwal in an exclusive interview with GamesBeat. The suit comes with a mobile app that tracks stats and records your physical activity.

San Jose, Calif.-based SuperSuit has 15 different games with a one-size-fits-all suit for kids and adults. I played it in a demo against the founding team, and we got a bunch of queries from passersby about what we were doing. Outdoors, I could hide behind barriers and parked cars while blasting the other players. In the basic laser tag game, you aim with your glove at other players and pull a trigger. The goal is to blast them as many times as possible in three minutes.

“All of the digital games like augmented reality or virtual reality are centered around a screen,” Dhariwal said. “For kids, screens are so powerful that it makes interaction passive. Screen addiction is one of the biggest concerns for parents today. We thought outdoors is an important part of kids’ lives, and technology just skipped that part of play.”

The SuperSuit is a wearable device that you strap across your chest. The vest has a target in the front and back. The shoulder pads have team information, and the glove is used for zapping other players.

SuperSuit hopes to raise $110,000 over the next month in its crowdfunding campaign. The Indiegogo campaign will run until November 2. Backers will have the opportunity to pledge for a bundle of two SuperSuits starting at $299, available in black and white. The company plans to ship the first units to backers in April 2017. You can preorder it now via the Indiegogo campaign. 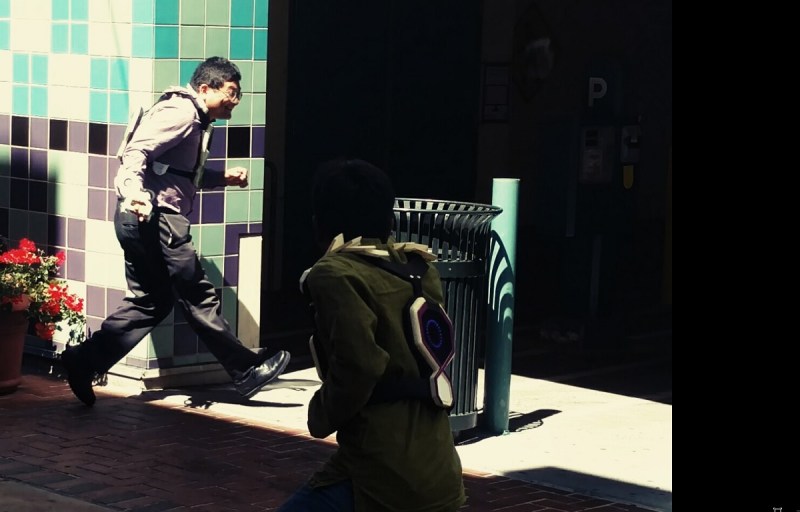 Above: Dean Takahashi plays a round of SuperSuit.

The company, formerly known as MadRat, showed off the SuperSuit for the first time at the Consumer Electronics Show in January. It got a good reception and inspired the team to keep trying to move gaming outdoors.

The technology’s games include well­-known formats such as laser tag or capture the flag, along with ones unique to SuperSuit, such as Robinhood, which uses the glove’s dual triggers to steal resources from the rich team to give to the poor team. SuperSuit has plans to launch a software development kit (SDK) in the future to enable developers to create additional games for the platform.

I played a round of Robinhood, but I didn’t quite grasp what was going on during the action. We had to pause quite a bit to figure out what was happening as the Robinhood player stole from one team and gave to another. The glove makes a laser-zapping sound when you pull the trigger. I was cracking up for most of the time I was playing.

The suit will be compatible with bots, drones, and cars on the market for a variety of connected ways to play. It also comes with a bundle of three components: SuperVest, SuperGlove, and SuperBot. SuperVest is adjustable to fit any kid or adult player and is equipped with lights and sound. With embedded haptic technology, players can instantly feel when they have been zapped.

SuperGlove has traditional triggers to zap opponents and has gesture controls to activate special superpowers as the games progress, such as a shield that protects you when you are low in energy. Or you can unleash a wave of energy that powers down all of the suits around you in a certain radius.

SuperBot is a removable unit in the vest that can act as an ally to zap opponents or as the object of a game (such as capture the flag). The SuperBot can be placed in a spot where it can ambush players who run by and then zap them.

The free SuperSuit app tracks fitness levels and location and enables players to download additional games and share scores. Suits can last up to four hours of active play per battery charge through a standard micro USB charger included in the packaging.

SuperSuits can communicate with one another up to a 100-foot radius, but you can only shoot someone at a more limited range. The SuperSuit uses proprietary technology to make it an independent gaming console that doesn’t depend on Wi­-Fi or Bluetooth to work.

Dhariwal said SuperSuit created a proprietary radio protocol called Zi­Fi, which creates a standalone wireless mesh network that enables suits to communicate with one another without being tethered to a phone or computer. It is as safe to use as Wi­Fi in terms of radiation. With no “master” suit, players can move in and out of the field of play without shutting the game down.

“You don’t need a phone around to play it,” Dhariwal said. “You could take it out to the desert, and the suits would function.”

Players can come in and out of range, and the network picks them up again.

The suit’s glove recognizes gestures in a 3D space so that you can trigger actions in the game, such as controlling your SuperBot. The more you play, the more powerful you become.

SuperSuit has 18 employees, and it has raised a private round of funding in the past. Dhariwal studied game design at Carnegie Mellon University. 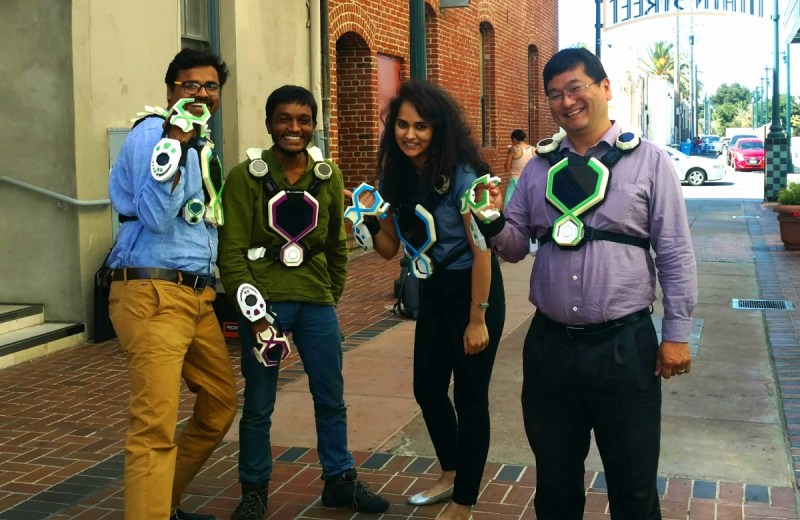 Above: The SuperSuit team with Dean Takahashi of GamesBeat.