Sword Legacy is a joint effort of developer Firecast, which debuted in 2014, and Fableware Narrative, which develops and writes multimedia content. Set in the “candlepunk” world of Broken Britannia, it draws from Arthurian stories and has a gritty, stylized aesthetic that you could almost describe as medieval noir. It combines turn-based strategy gameplay as well as point-and-click exploration, and players can switch between the characters in their party to use different skills. One character, for instance, can pick locks, while another is a potions-wielding sorcerer.

Founded in 1990, Team17 is perhaps best known for developing the Worms series. However, it’s also published a number of indie hits, such as Overcooked (Ghost Town Games), a multiplayer co-op cooking game. Overcooked has been hugely popular and received a nomination Best Game and Best Gameplay at Brazil’s Independent Games Festival (BIG), the largest indie games conference in Latin America. Sword Legacy has also been nominated for a BIG Festival Award for Best Brazilian Game.

“We’ve been signing products all over the world. Our games label is probably three years old, but we’ve stepped it up,” said Team17 CEO Debbie Bestwick in an interview with GamesBeat. “We’ve been specifically looking at certain markets. For us, Brazil has been one of the prominent emerging markets for us on a number of platforms.”

One of Team17’s advantages is the infrastructure in place to support processes such as localization. Its approach, according to Bestwick, has always been to focus on the international market. “Games like Worms have always been multilingual. I think at one point we had one version of Worms in 21 languages,” she said. “We have a great internal setup that helps these guys. We’ve been doing that a long, long time.”

Latin America is an enormous emerging market, particularly when it comes to mobile games. Market analyst Newzoo says that worldwide mobile gaming revenue is set to reach $65 billion in 2020, and Latin American smartphone users will be contributing to that, as they will soon outnumber those in North America. Brazil is the biggest market in Latin America, and last year, players there had the highest engagement on mobile worldwide, according to the mobile marketing company Cheetah Ad Platform. Most of that engagement was directed toward games.

Brazilians aren’t just playing on mobile, of course. Newzoo’s analysis found that in 2016, the Latin American market as a whole had a fairly even revenue split between PC, mobile, and console games, with all three undergoing year-on-year growth. And according to VB Insight analyst Stewart Rogers, Brazilian gamers are extremely active on Steam, the digital games marketplace that offers PC and console titles. Last year, Brazilian gamers downloaded six times the number of games every week on Steam as compared to gamers in Argentina, the third largest market in Latin America. 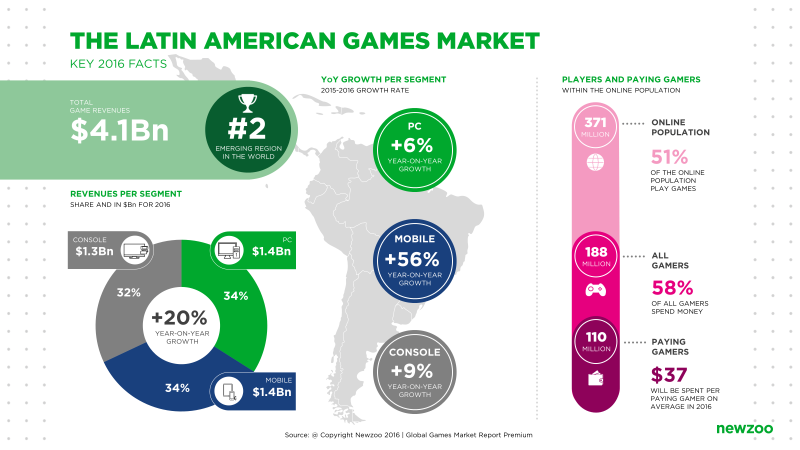 “For us, Brazil has been one of the prominent emerging markets for us on a number of platforms. I know that’s not news, with that being the largest territory in Latin America,” said Bestwick. “But why it’s interesting for Team17—it’s actually in our top five regions on Steam. We saw 77 percent growth year on year.”

Bestwick says that Team17 has a genre-agnostic approach to the kind of games it’s looking to sign. It’s published games like the nostalgic platformer Yooka-Laylee (Playtonic Games) and prison break simulators The Escapists and The Escapists 2 (Chris Davis), and it will be publishing the upcoming sci-fi city builder Aven Colony (Mothership Entertainment).

“When we started our games label, right at the start—obviously, some people would say to me that games are very different in different genres, but there’s something that connects them. I say, often, that it’s possibly fun. We like games that are fun. It’s really important,” said Bestwick. “We don’t think about genre. We don’t think about any of that other stuff that comes around. We’re looking for great games and great teams that we want to work with and help, that we know we can work with.”

Sword Legacy will be launching on PC later this year, and Team17 is actively on the lookout for other Brazilian developers to partner with.

“There’s a reason why we’re making a lot of noise around this announcement,” Bestwick said. “We do want to open up and make people aware — specifically indie developers in that region – that we’re looking for product from that region. We want to help them.”