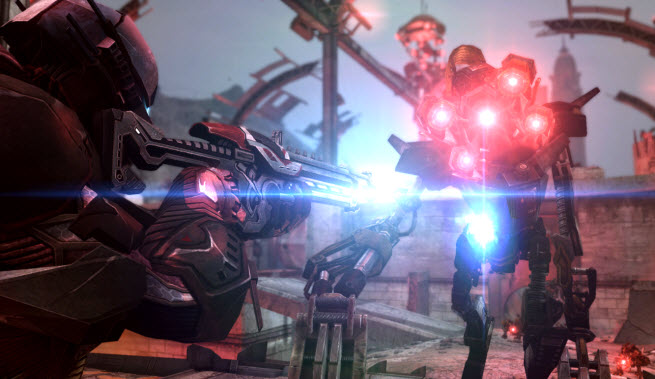 I’ve seen the pilot episode of Defiance, and I’ve previewed the massively multiplayer online third-person shooter game. Both are launching this month as part of a huge collaboration between NBC Universal’s SyFy network and venture-backed game company Trion Worlds. And I’ll be honest. The content is good, but I still don’t know how this one is going to turn out. These two properties will share a common fate. They’re both going to succeed, or they’re both going to fail. 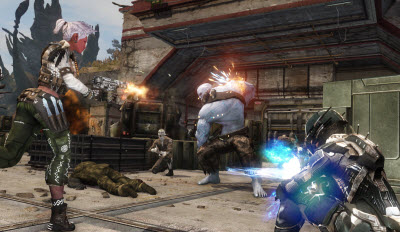 The magnitude of the gamble is unlike any other “transmedia” project involving both TV and game versions of the same entertainment property. The Wall Street Journal reported that the development costs alone on the video game are $70 million. That’s not hard to believe, considering Trion has raised more than $150 million and it has a team of 150 working on the game. Over five years, it’s easy to see how payroll costs alone could hit that number. Another 150 worked on the TV show at SyFy, and they all had to coordinate.

The story is set on Earth in the year 2046. It takes place after a massive alien ship, the Ark, crash lands on Earth. The aliens are seeking a refuge as they flee their own planet, but they make a mess of Earth. The ship terraforms the whole place, and it dumps seven unwanted alien races to live or fight among the surviving humans. The aliens brought with them a new resource, Gulanite, that everyone wants to control in a kind of gold rush. The game’s version of San Francisco is in  a state of warfare. In Defiance, the races are living together in an uneasy truce.

The game launches on April 2 with a huge amount of publicity from NBC Universal and its owner Comcast. Players will become immersed in the game and, hopefully, become attached to the lead characters Joshua Nolan and Erisa during a two week mission. They will start in the Marin County headlands and work their way down to the Golden Gate Bridge, where the player will feel a “Planet of the Apes” moment at seeing the ruined state of the iconic bridge, said Nick Beliaeff, senior vice president of development at Trion Worlds, in an interview with GamesBeat. The game is one of the only ones that works across the PC, PlayStation 3, and Xbox 360 platforms. 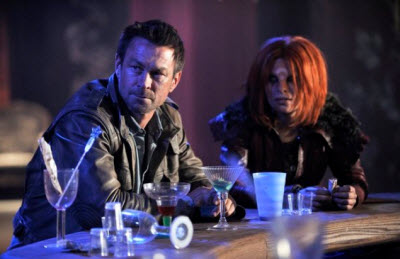 “We’re so excited this labor of love is about to see the light of day,” he said.

After two weeks in the game, Nolan and Irisa will leave San Francisco and drive to the St. Louis arch, which is also in a ruined state after an alien spaceship crash lands on Earth. In the town of Defiance, where the TV show takes place, the aliens and humans are trying to live together. The movement of the characters from the game to the TV show is what transmedia theorists call a “touch point.” It’s a place where the fans of one medium could cross over and become fans of the same story in another medium. It is the hook to draw us into Nolan and Erisa (pictured right, Nolan played by Grant Bowler; Irisa played by Stephanie Leonidas). The touch point can work in either direction. It can pull the TV fans into the game or vice versa. If it happens right, like with the Harry Potter films and games, it’s a gold mine.

“We’re not binary when it comes to entertainment,” Beliaeff said at a recent event in Las Vegas. “We have touch-points. We don’t care how you get into Defiance, through the TV show or the game. We just want you in Defiance.”

The TV pilot is finished and set for its debut on April 15. Altogether, the first season will have 13 episodes. Some are done and some aren’t, said Michael Nankin, directing producer at SyFy, in an interview with GamesBeat.

You can play the game without ever watching the show and vice versa, but as TV series goes on, some characters will leave the show and transition into the game. Global issues affect both worlds, as the show is set in St. Louis and the game is based in the San Francisco area. The sci-fi show has the flavor of a western, but Nankin describes it more as an immigrant drama. The pilot has some slow parts, but it drew me in. The acting was good, the story had tension, combat, and comic relief. The show also set in motion a number of mysteries that will unfold in future episodes. I liked the episode, but I can’t say it’s going to hold my attention for a whole season in competition with so much other entertainment. It has a large cast and is tightly woven for a two-hour episode. 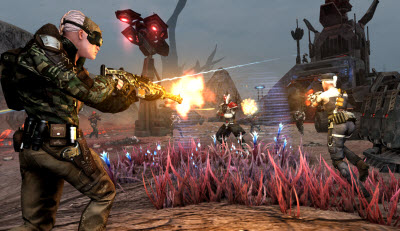 So how is the game?

But the game, by definition, is non-linear, with hundreds of hours of content and enormous territories for the players to roam over. You can run around on foot, but more likely you’ll want to ride an all-terrain vehicle. I’ve played the game several times, watching it move from an unpolished state to nearly finished. Last week, I played the version that players will see.

In the third-person shooting game, you can take on a wide variety of roles, including medic and machinist. I walked into a battle as a machinist with a sniper rifle and a machine gun. The graphics in the PC version look a lot sharper than on the consoles. But titles like Crysis 3 definitely look better.

I happened to materialize in the middle of a bridge. I tried to ride over it, but faced a roadblock by a bunch of mutants. I retreated and used my sniper rifle against them. They were not particularly hard to kill as they stood out in the open. But they did have a nasty habit of scooting to the side whenever I had them in my gun sights. The artificial intelligence was limited but passable. While one set of mutants fired at me, another would occasionally rush me with the mission of slicing me in two.