If your young kids happen to be Microsoft Windows 8 fans, they’re going to be happy about this. Israel’s TabTale is launching its popular children’s apps on Windows 8.

It’s a small victory for Microsoft, but the kind that the company needs to be viewed as credible in the fight against its competitors Google and Apple. 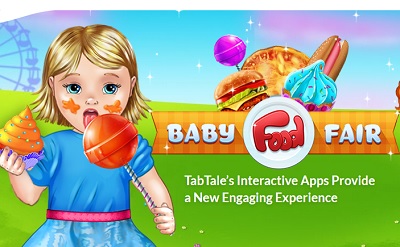 Sagi Schliesser, the chief executive of Tel Aviv-based TabTale, said in an exclusive with GamesBeat that the company will announce at Microsoft’s Build developer conference in San Francisco today that it will support the Windows 8 platform for PCs, tablets, and smartphones. That’s a nice coup for Microsoft’s third-place platform because TabTale’s children’s apps have been downloaded more than 333 million times across the Web, iOS, and Android.

TabTale makes apps such as games, educational apps, and interactive books. It has 250 titles on the market. TabTale’s first app for Windows 8 and Windows Phone 8 will be Paint Sparkles, which has been downloaded more than 10 million times. More releases are coming in the next few months.

“We see that Microsoft is doing good numbers with its platforms,” Schliesser said. “We see the number of downloads is growing. It’s good enough to be optimistic and invest in the platform. You never know where the ecosystem will be in two or three years, and it is good business for us to be there.”

By publishing on Windows 8, TabTale can make its apps available on a variety of devices, such as PCs, tablets, smartphones, and hybrid laptop-tablets known as 2-in-1s. TabTale said that with 25 million monthly active users, it is the eight-largest mobile app publisher in the world. Its top franchises include Baby, Paint Sparkles, and Doctor X.

“Windows is backed by a rich app ecosystem that is offering a variety of quality apps and games,” said Todd Brix, the general manager of Windows Apps and Store at Microsoft. “With popular interactive game developer TabTale investing in the platform, it is evident that there is no better time for game developers and gamers alike to choose Windows.”

TabTale was founded in 2013 and has 130 employees across a number of offices. One of those offices is in the Ukraine, which has been rocked by turmoil in its political dispute with Russia. Schliesser said that the Ukraine studio has seen some disruption, but he said that the studio’s employees are hard at work churning out apps every couple of weeks and are functioning remarkably well under the circumstances.