Supermodel Kate Upton’s Super Bowl commercial made Machine Zone’s Game of War: Fire Age into one of the best-known mobile games. And now Israel’s Plarium is using the same playbook by making actress Megan Fox into a main character for its mobile social game Stormfall: Rise of Balur.

Plarium was founded in 2009 and it made a big splash on Facebook with titles such as Stormfall: Age of War, launched in 2012. It now has more than 250 million registered users across the web and mobile, and Stormfall: Rise of Balur has more than 7.5 million registered users. Fox, who has starred in films such as Teenage Mutant Ninja Turtles and Transformers, will lend her star power to portraying the character Amelia Delthanis, captain of the High Council Guard in the game. She’ll be a mentor to the player in the game, and may star in live-action commercials as well.

The fantasy role-playing game Stormfall: Rise of Balur was released in January 2015 as a sequel to Stormfall: Age of War. Fox’s strong-willed character is the first in a series of updates coming to Stormfall over the next few months. It will include a fully-voiced single-player campaign.

Rise of Balur is host to more than 1.8 million raids a day and 5.5 million hours of gameplay a month.

“We are thrilled to have Megan become the new face for the Stormfall franchise, one of our most beloved games since Stormfall: Age of War came out on social networks in 2011”, says Gabi Shalel, vice president of marketing at Plarium. “Megan’s experience in other blockbuster franchises and action films means that she will be a great addition to our game.”

The title is available on iOS and Android. We talked with Fox and asked her if she could one-up Kate Upton. Here’s an edited transcript of our interview. 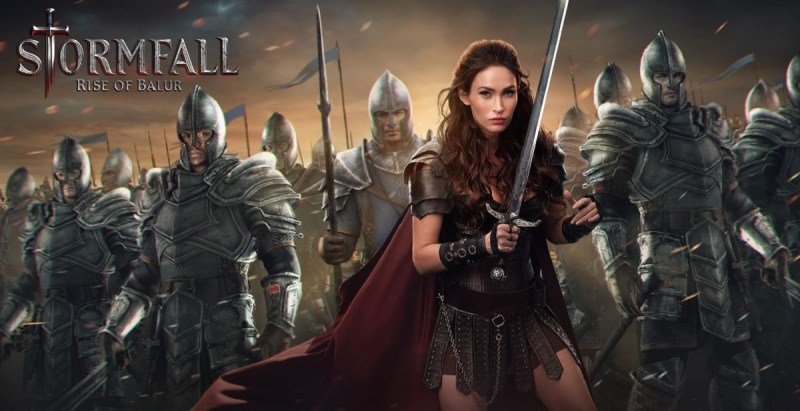 GamesBeat: I’m reminded of Kate Upton and Game of War a bit.

Megan Fox: A little bit, yeah. I can’t make a full comparison, but objectively it does seem a little bit like that.

GamesBeat: How did you become aware of Stormfall and this opportunity?

Fox: I have a couple of nephews that play it and know about it. They’re 14 and 12 now, I think. When the offer came in, my youngest nephew was sending me game reviews and letting me know what people thought about the game, what kind of game it is exactly, how it plays and whatever. They introduced me to it. They loved it and it’s gotten such good reviews — it’s a really popular game — so it seemed like a good thing to do.

GamesBeat: How would you describe and portray this character, Amelia?

Fox: She’s kind of a mentor to the actual player. She leads you through the game and advises you. But her personality is sort of — she’s this really strong, badass woman character in a very patriarchal, male-dominated world. Rebellious. She has a pretty dark, wicked sense of humor.

GamesBeat: Are you doing any live action for it?

Fox: For the commercial I did, but in the game I’m not. I thought I was going to be doing full mocap, but it turned out that wasn’t necessary. 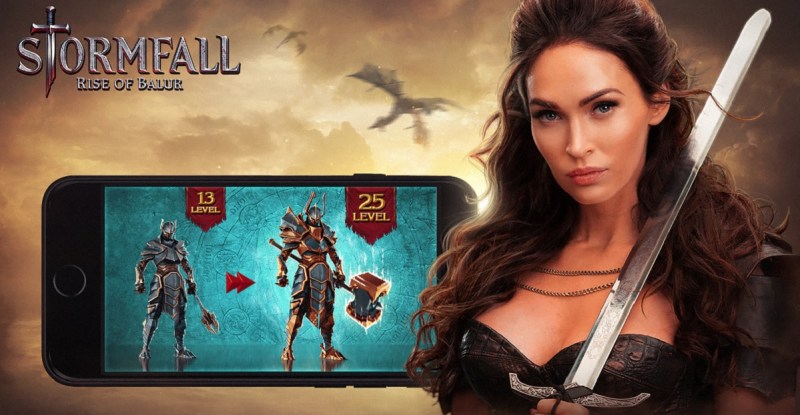 Above: Megan Fox believes that mobile gaming is hot.

GamesBeat: For the commercial, is it a series of spots or just one right now?

Fox: It plays out as a series. There’s a couple of more humorous commercials, and then there’s one that’s more of an epic type of scene. I know that there’s three spots.

GamesBeat: You’re very successful in your own medium. What’s interesting to you about this kind of partnership, doing something in a game?

Fox: I used to play video games a lot before I had kids. I was really into Halo and some other games. I grew up on a Super Nintendo. So I’ve been gaming my whole life. I’ve always been open to this. But I’ve never actually had an offer to be in a game. This is the first time. I probably would have always said yes, but this is my first opportunity.

GamesBeat: It’s a big industry now. It can come back and help you.

Fox: Especially games you can play on your phone are blowing up. That industry is going insane. It’s a successful spot to be in.

GamesBeat: Maybe one day it’ll be something you can be known for more than movies.

Fox: [laughs] I don’t know if that’s my goal. I wouldn’t be opposed to it if that were to happen. It’d be okay too.

GamesBeat: In the role, are you actually fighting? What particular things might you be doing, either in the ads or in the game?

Fox: She carries both a sword and a bow. She’s supposed to be pretty proficient with both of those, which I personally am not, of course. I never learned how to sword fight or shoot a bow. But there’s not a lot of fighting in the game spot. Just some very minor sword work. We did some shooting with the bow and stuff, but I don’t know what will make it in. I haven’t seen the whole spot yet.

GamesBeat: My recommendation is you do a commercial with Kate Upton and stage a fight. 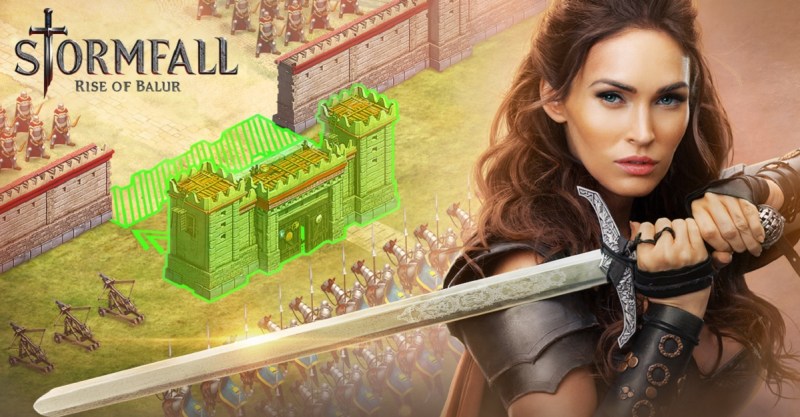 Above: Megan Fox wields a sword in Stormfall: Rise of Balur.