With the amount of hours I’ve logged into Hearthstone, The Elder Scrolls: Legends, and Solforge, you’d think I would have been a long-time collectible card game player. Someone with shelves full of Magic: The Gathering cards.

When Hearthstone went into its closed beta test in 2013, I hadn’t touched a CCG since, oh, the mid-1990s. But it wasn’t Wizards of the Coast’s Magic: The Gathering, the game that launched genre. I never played it. I played the now-defunct TSR’s Spellfire, which was Dungeons & Dragons‘ attempt to answer Magic.

I’ve been playing Magic: The Gathering — Arena during its closed beta, and over the last three months, it’s clicked with me. I’m winning games. I’m crafting cards. I’ve gained enough confidence to create my own decks — and win with them. I’ve even ranked up a bit. And this surprises the heck out of me. One of the reasons I never got into Magic was that I was afraid its dominance would kill TSR and my beloved D&D. Little did I know (then) that Wizards of the Coast would save that role-playing game.

And as the years went by, Magic just never grabbed me. I had many other games to play. I had lots of sports to watch. I’ve had a marriage and family to build. I’ve even gotten into the tabletop hobby, buying dozens of ships for the X-Wing: Miniatures and Star Wars: Armada games and turning my closet into my gaming hoard.

And yet, it turns out Magic still had a place for me. Here’s what this Magic: The Gathering virgin has learned after a couple of months of playing Arena on his PC. 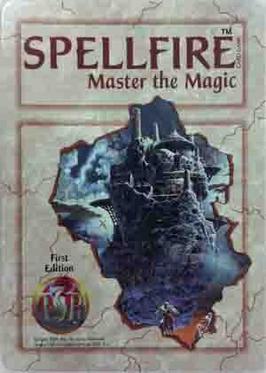 Above: I loved this silly game.

Image Credit: TSR/Wizards of the Coast

Dungeons & Dragons has long been my tabletop jam. Then Magic: The Gathering hit the scene in 1993 and flipped over the tables. It was a smash hit, so much so that role-playing gamers like me feared for D&D‘s future. TSR, D&D‘s original owner, wasn’t in strong shape, and it seemed like every comic and game shop that sold D&D gear was devoting more space — on the shelves and on tables — to Magic.

So TSR came up with its own take on Magic: The Gathering, releasing Spellfire in 1994. It was the second CCG on the market, and while I enjoyed it and had a lot of fun with it, it wasn’t as good as Magic. Nor did it sell.

Spellfire was dead. But in its wake came a number of great cards games, such as Pokémon, Yu-Gi-Oh, and the late Star Wars: Customizable Card Game. While I dabbled with Star Wars in 1995 and 1996, once Spellfire died, so did my collectible card-playing hobby.

With a little help of my friends 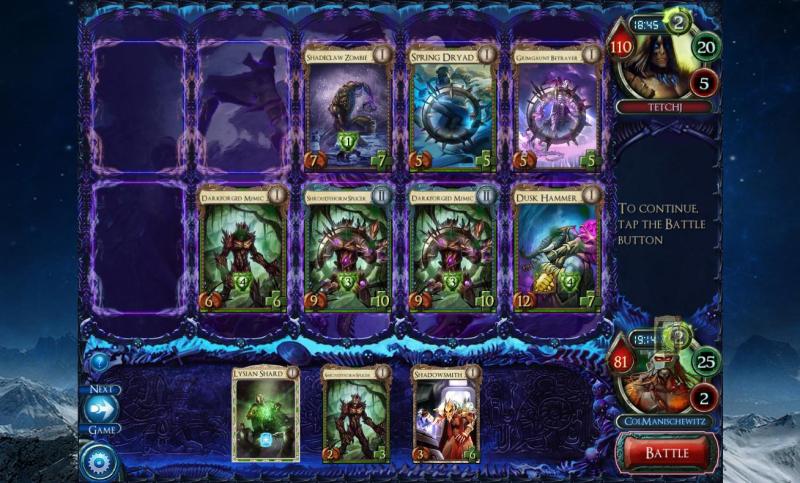 Above: Solforge — one of my first digital card game habits.

For years, I had little interest in Magic. When I got the Hearthstone and Solforge bug in 2013-’14, I didn’t go down to my local game store and check out card packs. When I later added The Elder Scrolls: Legends to my rotation when Solforge died, I still didn’t turn to paper card games, even though it’s clear that at this point, I enjoyed them.

In 2016, my kid discovered Pokémon. I had a built-in hatred of this franchise thanks to a former coworker (as I detailed here in 2013). As my oldest son learned about the monsters from books and TV shows and started collecting cards, I decided it was time to get him into the card game. We taught each other how to play last year, and he digs building decks. He just beat me in a match with a new deck he brewed last week.

But beginning last year, a friend of mine began pestering me to get into Magic: The Gathering. He knew I loved Hearthstone, so he figured I’d be into Magic. He’s Shivam Bhatt, who with his friend Phil DeLuca runs Commanderin’, a popular podcast on one of Magic’s fun formats. He’s a big voice in the Magic community. And thanks to him, I finally shuffled some cards around. We played with a couple of beginner decks he had built, but the world conspired against us — I had to leave to go home to my kids, and we couldn’t finish.

But we tried again earlier this year with a pair of starter decks Wizards of the Coast had sent me to help teach me about Magic for its new online game, Arena. I knew Shivam enjoyed Thoptors (these are basic flying token units), so I gave him the deck with those. I played a deck with Vraska the Gorgon, one of the Magic’s Planeswalkers.

I don’t remember who won, but I do remember him talking me through the plays I was making and sharing info about the cards. 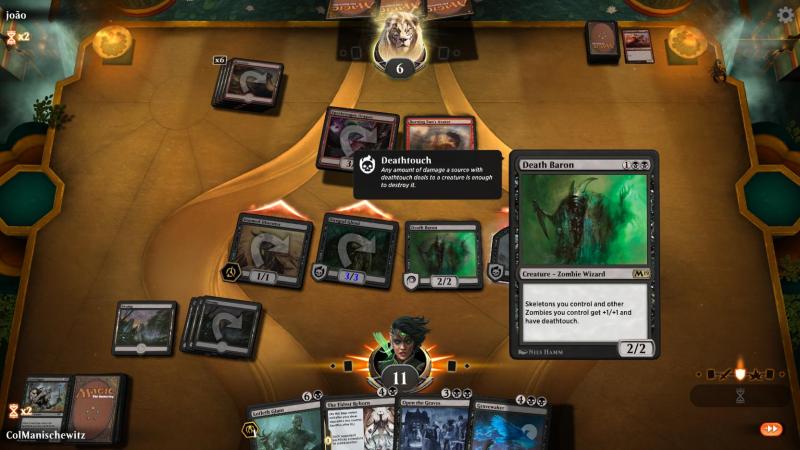 Above: Zombies remain one of my favorite decks because of Death Baron turning shuffling corpses into lethal weapons.

When I got into Arena for the first time, one of the starter decks I got was “Graveyard Bash,” which was a Black deck (Magic has five colors, and Black deals in the undead, monstrosities, killing spells, and other dark deeds). I started playing with it, and I fell in love with the Graveyard mechanic. With this, you bring back minions that have died from the discard pile (aka the graveyard).

As I won matches, got comfortable, and earned cards (including wildcards that I could use to craft those I didn’t own), I embraced the Black Undead-Graveyard tactic. I created two more Death Barons, which are zombie wizards that give all your zombies in the field Deathtouch, making them lethal to any of your foes’ creatures. Gruesome Menagerie looked fun. It brings back three creatures — one that costs 1 mana, 2 mana, and 3 mana — from your graveyard to the field. I crafted it, too. And I went out for some more punishment.

I played a couple of dozen matches like this, adding in more cards to my Zombie-Skeleton deck as I acquired them (such as Gravewaker, a ghost bird that brings back creatures from your Graveyard), before I encountered the match that helped me fall in love with Magic.

The queue threw me at a player running a White deck. This one had Angels, Cat people, and Vampires, and Lifelink was its common theme — every time a creature with this capability hits you or one of your units, the damage it does restores the same amount of life for its controller. Neat, huh? It’s so neat that this bloke had me on the ropes, down to 4 health to their … 74 health.

This is when Death Baron becomes my favorite card. Between bringing back creatures from my graveyard and giving them lethal, I whittle down my opponent’s board and empty their hand. I use spells such as Murder (it, well, kills a target) to take out flying creatures my Gravewakers can’t handle. At one point, I had 12 Zombies on the board, and I come back for the victory.

Walking the path to Janktown 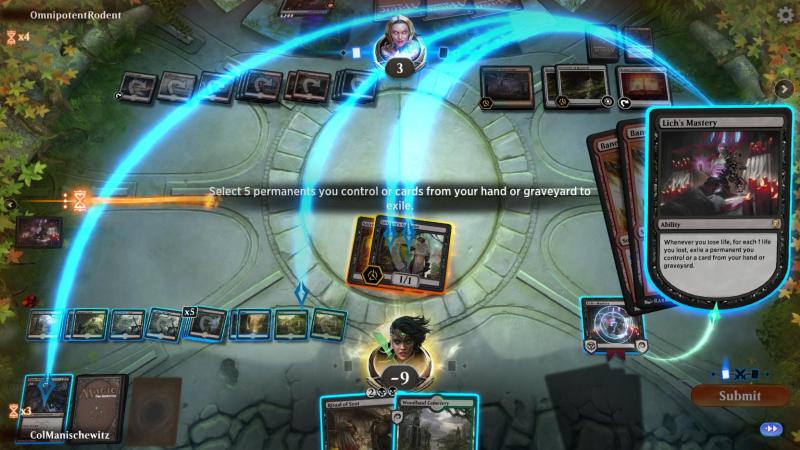 Above: Welcome to Jank Town.

In early October, I started opening a lot of Magic: The Gathering packs. Wizards of the Coast had set me some from a variety of sets to help learn Magic to cover their new digital card game, and as I opened packs, I started to set aside cards that looked like they’d be fun to craft decks around — decks that just aren’t that good but for me are a hoot to play (the Magic community calls this jank). The first of these was Tharn’s Temporal Gateway, which is a mana-cheating card. Once played, you can use it to put a historic card (this means one that’s a Legendary, a Planeswalker, or an Artifact) on the board for just 4 mana. Many such cards cost more than 4 mana, so I saw it as a way to get my powerful cards out early — and without color restraints.

Then I saw it in action when someone played it against me on October 18. I sent a note to my friend, Shivam, about it and said that I was going to craft it as soon as I got a wildcard for its rarity. He responded, “Dude, you are walking the path to Janktown.”

And I haven’t left. Almost every deck I’ve created or played since October has been either a jank or off the meta. I’ve been tinkering with:

I’m finding the level of experimentation here, between the different colors and formats, to be stimulating. I’m taking single cards, either from the stack I opened or those I get as rewards in Arena, and cobbling together decks that I find to be amusing, challenging, or fun — or all three in one.

Above: I have another 22 decks that don’t fit into this screenshot. I make a new deck or two a week — sometimes more.

Now that I’m hooked on Magic, I’m wondering what I should do next. Last week, I played in a draft with cards from the Conspiracy set (along with some other hodgepodge of packs). I’ve save my gold and gems for the Ravinca Allegiance, which debuted in Arena  on Thursday (and comes to the paper version of Magic on January 25). I’m thinking about going to my local game store for a prerelease.

The main question that faces me: Should I attempt to rank up, or should I continue walking the path to Janktown? Arena gives you ranks for Constructed and draft. I’ve never cared about my rank in Hearthstone or Legends — I’d rather have fun with my homebrew jank than try to climb the ladder. So that’s out. The idea of getting good at the draft modes intrigues me, but it’s so expensive (yes, you do get the cards you open/draft). I’d love a way to draft without keeping the cards, a practice or pauper mode — something that doesn’t drain my gold and gems.

Whatever path I choose, I do know that I’m going to play more Magic outside of Arena. I’m also going to continue walking the path to Janktown, seeing what clever combos or weird synergies I can tinker with.

Won’t you come to Janktown with me?

Disclosure: Wizards of the Coast sent me Magic: The Gathering cards and Arena gems to help me learn the game. I have since spent money on gems. My coverage remains objective.