It’s been a long, strange year for Tales from the Borderlands, developer Telltale Games’ episodic adventure title set in Gearbox Studios’ cel-shaded gun-porn universe. With the final episode, out now for PlayStation 4, PlayStation 3, PC, and Mac (reviewed version) and coming later this week to Xbox One, Xbox 360, iOS, and Android, it’s finally time to see how all of this ends.

But even beyond that, Episode 5: The Vault of the Traveller is about seeing how the rest of the series works, and it will consistently surprise you with the ripples your decisions have made since the beginning.

If you haven’t touched this series yet, you owe it to yourself to schedule a full-run playthrough in the near future. 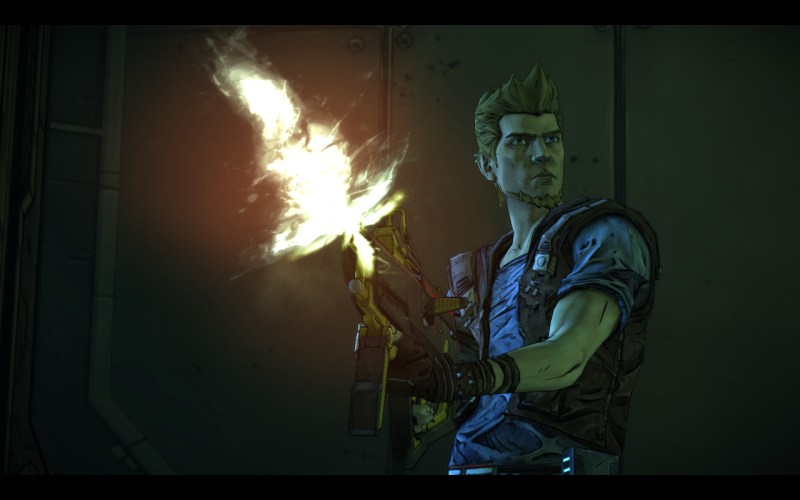 Above: August (Nolan North) is so crazy-violent that he doesn’t even care if he knows what he’s shooting.

The action sequences are crazy (and crazy fun)

After the more stealth-centric and dialogue-heavy space heist in Episode 4, “The Vault of the Traveller” remembers that this is a Borderlands game and makes sure everyone gets a gun and someone to fire it at. This entry sprints between explosions and set pieces like the cast of a J.J. Abrams Star Trek movie.

And it’s all great.

You’ll have shootouts, chases, and epic fights that I won’t spoil because that’s most of the fun. One encounter near the end has you dialing Street Fighter-esque combos into your keyboard or controller to unleash the pain, and the more buttons Tales throws onscreen for each quicktime event, the more you feel like you’re actually engaged in a high-stakes fight to the death. It’s satisfying, and it manages to elevate timed button presses to something more than just “what you have to do to make the next thing happen.” 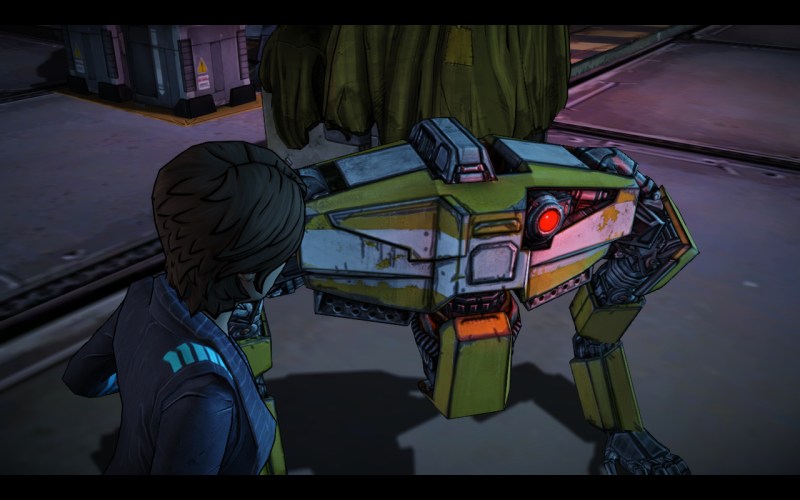 Above: Your decisions have affected things since the beginning. And we’re not just talking about the number of limbs Loaderbot has.

One of the best scenes in Season 1 of Telltale’s earlier series, The Walking Dead, had an antagonist confronting the main character (and, therefore, the player) with every choice they had made along the way. It was meant to put everything into perspective and maybe even make you question whether or not you’d made the right decisions along the way.

“The Vault of the Traveller” manages to outdo that scene by having all of the relationships players have cultivated throughout the series actually affect a decision later on. And depending on how that sequence goes, the ending can unfold drastically differently. The actual plot doesn’t seem to change; it’s just really effective seasoning, but developers of choice-driven games don’t often take the time to say, “You did this then, so you can’t do this now.” And enough things affect this moment and its aftermath that you can’t help but admire how much really went into making this thing. 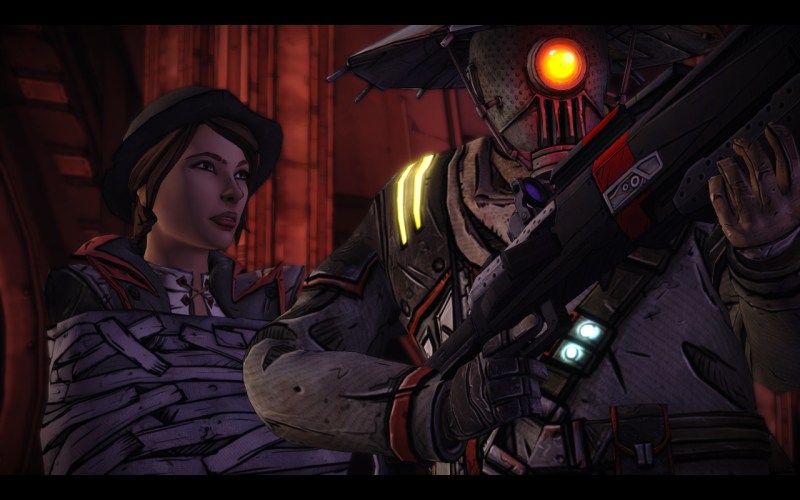 Above: Do we get to see who The Stranger is in the finale? I mean, yeah. That’s kind of important information.

You’ll want to start the whole series over. Right now.

Maybe this is a good thing, and maybe it isn’t — we all have tons of games to play, after all. It’s the freaking fall. But the effectiveness of that moment above and the different possibilities and combinations it suggests provide ample reason to try another playthrough.

And if that doesn’t do it, the chance to spend more time with these characters and the pitch-perfect writing and humor is another draw.

This is actually the first Telltale series I’ve wanted to go back and explore further. I’m not satisfied just having secured “my” playthrough that is my own special butterfly that I must not tarnish by spying the things that might have been. I want to see everything Tales from the Borderlands has to offer, and as soon as I have time to do that, I will return to Pandora.

Because, again. Fall. We have a bunch of stuff to play.

I’m under no illusion that choice-driven games must and do respond to my every decision and whim. That would create a design flowchart that I would never want to make. But at some points in Episode 5, my inability to choose and the invisible hand of the developers forcing me to follow a specific path and no other felt very real.

Again, I don’t want to spoil anything, but during one important scene, I had to press a button. This was the button to make the next thing happen, and it was the only way to move on. I spent a few minutes studying my screen trying to see if a way around the problem existed, but of course, none did, because this was What Was Supposed To Happen.

And as if this obvious bottleneck weren’t frustrating enough, I had another character yelling at me to press the button. She was not addressing another character; she was yelling at me, Evan Killham, sitting at my keyboard. It took me right out of the game, and while the story solidly justifies that trap, it was no fun to play.

I wasn’t sure anything could surpass The Wolf Among Us as Telltale’s most engaging series, but Tales from the Borderlands has outdone it with its sharp writing, exciting gameplay, and gallons of personality. And blood. And bullets, if we can measure those in gallons.

Tales from the Borderlands, Episode 5: The Vault of the Traveller is out now for PlayStation 4, PlayStation 3, PC, and Mac. It’s out October 21 for Xbox One and Xbox 360, and it will launch on iOS and Android on October 22. The developer provided GamesBeat with a free Mac download code for this review.