GamesBeat: Are most of the people in the company still in Slovenia, or in other offices like London?

Vavpotič: The biggest one is still Slovenia, but we have offices around the world. We’re headquartered in Cyprus. Management is in Cyprus, but Slovenia has most of the people. In London we have a sales team, and we also have some people in China. The owner created a new company and is employing a lot of people in Hangzhou and Guangzhou. China is becoming a huge area for us.

GamesBeat: Do you come to the United States often?

Vavpotič: Anyone in the mobile game business should come to the U.S. at least once a year. I’d say I visit one or two times a year. This has been a change. In the past, the company was very closed. We didn’t speak to a lot of journalists. We weren’t present at conferences. But that’s changed. We’re trying to bring our story to a new audience, to tell our story to other developers. It’s a motivational story, a story of success all around the world.

GamesBeat: With Angry Birds, a lot of people very publicly covered it. They tried to figure out whether or when it hit its peak. I don’t know if you face that same kind of scrutiny, where people are trying to figure out if this thing can hit its limit. Do you consider that from your own point of view?

Vavpotič: We’re aware of the fact that this can happen. The numbers, how installs are growing, the monthly active users, we can see that we’re not there yet. But you know how it is. You need to create great new games and keep your users happy. I’m always telling the company that we should have two things in mind: our employees and our users. If you screw either of them, you screw the future of the company.

When you’re in the market for eight years people will obviously start asking questions. Is this still going to be there, or not? The challenge, which I’m not smart enough to answer for certain, is whether we can make Talking Tom immortal. He’ll be there forever. That’s the secret of the online/offline combination, perhaps. If you can bring the values and the importance of spending time together, spending time on mobile, we’ll be able to crack that. I think we have a pretty good chance to not have to be afraid of hitting a peak. We can just keep sharing the fun around the world. 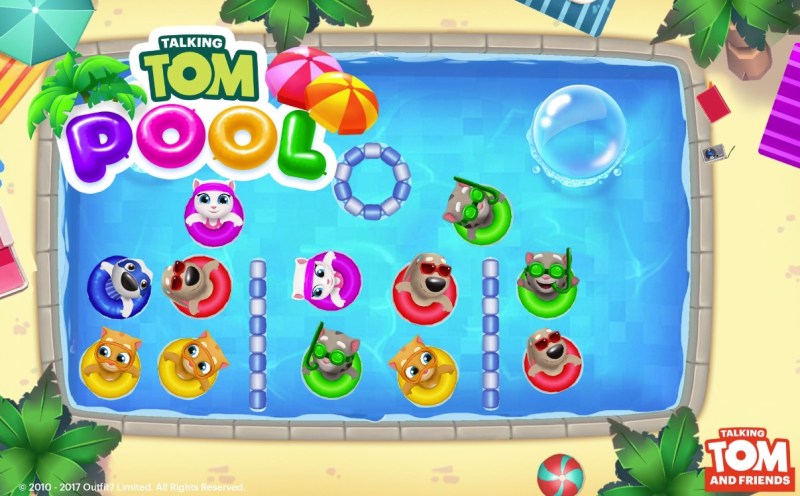 Above: Talking Tom Pool is a puzzle game.

GamesBeat: It sounds like you’re having a good time in the process.

Vavpotič: That’s always important. As I said, it’s one of our values. We’re always reminding our employees. If you talked to them personally and asked them what’s the most exciting thing in the company, they would probably say it’s the team-building. We have crazy team-building. We get everyone from all around the world together and spend two or three days together having a lot of fun. We keep focused on that at every moment. We expect people to work hard and play hard with us.

GamesBeat: How are you motivating people to stay around for so long, especially after the transition from the founders to new ownership?

Vavpotič: If people see that their vision matches the vision of the company, if their values match, if they’re happy with the benefits they get, that’s not a problem. As I said in the beginning, sharing a vision, sharing the new opportunities in front of is definitely an important step.

It helps that we have a huge user base, of course. People in analytics are passionate, because there are a lot of great things to explore there. If you’re an artist, millions of people will see your work. And at the same time, if something goes wrong, you know that a lot of people won’t be happy with it. It’s a challenge that we bring to our employees every day. Whatever they do, it will be global. They travel a lot and they see the success of Talking Tom around the world.

For me, that’s the biggest measure of success. When I check into a hotel in someplace like India and I give them my business card, because my name is so hard to pronounce, they say, “Oh, Talking Tom.” Sometimes they’ll even bring out their mobile phone and show me their level. It keeps all of us motivated, because we’re creating something that’s — I’d say it’s making a change in the world. The world is becoming more and more complex and difficult. It’s nice having that virtual friend in your pocket, something you can play with. It brings fun and joy around the world. It’s an important motivation for everyone.

For us, the most inspiring thing is always hearing stories from kids and their families. We hear from time to time, parents writing to us and saying, “We have a child with autism who didn’t want to talk, who didn’t want to communicate, and Talking Tom really helped them. He’s someone they can talk to, and Tom answers back, and it’s helped with their development.”

People will look at it and think it’s just a stupid cat that repeats after you. How does this turn into a billion-dollar business? And I always say, “There has to be something behind 350 million people playing a game. There’s some magic there, something you can’t crack so easily.” Otherwise every mobile company would make a game that 350 million people play.