When kids play with iPads, parents aren’t happy because they see the youngsters disengaging from the rest of the world. As a parent, Pramod Sharma shared that view, and he did something about it.

Today, Sharma’s startup, Tangible Play, is unveiling a new kind of gaming device called Osmo that uses the iPad but brings kids back into the real world of play. The company is launching a crowdfunding campaign on its own website to raise $50,000 so that it can get manufacturing started.

“Kids love iPads, but they get sucked into the screen,” Sharma told GamesBeat. “You don’t pay attention to what is around you. That is not healthy. Technology should remove that, and we are working on it. I have a daughter. It is close to my heart.”

The system is sophisticated yet remarkably simple. You set the iPad in a vertical stand and then attach a small mirror in front of the tablet’s camera so that the lens uses the mirror’s reflective capability to see downward. Then you can play games where the camera recognizes small objects that you put in front of the iPad. 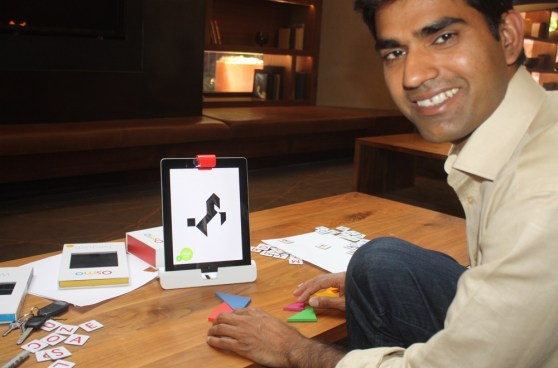 Above: Pramod Sharma of Tangible Play

All the while, a mobile app directs the kids to play collaborative games that make use of both the screen and physical objects.

One of those games is Osmo Words, a game that resembles Hangman. The iPad shows you an image of something like a bear and a word that you must guess with four letters. Two players can toss out letters in front of the iPad. The camera will recognize both incorrect letters and correct letters.

You can play Osmo Words in a competitive Versus mode, but you can also play in Together mode, where players work together. That makes the game work with both boys and girls, as well as young and old. 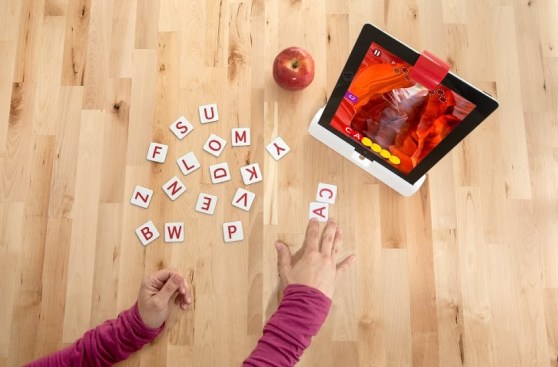 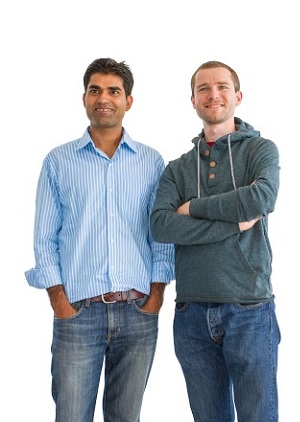 Tangible Play is starting a crowdfunding campaign to create a movement around Osmo. The system comes from young parents who previously worked at Stanford University, Google, and game companies like LucasArts.

Osmo’s other games include Tangram, where you match physical blocks to duplicate an image you see on the screen of the iPad. The iPad app uses the camera to figure out when you have placed the blocks in the correct pattern. The game is based on a timeless Chinese matching game.

Another game is Osmo’s drawing game, Newton, where you place a piece of paper in front of the iPad. On the screen, little balls drop from the top of the screen and bounce off objects. If you draw a line on the piece of paper, it becomes an obstacle inside the game. The dropping balls will bounce off of it. It’s all done in real time.

“You draw something that becomes part of the experience,” Sharma said.

Sharma, a former Google engineer who worked on projects like Google’s book scanning effort, started the company with Jerome Scholler, a game designer with experience at Ubisoft and LucasArts. They took care to carefully design the blocks, packaging, and games to make them easy to use for nongamers. The name Osmo is short for osmosis, or learning by seeing.

“I want to have Apple design and Pixar-like quality,” Sharma said.

Sharma said that the company tested Osmo with schools in Los Altos, Calif. Both children and teachers love it so far as the titles are both social and educational in addition to being fun. Osmo is aimed at children ages 6 to 12, but a grandparent could easily play the game with a youngster.

“Our games are social by default,” Sharma said.

“After seeing Osmo for the first time, I couldn’t stop bringing my colleagues to see it, and we couldn’t stop raving about Osmo. Every time students play with the Osmo, their excitement is palpable,” said Tanya Avrith, an Apple Distinguished Educator. “After testing hundreds of products for kids, we’ve finally found a product that we know every one of our students will love — a product that naturally brings kids together around the iPad and engages them to learn collaboratively. This is the future of education.” 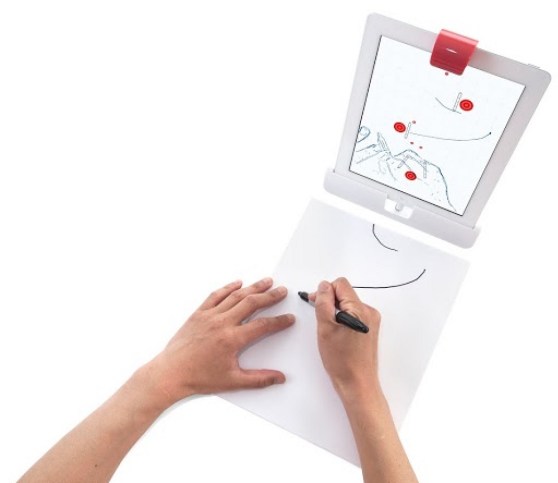 The system uses advanced technology, including proprietary reflective artificial intelligence. But Sharma wants that technology to be used to get rid of what he calls “digital zombies,” or kids who are hunched over and glued to their devices, isolated and disengaged.

On the physical side, anything from toothpicks to paintbrushes can be part of the experience. Osmo extends gameplay beyond the screen, changing the space in front of a tablet into an interactive environment that turns any object into a digitally connected game piece.

The game doesn’t need WiFi, and Osmo itself doesn’t require a battery.

Osmo’s crowdfunding campaign starts today. The device will retail for $99, but presale backers will get a discount pricing of $49, as well as $5 off for every friend you refer. Osmo is expected to start shipping in its first devices this summer.

The company has eight employees, and it has raised a small seed round so far.

“I do not think you can avoid technology in today’s world,” Sharma said. “It is good for us in many ways. But there’s a right way and a wrong way to play with it. Osmo is the right way.” 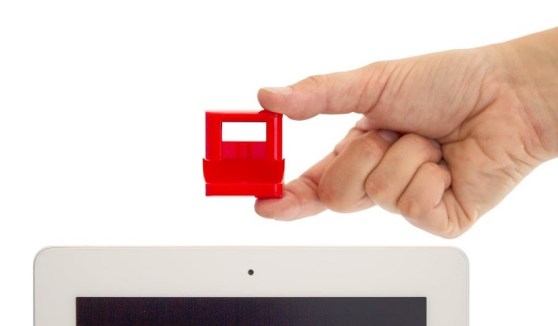