Zoomers love games. About 86% of Gen Z members use mobile devices as gaming platforms, according to a report by mobile ad and app monetization firm Tapjoy. And Gen Z is also the most likely of all generations surveyed to enjoy other gaming platforms, including PC and console, indicating that their appetite for games is generally high.

The survey of mobile consumers between the ages of 18 to 24 reveals that 68% shop on mobile one to four times a week, yet another sign that Gen Z is a “mobile-first” generation.

Tapjoy said that members of Generation Z are extremely tuned in to the mobile ecosystem. More than three quarters of Gen Z, defined as those born between 1996 and 2010, claim to have gotten their first smartphone before the age of 18, compared to only 49% of millennials (the prior generation).

Tapjoy surveyed 1,667 U.S.-based mobile gamers between the ages of 18 and 24 to discover insights. For instance, 22% of zoomers got their first smartphone at age 10 or younger, and 61% got theirs between the ages of 11 and 17. Almost half replace smartphones every two years to three years. Their favorite mobile activities are games, social media, and entertainment such as streaming apps like Netflix or Disney+.

As noted, 86% of them use mobile devices as a gaming platform, compared to 42% who use console/handheld devices and 38% who play on a PC.

During the 2020 COVID-19 pandemic, 66% reported downloading more gaming apps, compared to 59% of Millennials and 56% of Generation X. Gen Z’s favorite games to play are action-adventure, role-playing games, and puzzle/match-3. 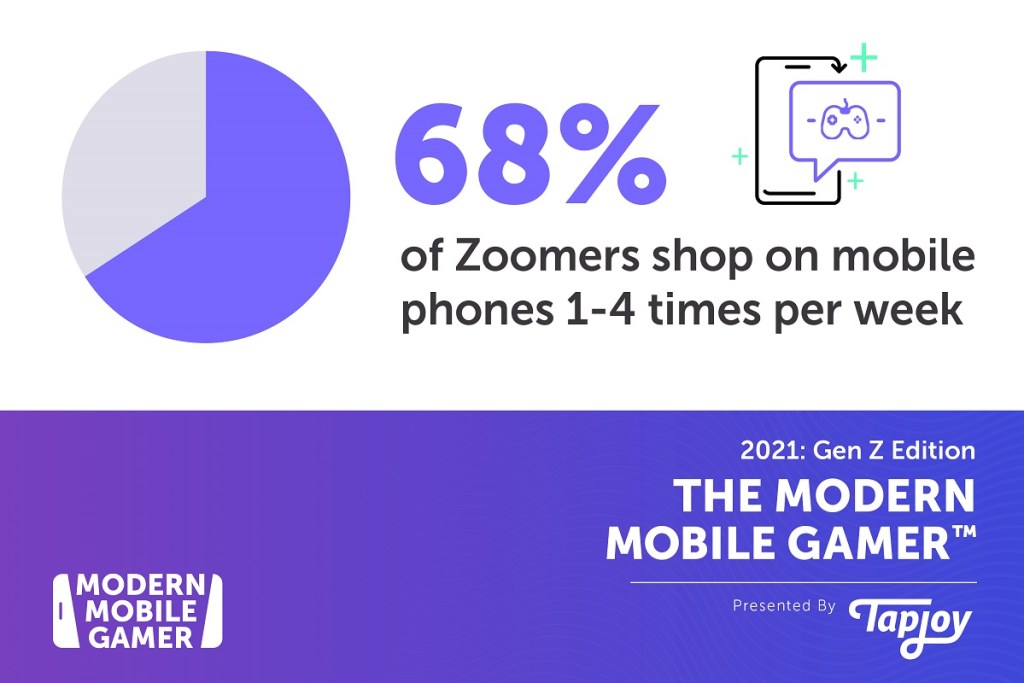 Above: Tapjoy said 68% of Zoomers shop one to four times a week.

They’re big shoppers on mobile. Sixty percent of them frequently purchase to-go food or delivery, and 57% make frequent retail purchases on mobile. Their preferred ways to make purchases on mobile are on branded apps and e-commerce storefronts, through rewarded offers in mobile games, and through Instagram ads, respectively.

Gen Z loves brands, as they’re avid followers of retail brands on social media, with a particular affinity for clothing and fashion brands. Sixty-five percent of zoomers follow clothing and fashion brands, compared to just 52% of Millennials and 40% of Gen X. Zoomers are also the most likely generation to prefer humorous brand content. Gen Z also shows a strong preference for short videos, with 66% listing it as a preferred content type compared to 63% among millennials and 59% for Gen X.

They’ll engage with brands in exchange for value: More than half of zoomers have discovered at least one new product on their mobile devices through content such as short videos, memes and social posts. They dislike search result ads and non-skippable video ads, preferring to engage with rewarded ads in mobile apps.

Tapjoy’s research and analysis also found that the COVID-19 pandemic had a lasting effect on Generation Z. Nearly three-quarters reported playing more mobile games in 2020, and 55% found mobile games “more fun and engaging than expected” during the pandemic. Their top pandemic products were clothing and apparel, to-go food, and beauty/hygiene products, while their top pandemic subscription services were streaming, home goods, and meal kits.

Lauren Baca, the senior director of marketing at Tapjoy, said in an email to GamesBeat that Gen Z is engaged in every part of the mobile ecosystem. Unlike older generations, they’ve never really known a world without smartphones and have been playing mobile games since they could hold a phone, she said.

In 2018, mobile gaming overtook PC and console gaming for the first time, generating $70.3 billion in revenue or 51% of the global market. Baca said. Gen Z was the most likely of all generations surveyed to enjoy other gaming platforms, including PC and console, indicating that their appetite for games is generally high. This correlates with other studies that show young adults to be the most avid gamers.

Another reason for the predominance of mobile games over other platforms is the general accessibility and affordability of smartphones., Baca said. According to Pew Research, 85% of Americans now own a smartphone, with young adults leading the charge at 96% adoption. Cross-platform games like Fortnite and Minecraft have also surged in popularity with titles like these topping the App Store charts. The cross-platform trend gives Zoomers license to engage with their favorite IPs in various contexts, Baca said.

They have also grown up in a world where ads are often optional, so they’re very particular about the marketing and branded content they engage with. They value humor, shared values, ads that respect their time, and those that provide a value exchange, such as rewarded ads in mobile games. Advertisers have to be aware of this.

The data in Modern Mobile Gamer: Generation Z Edition was gathered from surveys run on the Tapjoy network in February 2021. Responses were filtered to include all respondents who identified as United States residents between the ages of 18 and 24.