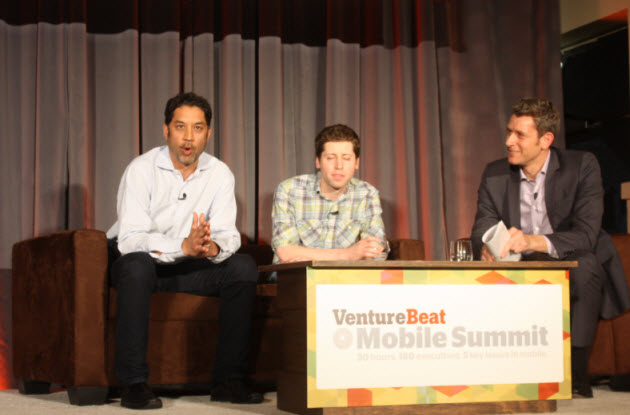 Mobile app distribution is kind of in a state of limbo on Apple’s App Store, thanks to a recent change in policy on running promotions that use one app to market and install other apps on user’s phones.

Mobile app distribution service Tapjoy said last week that a number of its developers have found that Apple has rejected their apps because they were running incentivized app installations, where one app encourages users to download another app as a kind of advertising promotion, in exchange for rewards in the original app.

Mihir Shah, chief executive of Tapjoy, said at VentureBeat’s Mobile Summit today that, after a conversation with Apple, Tapjoy has voluntarily put a limit on these so-called pay-per-install promotions so that an app cannot rise to the top 25 list of apps through this kind of promotion alone. Apps should be able to reach that list through user recommendations, good reviews, and longer usage, or engagement.

“We have put in place a capping mechanism, so no single app can drive the [top 25] charts for another app,” Shah (pictured top left) said. “That went out Thursday or Friday of last week … That cap is pretty reasonable.”

Apple hasn’t commented yet, but it is talking with the affected parties, which include developers of some of the most popular apps on the App Store.

Shah said the company’s developers found out more than a week ago that Apple was rejecting their new pay-per-install apps and updated apps because of Apple’s concerns about whether the apps violated one of the company’s app store rules. In a pay-per-install app, a user is encouraged through an incentive to install another app. The developer of the app that gets installed shares revenue with the original app that steered the user in the first place, so it is a kind of advertising program. And it has been a lucrative one at that.

But when Apple tweaked the way it calculates App Store rankings a couple of weeks ago, it also changed its stance on pay-per-install apps, for a largely unexplained reason. Developers have been directed to section 3.10 of the Apple developer program license agreement, which says, “Developers who attempt to manipulate or cheat the user reviews or chart ranking in the App Store with fake or paid reviews, or any other inappropriate methods, will be removed from the iOS Developer Program.” It may be that Apple views the campaigns as unfairly gaming the system. Apple evidently doesn’t want its top App Store rankings to be manipulated. Some days into the changes, everyone seems to believe that Apple has users in mind as it enforces the 3.1 clause more stringently than it has in the past.

The problem is that Tapjoy, Flurry, AdMob, W3i and Apple’s own iAds generate considerable revenue (possibly hundreds of millions of dollars) through pay-per-install campaigns. Shah said that Tapjoy reaches 10 to 20 million users a day and receives a handful of complaints per month. And mobile app developers have come to rely upon the valuable marketing from pay-per-install programs, said Sam Altman (pictured middle), chief executive of mobile location service Loopt.

Altman said he understands Apple’s concerns but hopes that the parties can reach a middle ground so that pay-per-install doesn’t go away entirely.

“Tapjoy is a critical part of monetization and growth,” Altman said.

Shah said that he and other important developers have begun a discussion with Apple and are working toward a resolution.  The “tweak” to the system that caps the pay-per-install promotions is one part of that.

“We only win if Apple wins,” Shah said. “Apple is the king of the App Store. We need to find a sustainable way to work with them.”

Shah added that Tapjoy’s pay-per-install system works properly because there isn’t just a “daisy chain” of cross promotion going on between users in the same part of the market. He points out that Tapjoy’s top customers are not just game companies. That means that the cross promotion that is happening is serving a real purpose of introducing new users to new kinds of apps. It isn’t just a circular, or insular gaming of the system going on, he said.

Shah said that more major brands are coming into the mobile app market and are planning on using cross-promotion in a big way to get their apps noticed. That will further broaden the community of apps being promoted and users being reached. Finally, Shah said the mobile app market is so fragmented that it desperately needs advertising promotions that truly work. Pay-per-install has proven itself in this respect.