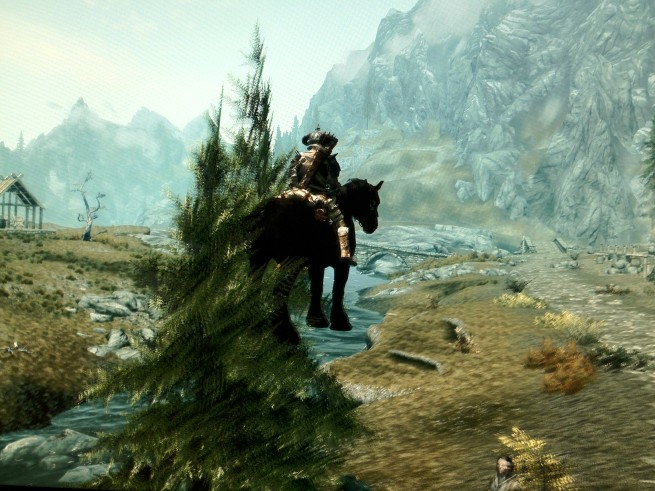 “Statistically, it is not nearly as bad as it seems,” Howard told IndustryGamers. “Meaning, by all the internal and external data, this is our most solid release.”

Bethesda Softworks’ games have a long history of being released with countless bugs and glitches, often rendering certain quests and content impossible to complete. The PlayStation 3 version of Skyrim in particular suffered from tremendous slowdown after a couple hours of play.

The PlayStation 3 “lag” also occurred in previous triple-A titles from the studio, including Fallout 3 and The Elder Scrolls IV: Oblivion, so the whole “Oh man, we totally didn’t expect this” line is a little hard to believe. A member of Obsidian Entertainment, who developed Fallout: New Vegas (also published by Bethesda), acknowledged the issue and explained why it keeps popping up.

“[Skyrim is] also our most popular by a large factor,” Howard said, “so we do have a lot of people on the PS3 who play the games a lot, and their games are at a state that the game is just taxing the PS3 enough. That’s a fact; so, it really wasn’t until we were able to get save games from the users — because, literally, how they play the game over 100 hours — some of it, very little of it, we were able to reproduce and take care of on our own and a lot of it that you’re seeing now, we weren’t. So over the course of, like, December, the community helped us. We got their save games. We’d literally have to look in and say, ‘What quests do they have running, what order? Oh, he’s doing this. He’s got these dragons here. This script is running. Why is it kicking out this many things?'”

For those not familiar with game development, what Howard is referring to is also known as “quality assurance,” and is usually done before a game releases.

Howard gave the opening keynote at last week’s DICE 2012 conference in Las Vegas, Nev. and curiously did not take the opportunity to address Skyrim’s issues. Instead, to kick frustrated customers while they were down, Howard obliviously teased a number of highly desirable features (such as dragon mounts, new weapons, graphical enhancements, etc.) that the development team had created in one week.

I understand that Skyrim is an extremely ambitious title, and for those unaffected by the PlayStation 3 lag effect, the game is quite enjoyable, even despite many of the technical issues. But the fact that unfinished, untested retail releases have become a seemingly acceptable signature of Bethesda, all while selling upwards of 10 million units, is concerning. It fuels what is already a dangerous mindset of many publishers who believe a product can be released now and fixed later — and ultimately diminishes the overall quality of new games. This is in direct opposition to companies like Valve (Half-Life, Portal) and Blizzard (Warcraft, Diablo) who are known for the tagline: “It will be done when it’s done.”

The silver lining is that Howard also stated downloadable content for Skyrim will be far more substantial than in Bethesda’s previous games and will feel more like expansions. Luckily none of the DLC has been tied to an arbitrary marketing date like 11/11/11, so there’s a better chance they’ll be given more rigorous testing before being sold.