In game-industry deal-making, there’s Tencent, then there’s everyone else. The Chinese behemoth led or participated in over $4 of every $10 invested in games companies worldwide in the last 12 months to the end of Q1 2018. It was involved either sell-side or buy-side in over three-quarters of all games M&A deal value (i.e., dollars) in the same period. And this is in the context of record totals (not just Tencent) over $2.1 billion games investment and over $14.4 billion games M&A in the first quarter of this year alone.

Digi-Capital’s new Games Report and Deals Database Q2 2018 tracked a total of nearly $22 billion total games market investments and M&As (again not just Tencent) in the last 12 months, as well as forecasting global games software/hardware market revenue to top $165 billion this year and over $230 billion by 2022. Let’s dive into the detail to see what’s behind the numbers. 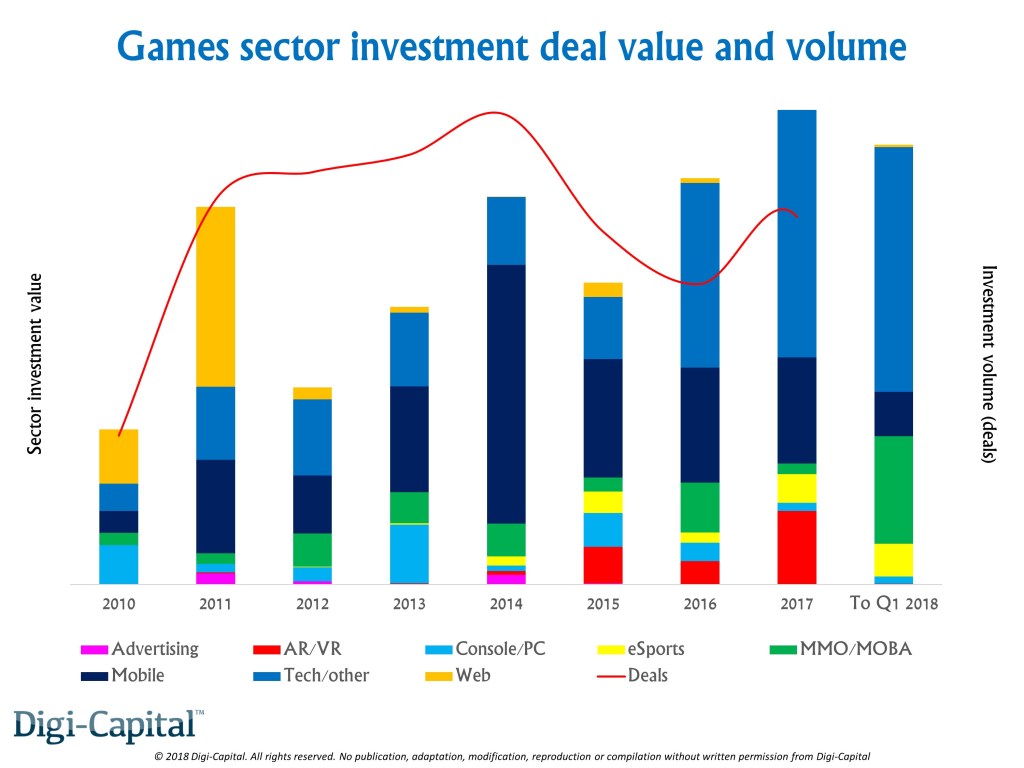 Above: Games Investment to Q1 2018, from Digi-Capital

Games investment in the last 12 months broke all previous records, with over $4.2 billion dollars invested in games market companies. As has become the new normal in the last few years, most of this money went into games tech and platform companies rather than game developers. In contrast to mobile games’ investment dominance of the last 5 years, the first quarter saw MMO/MOBA games investment, as well as AR/VR and eSports over the last 12 months.

Games investment dollars were dominated by mega-deals as usual, while the number of investment deals remained broadly flat. Amongst the big Tencent investments were: 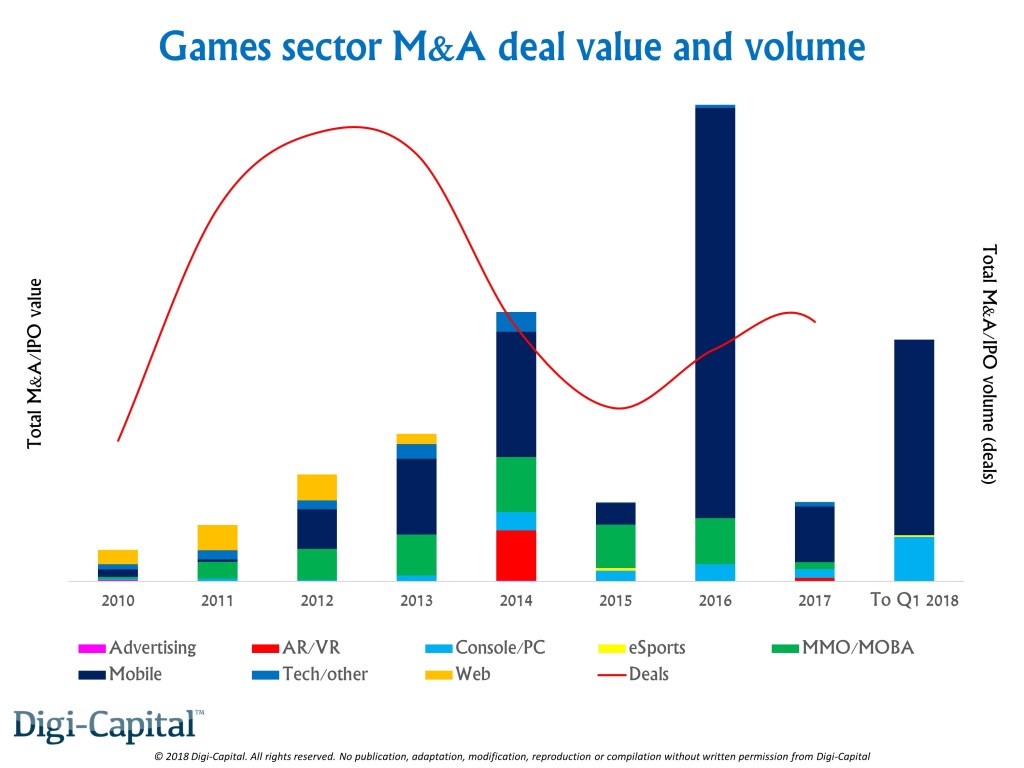 Above: Game industry mergers & acquisitions market to Q1 2018, from Digi-Capital

Games M&A in the first quarter was dominated by one giant deal, with Naspers selling 2 percent of Tencent for over $10 billion dollars for a 60,000 percent return (not a typo!). Tencent was involved in the $2 billion plus acquisition of Vivendi’s stake in Ubisoft, as well as buying a $142 million stake in Seasun. Non-Tencent M&A included Aristocrat buying Big Fish Games for just under $1 billion and Plarium for $500 million, as well as Stillfront Group buying Goodgame Studios for $318 million.

Even with over $17 billion of games M&A in the last 12 months, the high-water mark from 2016 of $28.4 billion remains an elusive peak. As with investments, the number of games M&A deals was broadly flat for the quarter. 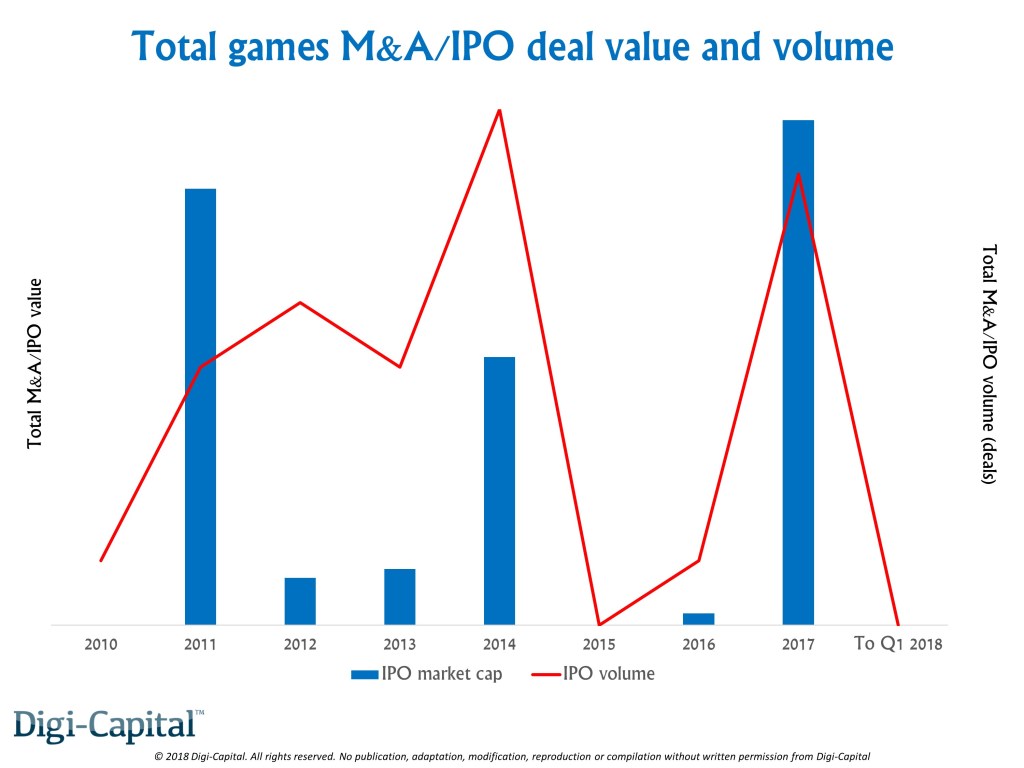 Games IPOs might be reverting to the pattern of the last decade, where one bumper year is followed by two quiet ones. So where 2017 saw Netmarble Games, Sea Limited (Garena), Razer and Rovio IPOs, the first quarter of 2018 was largely silent. The rest of the year could determine whether we’ll need to wait until 2020 for the next big round of games IPOs.

While this year got off to a flying start for games deals, one thing’s for sure. Tencent’s the biggest player, and there’s more where that came from.

Tim Merel is managing director of AR/VR and games adviser Digi-Capital. You can find full details of over 2,100 games investment, M&A and IPO deals by sector, platform, country and investor/acquirer in Digi-Capital’s new Games Report and Deals Database Q2 2018.