The consolidation in the top ranks is becoming evident as the top 10 companies made up 54 percent of the industry’s revenues. Tencent itself — which publishes titles such as Crossfire and has stakes in companies like Riot Games, Supercell, and Epic Games — claims 10 percent of the global market. If Supercell’s revenues are included (Tencent owns 84 percent of it), then Tencent has 13 percent.

The year’s revenue growth was entirely due to a stronger performance of the top 10 companies, which grew by 24 percent to reach $53.7 billion.

Some of this growth resulted from acquisitions, such as Activision Blizzard’s acquisition of King. However, most of the growth was organic and accounted for by companies that are already market leaders, which underlines the very substantial competitive advantages that today’s market leaders enjoy.

The revenues of the top 11 to 25 companies showed hardly any growth on an aggregate level, remaining flat at $16.7 billion. However, on an individual level, the companies in this group enjoyed very different fortunes, with some performing very well and others seeing revenues decrease significantly. 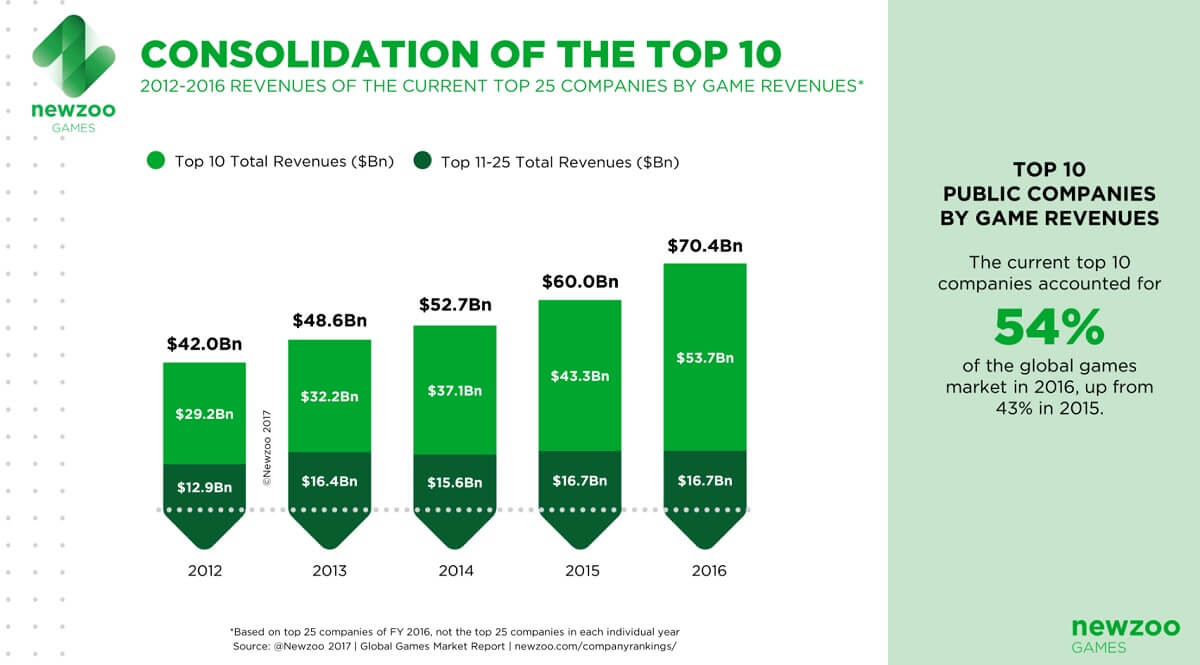 Above: Revenues of the top 10 public game companies.

Interestingly, the big “pure play” mobile game companies — such as Gree, Gung-Ho, and Mixi, — did not perform the best in this group. Rather, it was some of the traditional stalwarts of the industry, such as Take-Two, Square Enix, and Ubisoft. Sony and Activision Blizzard were the second and third biggest public game companies last year, with revenues of $7.8 billion and $6.6 billion, respectively.

Its best performing mobile title, Onmyoji, has been in the top grossing charts since its release in September of last year and is proving worthy competition for Tencent’s King of Glory.

Activision Blizzard had the second-highest revenue jump with 42 percent, driven by the acquisition of King and the success of Overwatch, which is quickly developing into one of the world’s biggest esports titles.

Nintendo was the only company in the top 10 whose revenues declined, by 6 percent year-on-year to $1.8 billion. Pokémon Go was a huge success but generated little direct revenues for Nintendo although it did boost sales of other titles in the Pokémon series and drove Nintendo 3DS sales.

The much-hyped Super Mario Run, released in December, grossed around $50 million in its first few months. Relative to the huge number of downloads, this result is not very impressive, raising questions about the wisdom of using the so-called “free-to-start” model with a relatively high fixed price required to play the full game.

Nintendo’s latest mobile title, Fire Emblem: Heroes, has done well in Japan but is not making a splash in the West. Nintendo hardware sales for the Wii U slowed dramatically during 2016 as anticipation was building for the Nintendo Switch, which released in March of this year. The Switch will have to continue its strong launch performance to turn around the company’s fortunes.

Sony, on the other hand, was the second-largest public game company in 2016, growing by 33 percent to generate $7.8 billion.

Newzoo said it will be interesting to see how revenues for the Japanese rivals compare in 2017. Nintendo is increasing its focus on mobile but sticking to a more traditional pay-to-play business model while Sony appears to have fully embraced the games-as-a-service model in the console segment, including the announced expansion of the streaming offering of PlayStation Now.