The biggest game publisher in the world isn’t responsible for Call of Duty or FIFA — it’s the Chinese company that owns League of Legends.

Blockbuster games still make for a lucrative business model, but free-to-play has turned Tencent into the biggest publisher in terms of game revenues, according to a report from market-research firm NewZoo. That Chinese company holds a majority stake in League of Legends developer Riot and a minority share of Gears of War studio Epic Games. Those subsidiaries’ games, along with Tencent’s Chinese releases, helped the company generate $3.48 billion in the first half of 2014. That’s 50 percent more than the next closest publisher, Electronic Arts, whose games have made $2.34 billion during the same period.

NewZoo provided a look at the top 10 companies in terms of game revenues, and it shows that not only is Tencent the highest-grossing, but it is also one of the fastest growing publishers as well. 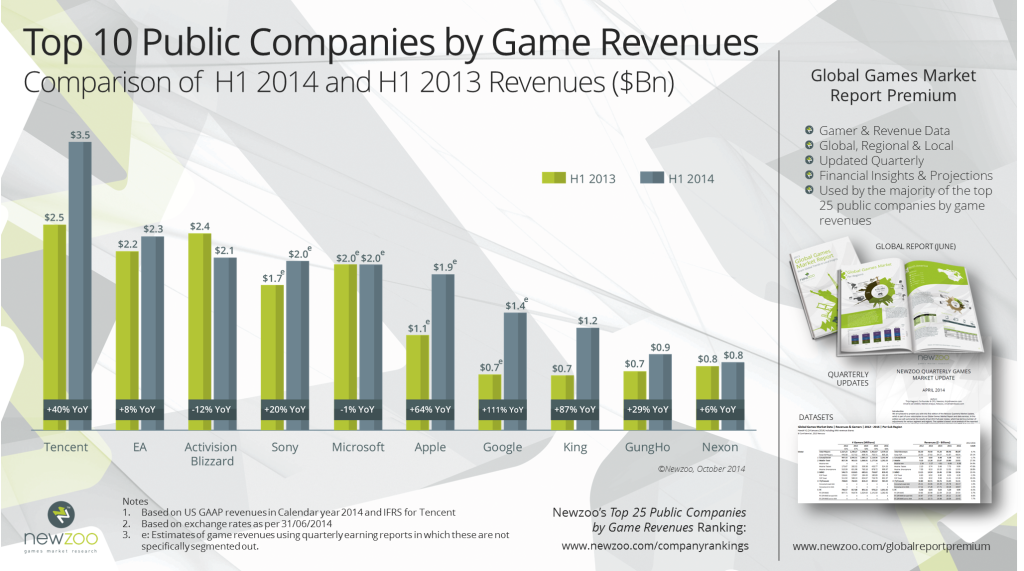 Above: NewZoo shows that few companies are growing like Tencent.

Despite a major publisher like Activision experiencing a double-digit decline, revenues for the industry as a whole is up 17 percent.

While Tencent, EA, and Activision continue to dominate the list, Sony and Microsoft are not far behind at around $2 billion each, according to NewZoo estimates. Right behind them are Apple and Google, which are the two companies that are experiencing the most growth in the gaming sector.

“Apple’s rise to No. 6 [on the list] is a testament to the continuing strong impact mobile games are having on the gaming industry,” reads the report. “The impressive growth, bolstered by increasing smartphone and tablet usage in emerging markets, is doubly revealed by Google rising five places to take No. 7.”

Apple’s gaming business generated $1.9 billion in revenue in the first half of 2014. That’s just behind Sony and Microsoft, and it is up 64 percent from the equivalent period in 2013. Google Play games made that company $1.4 billion, which is up a whopping 111 percent year-over-year.

The rest of the list comprises Candy Crush Saga developer King, Puzzle & Dragons publisher GungHo, and PC free-to-play publisher Nexon. That means that the majority of this list is made up of companies that focus on either mobile or free-to-play. Even the traditional console-publishing powerhouses like EA and Activision are seeing significant growth on smartphones and tablets.

All of these companies also outperformed Nintendo, which came in at No. 11 with $806 million in the first half of 2014.

For a full look at the top 25 companies by game revenue, check NewZoo’s site. The research firm is also selling a full report based on this data.