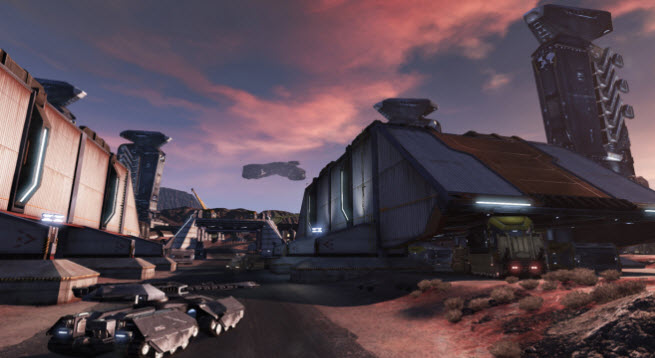 Icelandic game publisher CCP Games announced today that its first-person shooter online game Dust 514 will formally launch on the PlayStation 3 on May 14.

Reykjavik, Iceland-based CCP Games has created the shooter as a downloadable massively multiplayer online game, where players can engage in ground combat in the same sci-fi universe as CCP’s Eve Online title. In fact, players in Dust 514 can affect the gameplay of Eve Online and vice versa. The game is groundbreaking because it combines not only two online universes but also PC gamers with connected PlayStation 3s.

In Dust 514, you can play as a mercenary and engage in massive battles on a particular planet within the full galaxy of New Eden, the universe of Eve Online, which has half a million subscribers. As the tide shifts on the planet, the ground forces can take over weapons that attack the starships in Eve Online. In addition, starship pilots in Eve Online can rain devastating orbital strikes against enemy squads on the planet. So players can form alliances between the ground and space forces. The combat will eventually stretch across multiple planets. On the ground, up to 32 players will be able to fight at the same time.

“Reaching this point has required many years, hundreds of CCP employees, and the engagement of millions of players who contributed fantastic feedback during the beta process,” said Hilmar Veigar Pétursson, the chief executive officer of CCP. “Now we start the real journey, which, decades from now, we will look back on with astonishment at all we accomplished. The Eve universe will outlive us all.”

CCP was founded in 1997, and it launched Eve Online in 2003. The game has had an amazingly long run so far. In honor of its second decade, CCP announced today that it will launch Eve: The Second Decade Collector’s Edition in October.

The $149 limited-edition box game is available for preorder now. It includes a series of exclusive collectible items as well as a 190-page hardcover book commemorating the first decade of play. It also includes a “mystery code” that will grant owners special privileges in the future.