With Rogue One: A Star Wars Story hitting theaters last week, we have that galaxy far, far away on our brains, and that led us to suss out the top 10 best games from that franchise during our weekly GamesBeat Decides podcast on Monday.

You can see how we came to our conclusion by clicking play on the clip above. As you’ll find while watching our deliberations, we take this process seriously. In the end, we came up with a list of 10 Star Wars games that most of us don’t hate. That includes shooters from every era of gaming, a few flight sims, and even a game based on Episode I: The Phantom Menace. May The Force forgive us.

[These decisions where made in the absence of managing editor Jason Wilson, who has more experience with Star Wars games than these three knuckleheads combined. Jason regrets editing instead of podcasting this week, and he’s planning on firing the lot of them after seeing the entire X-Wing series left off the list — Ed.]

Rebel Assault is one of the first popular CD-ROM games. LucasArts, Lucasfilm’s gaming division, released it for Sega CD, 3DO, and MS-DOS. Yes, that’s right: DOS. You didn’t launch this game from an icon in Windows. Instead, you had to go into the DOS prompt and find the executable in your D:/ directory. Once in the game, it is a cheesy mess that relied on prerendered visuals and live actors for the story segments. We’re including it here because, as hokey at it is, it is one of the better examples of that era — both for Star Wars and gaming as a whole. [X-Wing is a much better example of Star Wars from this era, but these soon-to-be-fired knuckleheads didn’t even mention it! — Ed.]

Above: There was a time when we didn’t have a million of these games.

Making video games for young children is a tough business. Grabbing a big, familiar license often means that developers and publishers don’t have a lot of their budget left over to make a great game. That changed a bit about 10 years ago when developer Traveler’s Tales created the Lego Star Wars games. These blocky adventures were simple and easy to understand, but they also had a number of smart features that made them great for families to play together. TT put an emphasis on unlocking characters and couch multiplayer. That meant a mother and her children, for example, could work together to unlock their favorite characters.

All the while, Lego Star Wars: The Complete Saga retold the franchise’s stories in Lego’s humorous style. It is one of the best examples of a game that is made for kids or anyone who was once a child. And TT is still making these games today.

Star Wars is experiencing a resurgence thanks to The Walt Disney Company taking over the brand and unleashing new films. As part of that endeavor, Disney has worked out an exclusive licensing agreement with Electronic Arts for blockbuster Star Wars games on console and PC. So far, that agreement has only produced Battlefront. With this game, developer DICE has slapped a Star Wars coating on the underlying elements of its Battlefield shooters.

Battlefront is the most photorealistic Star Wars game yet, and it deserves its spot on this list for the visuals alone. Stormtroopers, AT-ATs, and other familiar, Original Trilogy-era characters and vehicles are nearly indistinguishable from their film counterparts. But on top of the graphical beauty, Star Wars: Battlefront is an all-around impressive Star Wars shooter that does a fine job of making you feel like you’re fighting a battle from The Empire Strikes Back or Return of the Jedi. At the same time, the game isn’t welcoming to new players these days because you need to spend a lot of time unlocking some of the better weapons and equipment. 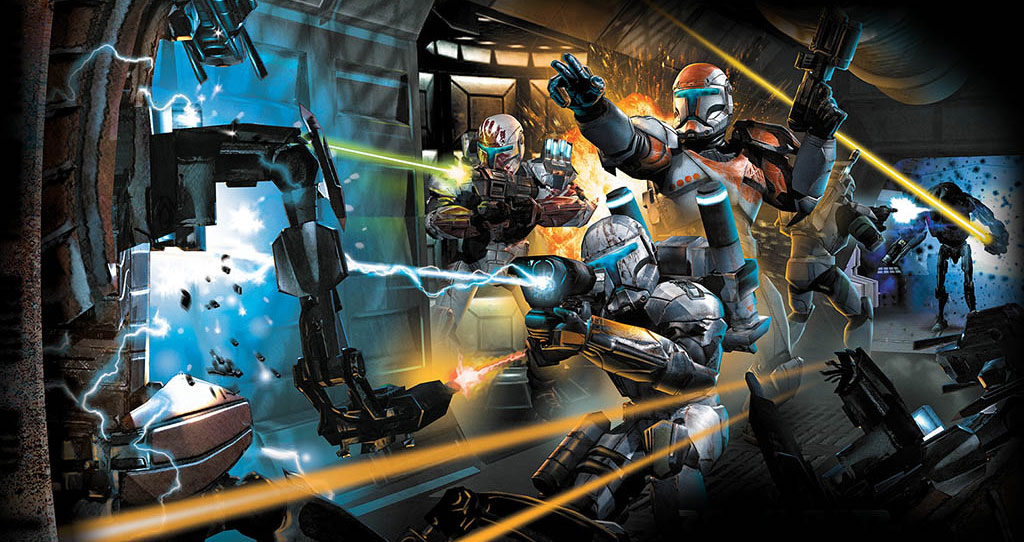 Above: One of the better Prequel-era games.

During the dark days, as the Prequel movies slowly attempted to kill us, gaming provided a couple of bright spots for Star Wars fans. Among the brightest of those is the Republic Commando shooter for Xbox and PC. This put you in charge of an elite group of clone troopers who all have differing skills. You would then encounter various challenges that would require you to use your team creatively to survive and move on.

Before you could destroy the Death Star from the comfort of your home, you had to brave your local, smoke-filled arcade to do so. In 1983, Atari released the Star Wars game for arcades with vector graphics that enabled you to pilot an X-Wing and take on the Empire’s most powerful weapon.

A lot of the best Star Wars games are the result of a developer combining a popular game with the Star Wars universe. That’s what happened with Dark Forces after LucasArts decided to combine Doom with Star Wars. Like in the id Software shooter, you explored a 3D environment and had an arsenal of weapons to take on Imperial opponents. The game looks rather dated now, but it has led to a legacy of Star Wars shooters that are well represented on this list.

Also, before Rogue One, Dark Forces told the story of how the Rebel Alliance stole the Death Star plans. Unfortunately, I don’t think Kyle Katarn made the cut for Disney’s new canon. 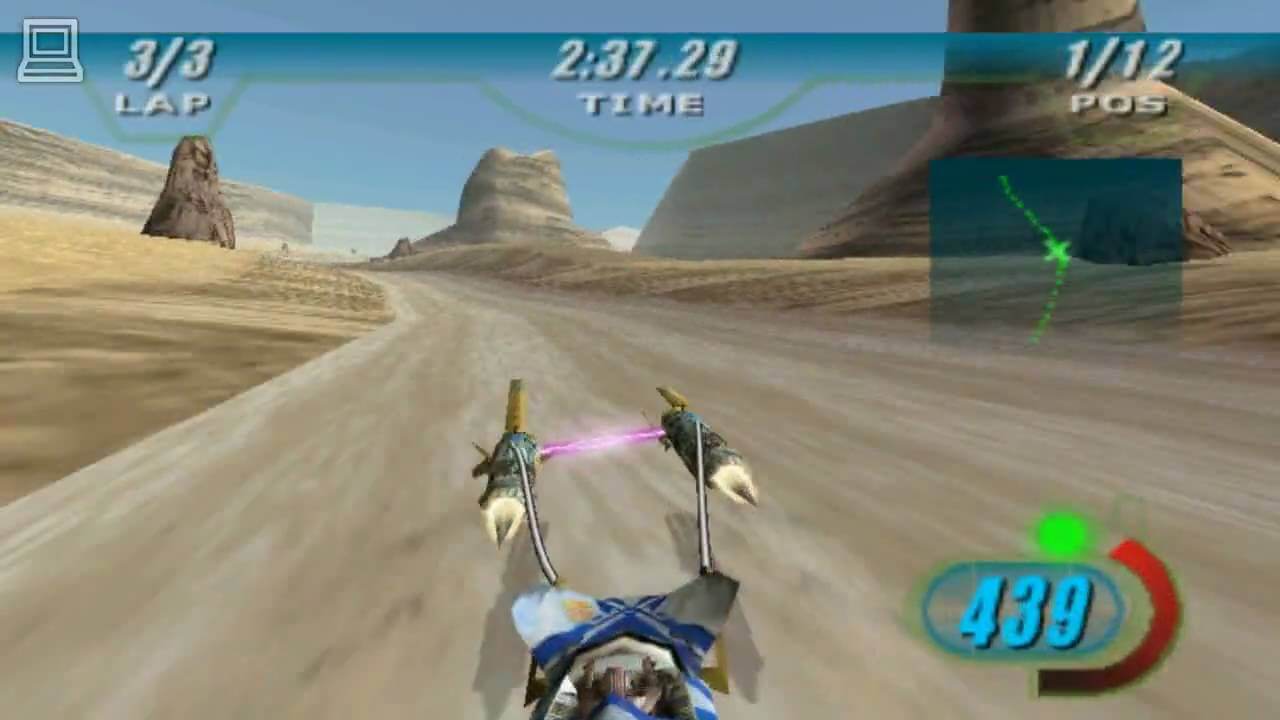 Above: Now, this is podracing!

While Star Wars: Episode I — The Phantom Menace gets plenty of hate, this racing game for the N64, Dreamcast, and PC is worth playing. It has you piloting a pod in a system-spanning circuit as Anakin Skywalker or a number of other characters from George Lucas’s piece of poodoo. The sense of speed is great, and the game had a solid physics engine that made you really feel like you were barely controlling a pair of massive engines tied together with some rope. 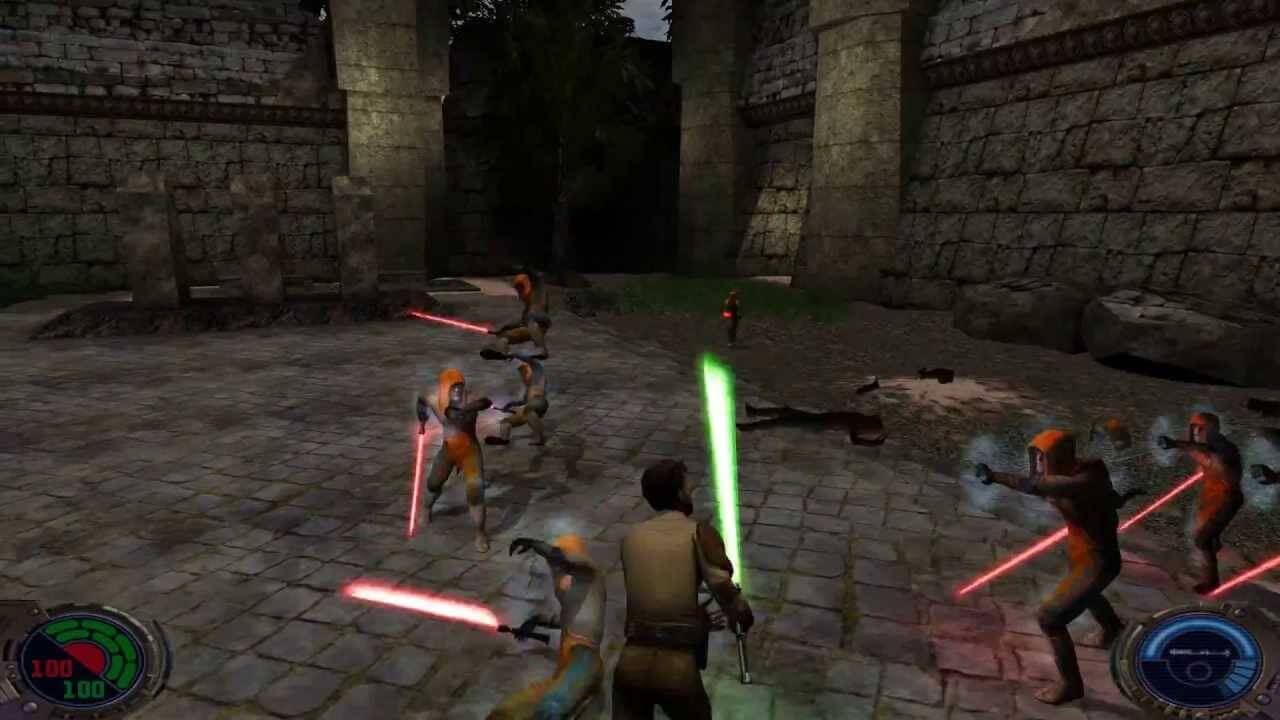 Above: Jedi Outcast did not lack lightsabers.

Seven years after Dark Forces, that series expanded into a huge franchise of its own. Jedi Knight II is the culmination of that series as it gave Kyle Katarn a suite of Force powers and lightsaber attacks to use during combat. Developer Raven Software had moved on from the original Doom engine and instead used id Tech 3, which powered Doom 3 and is still the foundation of the Call of Duty series today.

That means Jedi Outcast played better and looked better, and it is just an all-around more Star Wars experience because of those factors. 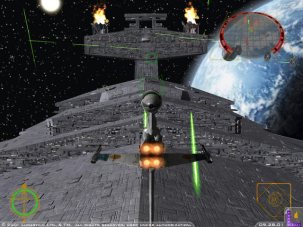 Above: One of the best GameCube games.

In the early 2000s, Nintendo’s GameCube console is one of the best gaming machines for Star Wars fans. Developer Factor 5, Nintendo, and LucasArts worked together to create a sequel to the Nintendo 64 aerial shooter Rogue Squadron as a launch game for the little purple box. When it launched, it is a visually stunning masterpiece that re-created some of the best space battles from the film franchise better than any game before it.

And this game holds up. It’s still one of the best-looking Star Wars games ever made. 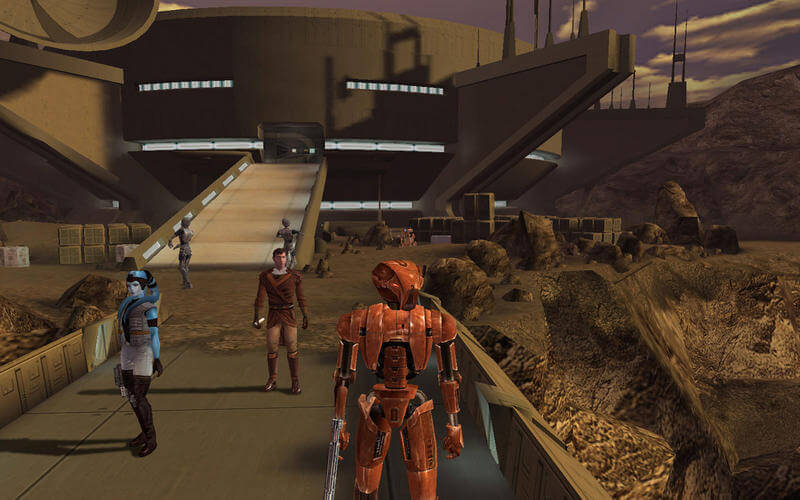 Above: Star Wars: Knights of the Old Republic has some memorable characters.

Knights of the Old Republic is what Disney should look to as it moves ahead with expanding the Star Wars universe. Developer BioWare expertly took the themes and aesthetics of George Lucas’s movie, and it applied those concepts to an entirely separate story set thousands of years before the events of A New Hope. Thanks to Jedi, blasters, and droids, you still feel like you’re in the same universe, and you don’t miss the connection with the Skywalkers or the other film characters because you meet new characters that are just as interesting.

[Sigh. They didn’t even pick the right Knights of the Old Republic — Ed.]

On top of the setting and the heroes/villains, Knights of the Old Republic tells a wonderful story and features some satisfying role-playing mechanics that may rival many modern games. Hell, I think it’s probably time to replay this classic again.

We came up with our top 10 during this week’s GamesBeat Decide podcast, and you can challenge our decision by emailing games+podcast@venturebeat.com. And be sure to check out the show using one of the following methods: