Last year, no online PC games surpassed $1 billion in microtransaction revenues. This year, it looks like a handful might reach that milestone.

League of Legends has racked up $946 million in in-game spending revenues since the beginning of the year. Industry-intelligence firm SuperData Research published a breakdown of the 10 highest-grossing online PC games in terms of player spending from January through September. Unsurprisingly, developer Riot Games’ megapopular multiplayer online arena battler is the top game of the year so far. And it’s on pace, along with a few others, to bring in more than $1 billion.

League of Legends is so lucrative that it actually makes more money than World of Tanks, Counter-Strike: Global Offensive, Dota 2, and Hearthstone: Heroes of Warcraft combined.

Check out the full list below, and keep in mind that this only takes into account revenues from in-game spending on PC (so no subscription revenue for World of Warcraft or mobile spending for Hearthstone): 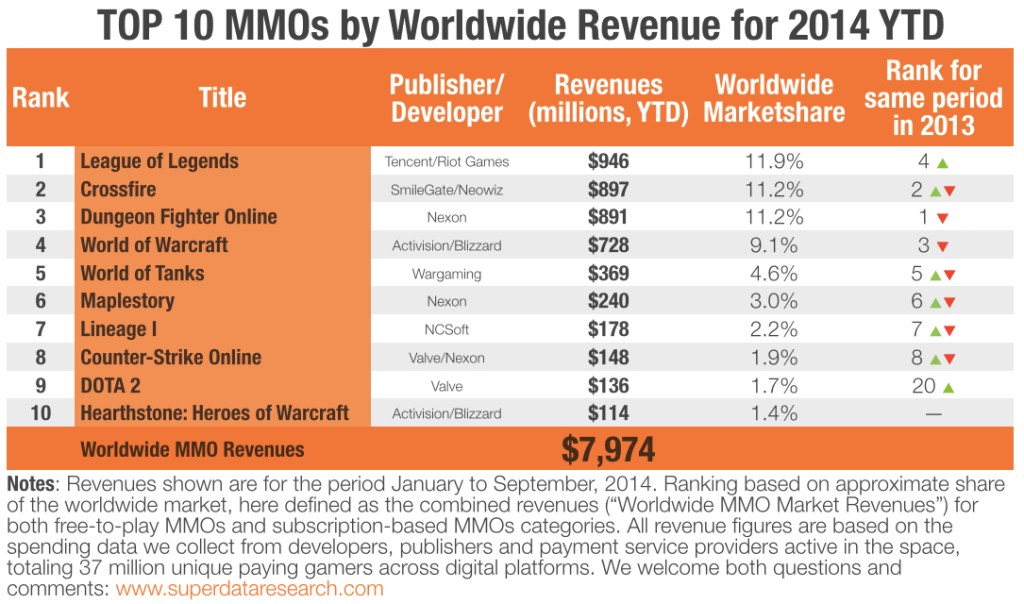 This chart looks pretty similar to 2013’s totals, which we reported on previously. The difference is that League of Legends is on top for 2014 instead of the Chinese military shooter CrossFire, and all of the top games are making more money from in-game spending than ever before.

“Riot Games’ emphasis on providing a unique player experience, rather than focusing on revenues, has paid off,” SuperData chief executive Joost van Dreunen said. “Remarkably, incumbent titles like Crossfire and Dungeon Fighter managed to maintain their leadership positions, providing evidence to the notion that free-to-play gamers are much more loyal than is generally assumed.”

The big movers on this list include Dota 2, which is up from No. 20 last year to No. 9, and World of Warcraft. The Blizzard massively multiplayer online game made only around $213 million from in-game spending throughout all of last year, and it has more than tripled that total just through the first nine months of this year.

In-game spending is growing as more players around the world grow accustomed to free-to-play mechanics. North America has spent $1.4 billion on free-to-play games this year, but Asia has already surpassed $3 billion.

“A key reason why free-to-play is so popular among publishers is its [cap]ability to distribute and monetize new markets,” said van Dreunen. “In the absence of an installed console base and in countries where people generally play at Internet cafés rather than at home, free-to-play games offer high-quality gameplay that is also accessible.”

This has enabled emerging markets like Brazil, Russia, and Turkey to come online and make a big impact in terms of revenues for PC games.