SAN FRANCISCO — It will take the video game industry a long time to address the panoply of social justice concerns in video games, but the 2014 Game Developers Choice Awards demonstrated that gender issues, at least, are not going back in the box.

Video games have long been held as the domain of straight, white men. That describes the majority of developers, the main characters in narrative-heavy games, and if we strip the sexual orientation, the default setting for avatars. No one used to debate the point. But over the last few years, the industry has started facing this issue, in large part due to the rising swell of cultural critics writing about games.

At the 2013 Game Developers Conference, a panel titled #1ReasonToBe crystallized a Twitter campaign about all of the reasons why people needed to speak up about how difficult it was for women to break into the video game industry — or to thrive in the industry once they’d clawed their way in. The panel exploded into press coverage, and for many it became a symbol of the kind of programming that the event was obviously missing.

GDC 2014 has a second edition of the #1ReasonToBe panel today, and it’s part of a much larger track of social justice-oriented panels tackling not only issues of gender in video games but also issues of race and sexual preference. Representation of different groups is being discussed alongside how to diversity development studio workforces. 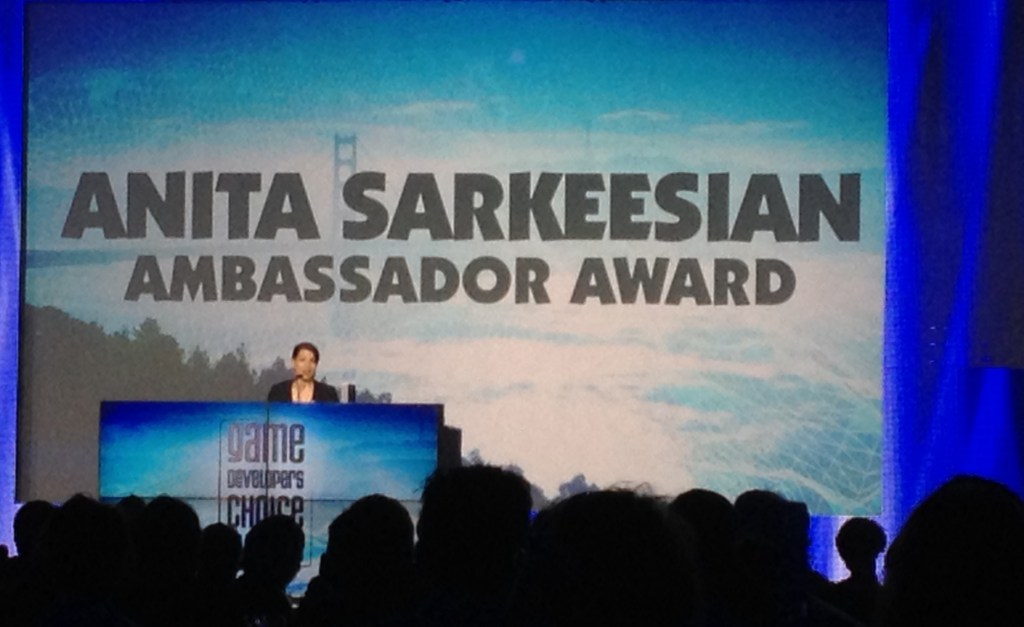 Above: Anita Sarkeesian accepts the Ambassador Award at the 2014 GDCAs

These discussions are here to stay, and the 2014 Game Developers Choice Awards reflected the tone of this year’s conference. Abbie Heppe, a former journalist at G4TV and the current community manager at Titanfall developer Respawn Entertainment, was the first women host of the GDCAs. Media critic Anita Sarkeesian, the creator of the video blog Feminist Frequency and the recent Tropes vs. Women in Video Games video series, was the first woman to receive the Ambassador Award.

The Last of Us, a game that’s been widely noted for its strong female character, Ellie, won both the Best Narrative and Game of the Year awards. Best Debut went to The Fullbright Company, whose celebrated game Gone Home is largely about a teenage girl discovering her sexuality. And while this is outside the scope of the GDCAs, it’s still worth mentioning that the Nuovo Award at the Independent Games Festival Awards, which celebrates new and innovative game designs, went to Luxuria Superbia, also a game about exploring a woman’s sexuality.

As the Game Developers Choice Awards are exclusively peer-driven, they are the most direct conduit into the spirit of the video game industry than any other set of awards. Even if it still has a very long way to go on increasing the number of women in game development, addressing problematic representations in video games, and all the other issues being discussed in the Advocacy panel track this year, the 2014 GDCAs told us that people can’t ignore these issues any longer.

They may take a long time to deal with, but they will be dealt with.