I truly hate to keep bagging on it, but I’m just not a fan of Ouya. The bloody thing was supposed to be my indie-heaven hero. Instead, it keeps letting me down.

It does, however, host several fantastic games.

I’ve said this several times, but the smaller-scale nature of Ouya’s catalog pretty much eliminates the possibility of a single, console-selling killer app. It needs an array of outstanding titles — a killer set, if you will — that it can heavily promote as the quintessential, must-play Ouya experience. Yes, you can get Final Fantasy III, You Don’t Know Jack, and The Bard’s Tale on Ouya, but it’s an indie platform, and indie games sell Ouya better than anything else in its arsenal.

Here are the five best I’ve found so far. They might not settle the argument on Ouya’s worthiness by themselves, but they’re a very, very good start.

Or you could get most of them on other platforms. 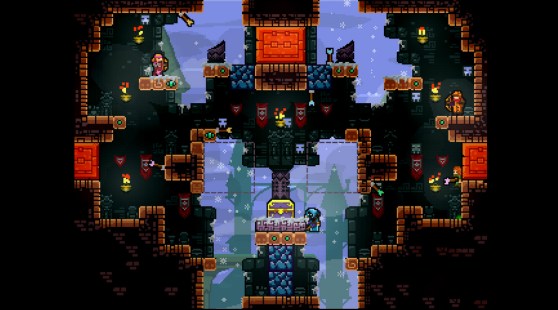 Above: You come at the king, you best not miss.

If I described what Ouya does best, “The illegitimate spawn of Smash Brothers and Hotline Miami” isn’t normally the first thing I’d say. But here we are, and TowerFall easily deserves to be the poster child for everything Ouya could be.

It’s not so much the setup — a four-player, fantasy 2D arena fight — so much as the execution. Players hop around a castle snatching power-ups and shooting one-hit-kill arrows at each other, and your ammo is limited. If you’re playing with a full crew, you don’t even start with enough arrows in your quiver to take everybody out. You’ll have to grab some off dead opponents (or missed shots stuck in walls) or get lucky with a treasure-chest pick-up. Or, as I found in one nail-bitter, tag an opponent by jumping on their head. That squeaker brought the room down.

TowerFall nails moments like those with regularity — long-distance shots, arrow-on-arrow deflections, you name it. The full game also offers a wealth of options and tweaks to personalize those matches, but like the best games out there, you can fire up Towerfall and it is immediately fun, win or lose. That helps during the instant replays where you see just how close you came to victory … or how you blundered into humiliating defeat. 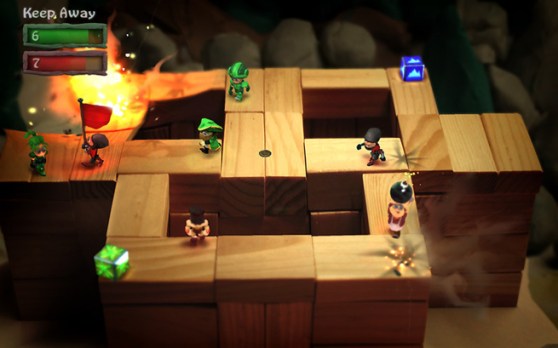 Above: Another new feature in Pikmin 3: blowing s*** up real good.

The first Ouya game I couldn’t put down, BombSquad is another four-player arena battle game, only with high explosives. It’s also one of the best-looking games on the system, and I’m not just saying that because you get to blow up tiny Arnold Schwarzeneggers.

You and your amigos charge around various platforms holding and hurling bombs at each other, and aiming those big cannonball-type weapons — which roll drunkenly after you toss them — definitely comes with a learning curve. Lesson No. 1: Throw it and get the hell out of the blast radius before it takes you out, too. Add sticky bombs, freeze bombs, techno-bombs, mines, and environmental hazards like exploding barrels and it doesn’t take long for things to go completely sickhouse. In the single-player mode, you also face harassment from bare-chested melee fighters who speak exclusively in Schwarzeneggerian grunts.

Those wry touches add immensely to BombSquad’s charm. So does the marching-band soundtrack. It turns out nothing whips me into a bomb-hurling frenzy quite like The William Tell Overture. BombSquad even stretches out into some very well thought-out game types, including a Capture the Flag that better resembles 7-on-7 football. With bombs.

Honestly, if every game on Ouya felt as joyous and polished as BombSquad, it would fly off store shelves. It’s a standout on any system. Just try to play it without cackling evilly. I couldn’t.