They helped us get through the most dangerous places in the world. Lesser creatures would run from the sight of mutated animals and giant mechanical beasts, but our hardy four-legged companions stood by our side, patiently waiting for our next move.

Dogs played a pivotal role in three big-budget games this year: Mad Max, Metal Gear Solid V: The Phantom Pain, and Fallout 4. All of them have worlds so big that, at times, it can feel a little lonely running through them by yourself. The developers of those games must’ve thought the same thing, because they all gave us pets to play with. Some are more useful than others. And at least one of them is kind of ugly!

That’s right, it’s time to determine gaming’s best dog of the year. Using carefully chosen categories, we’ll weigh the pros and cons of each mutt to figure out who deserves this coveted title the most. 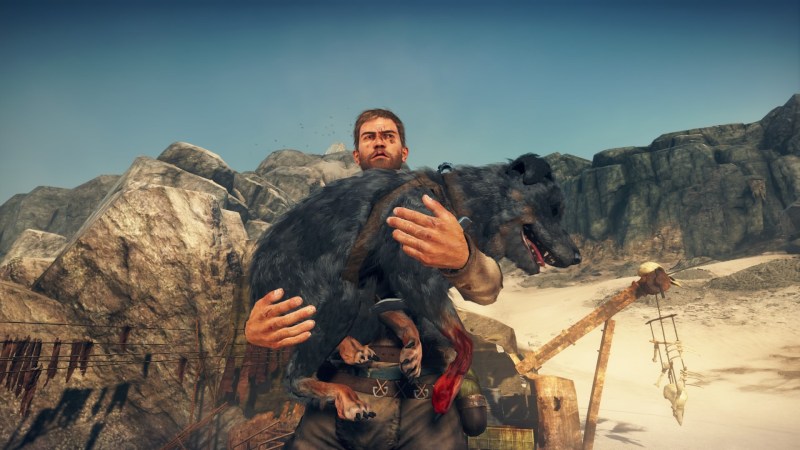 Above: Dinki-Di quickly turns from your enemy to your friend.

Dinki-Di (named after a fake brand of dog food in the game) lived a rough life before meeting Max. His old master was the vicious Scabrous Scrotus, son of wasteland ruler Immortan Joe. But Scrotus kicks Dinki-Di off to the side after he fails to attack Max during a struggle on Scrotus’s war rig. An unconscious Max later wakes up without his car or much of his clothes, and an injured Dinki-Di is right there beside him.

That about sums up the relationship between Max and Dinki-Di. They’re both outcasts. But Dinki-Di doesn’t seem to share Max’s benevolence. He just sits on his ass in his makeshift dog house until Max summons him. 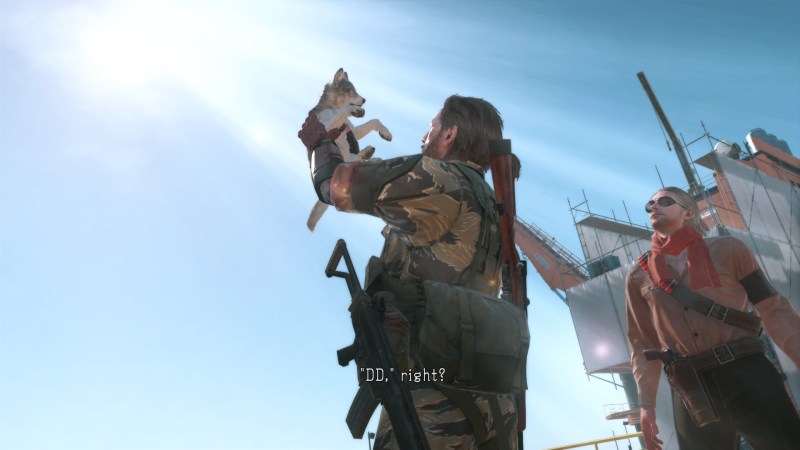 Above: DD’s just a cute little pup when Snake finds him.

DD got his name from Snake’s mercenary outfit, Diamond Dogs. You meet the one-eyed pup while sneaking around in Afghanistan. After taking him to your Mother Base headquarters, Revolver Ocelot begins to raise and train him. DD slowly grows up as you complete more missions and return to HQ to check in on him.

Eventually, you can bring DD into battle. You can tell him to stay put, whistle for him to come back if he strays too far, and pet him whenever you want. 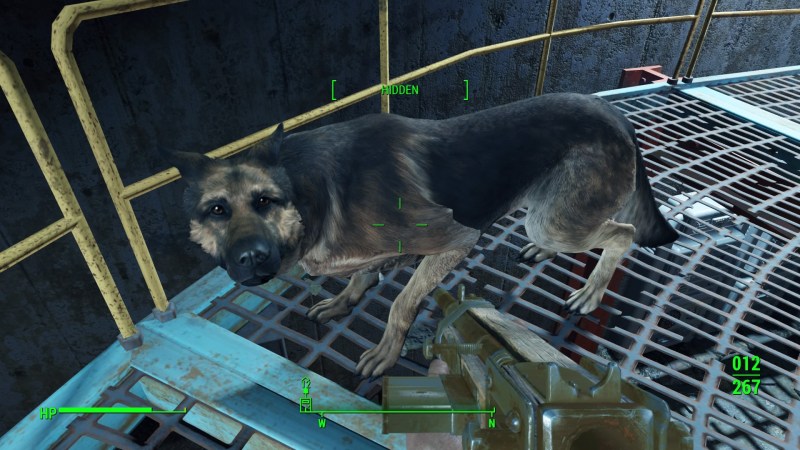 Above: Dogmeat knows when to stay quiet.

Some version of Dogmeat has been in every main Fallout game. In Fallout 4, you meet him at a gas station within the first few hours of playing. According to Mama Murphy, a character who has the power to see the future, Dogmeat is “his own man” and a “free spirit” who’s loyal to his friends.

You can’t pet Dogmeat, but you can talk to him and ask him to do tricks. The best part is figuring out which items he can interact with. I once gave him a teddy bear and he immediately thrashed it around with his teeth.

Which dog is more useful? 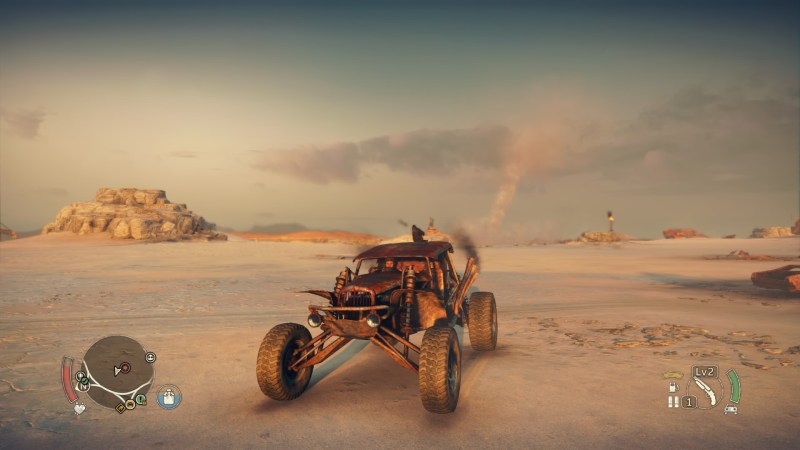 Above: Taking Dinki-Di out for a ride.

Max’s dog only serves one purpose: to help clear out minefields. Dinki-Di hangs out at the back of a dune buggy and barks loudly if you’re close to one of the explosive devices. The direction he faces tells you where the mine is in relation to your car. 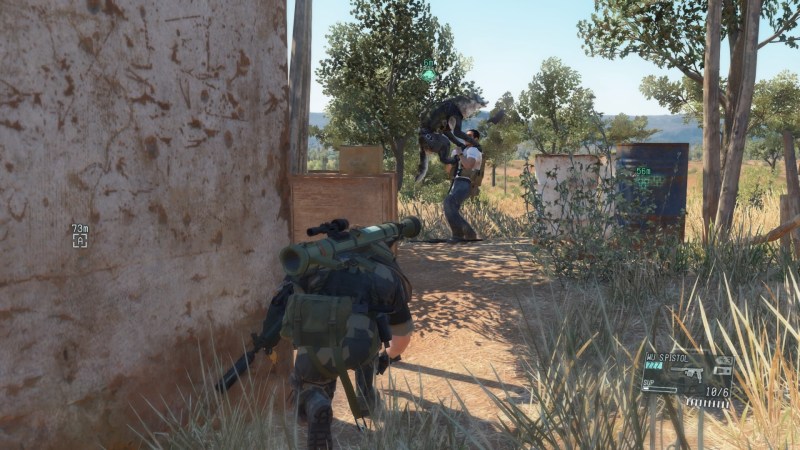 Despite all the technology in Snake’s arsenal, DD is one of his most powerful weapons. DD instantly places markers on nearby enemies, prisoners, and wild animals so you can track them more easily in the uneven terrain. When DD first joins you on missions, you can order him to distract guards while you go in for the kill. But the real fun begins when you start unlocking his equipment.

DD’s first uniform is a sneaking suit that comes with a knife, basically turning him into your silent killing machine. When you tell him to take care of someone for you, he pulls out the knife with his mouth, jumps on the bewildered enemy, and slices the person’s throat before backflipping to the ground. It never gets old. 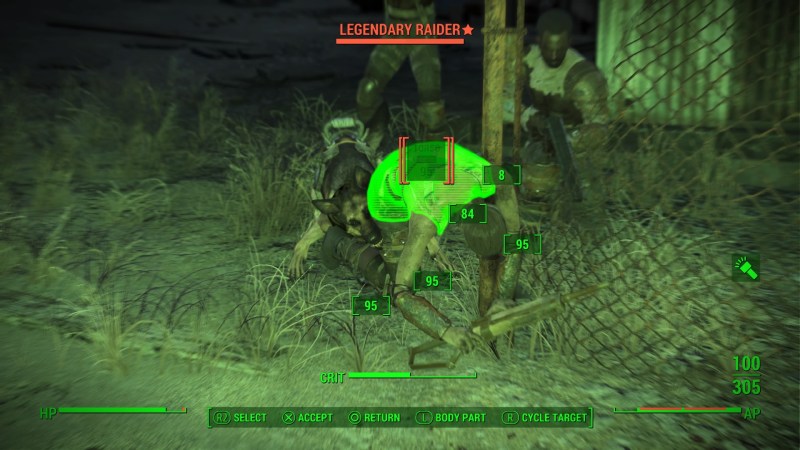 Above: Dogmeat gets an “A” for effort.

Dogmeat is horrible at fighting — the best he can do is distract someone for a few seconds before they inevitably kick him in the ribs. But he’s far more versatile than the other dogs. Dogmeat can look for enemies and fetch any ammo, weapons, or items you might’ve missed. You can make him wear any piece of dog armor you find, or just update his wardrobe with fashionable bandanas. And similar to Fallout 4’s other companions, you can offload heavy items into Dogmeat’s inventory by trading with him. 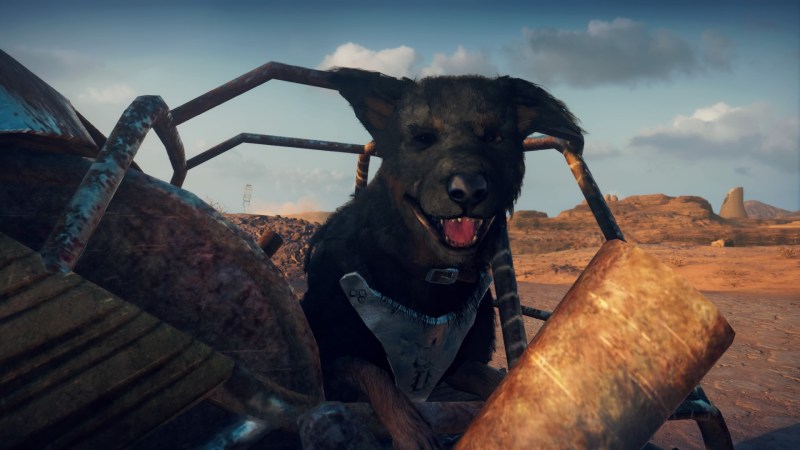 Above: Dinki-Di is too old for this shit.

Poor guy. In addition to being mostly useless, Dinki-Di has a face that only a mother could love. He’s a scruffy dog, with fur that seems oily and overgrown. And he always looks tired. I guess living with an insane warlord will do that to you. 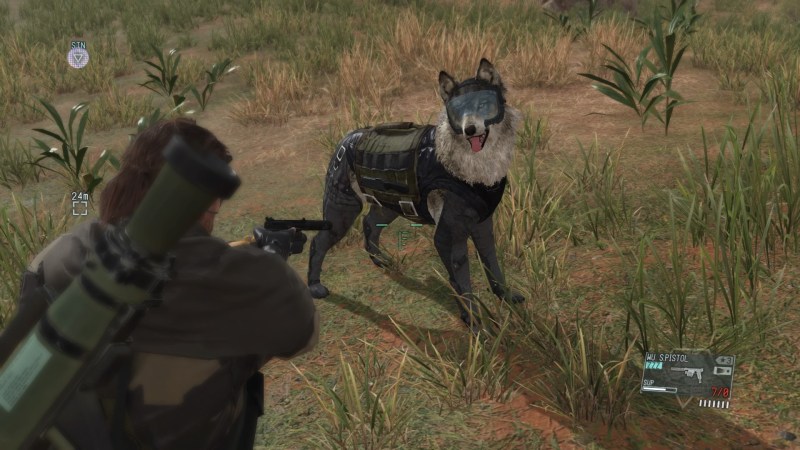 Above: DD’s out for blood.

DD sort of has an unfair advantage here because you actually get to see him grow up through adorable cutscenes. At one point, puppy DD attempts to jump into Snake’s helicopter because he wants to go on the next mission. But he wasn’t strong enough yet, and his paws could barely hold onto the ledge before he had to let go.

That scene happens again a few hours later when he’s much bigger (and rocks an eyepatch like his owner), and he makes the leap without any hassle. Even as an adult, DD will still run up to Snake and lick his face if he returns to Mother Base after a long absence. 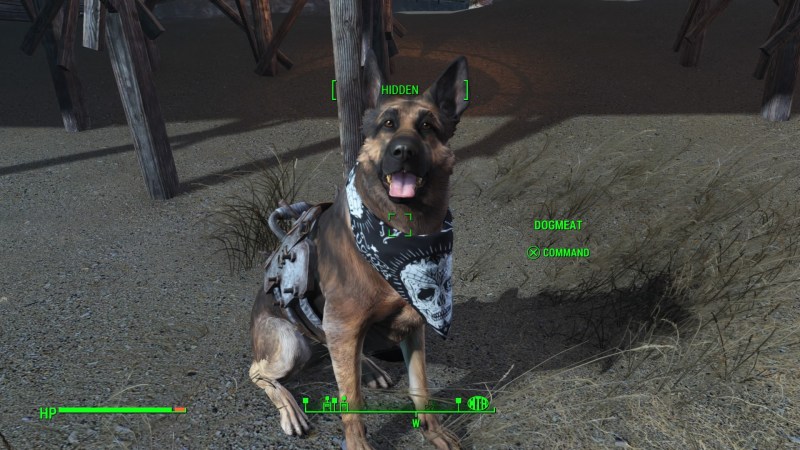 Above: The skull bandana looks good on him.

Dogmeat is the only pure creature living in Boston’s vile wasteland. He loves you unconditionally from the moment you meet him, and he doesn’t judge you like Fallout 4’s other companions do. Dogmeat is just happy to hang out with you and occasionally bite someone’s arm or leg if the situation calls for it. 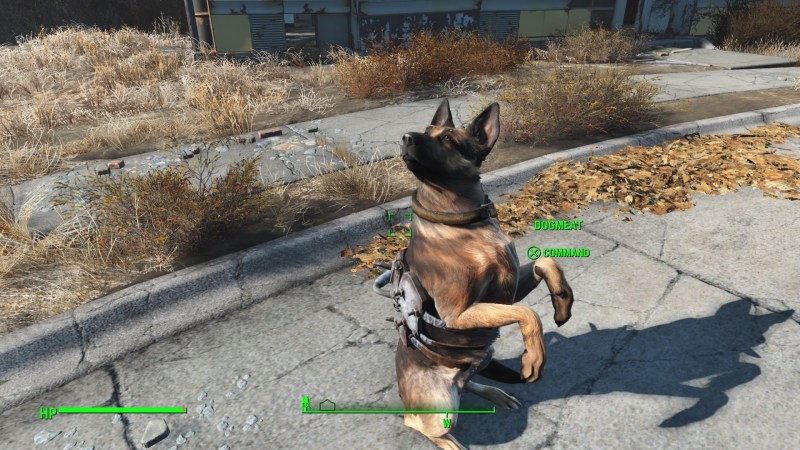 This was a tough one. DD is extremely loyal and precise. He won’t move unless you tell him to, which is the kind of partner you want in a stealth game like MGSV. But it’s the little things in Dogmeat’s behavior that make him more believable. He’ll sniff the ground and wander around on his own, but never so far that you lose track of him. Dogmeat is so attentive that sometimes he tilts his head to the side as if to say, “What’s up, dude?”

And no matter what you’re up against — be it a gang of Super Mutants or a terrifying Deathclaw — he’s always the first one to run into battle and give you a helping paw. Congrats, boy. You’ve earned it.