OK, it feels like we’re halfway there on GamesBeat’s march through the Electronic Entertainment Expo (E3). I’ve broken out the Motrin for the first time, and I almost nodded off in one of the presentations today. But I’m soldiering on to figure out the best games of E3. The show floor was insane today with 15,000 gamers added to the crowd. I cruised the floor a bit, but most of our analysis to date is based on watching seven major events staged by Electronic Arts, Microsoft, Bethesda, the PC Gaming Show, Ubisoft, Sony, and Nintendo.

Nintendo rounded out the big presentations today, and here’s more of our running commentary on what I think was the best. We’ve also got some indicators of what fans are loving on social from Facebook and Synthesio. If anyone “won” E3, I think it was Ubisoft for having the best combination of established titles such as Far Cry 5 and Assassin’s Creed with new intellectual properties like Mario + Rabbids Kingdom Battle and Skull & Bones. Sony had some heavy-duty firepower from Triple-A titles like God of War and Call of Duty: WWII, but it was very light on indie titles. Microsoft was weak on core games beyond Metro Exodus and Forza Motorsport, but it did show up with a new console, the Xbox One X. Microsoft backed off on virtual reality, but Sony is still supporting it in a big way.

Without further ado, here are the best announcements at E3 so far.

Even after decades, Nintendo keeps coming up with new ways to play Mario. Super Mario Odyssey debuts on the Nintendo Switch on October 27. And Nintendo showed Mario’s new power: the ability of possession. If Mario throws his hat on an enemy, he can take it over. This game is likely to be the biggest hit on the Switch this fall. Just how big is the question.

The 3DS lives. This action game is a 2.5-D exploration game for Nintendo’s last-generation handheld, and it is due out September 15.

Nintendo had an online-only event. But if it had an in-person audience, they probably would have gone bananas for this game. Nintendo didn’t share any details on gameplay or a launch date, but some fanboys are probably crying out there still. It’s not bad for a new platform, but Nintendo has to hope that ARMS and Splatoon 2 will carry the company until the fall.

Not much here was unexpected. But Nintendo did a good job covering its bases across its platforms. Among its other big titles were Rocket League for the Switch, Xenoblade Chronicles 2, an expansion for The Legend of Zelda: Breath of the Wild, and Pokémon for the Switch.

The story in this trailer was as compelling as the one from last year. In this case, you see more of the adventures of the Greek God of War in the land of the Norse gods and demons. And it turns out that his Norse son can understand some things from the Norse monsters that Kratos can’t.

Imagine that. A weak kid, the son of a god, can do something that his great father can’t. That gives them a reason to bond. That’s nice storytelling. Add to that some amazing graphics, incredible action, and some very fierce-looking boss fights. If Sony gets this right, it could be a powerful story with amazing gameplay.

It’s hard to tell if this is a small side story or something more epic. Is it just downloadable content?

Uncharted games are huge blockbusters with epic stories, and this one bears the Uncharted name with two female companions: Chloe Frazer and Nadine Ross, who both played smaller roles in previous Uncharted games. Sony chose to lead its event with this game of stealth, adventure, and combat. But it may be the only major internal Sony exclusive coming real soon, on August 22. I sure hope this turns out to be more than a simple side story.

Sledgehammer Games gave us the first glimpse of multiplayer play in cinematic form with Call of Duty: WWII.

You could see some of the multiplayer missions, such as taking the beach, driving through the bunkers, or protecting a tank on its path through a city. The action looks both realistic and over-the-top dramatic at the same time. I’m looking forward to getting my hands on this title to figure out how much of this trailer is really playable.

Days Gone captivated me last year with its dramatic demo of a bounty hunter, Deacon St. John, as he fruitlessly tried to escape from hordes of zombies known as Freakers. In the new trailer, we saw how he tries to help out a friend and gets into a heap of trouble.

He sets some clever traps to get rid of human enemies by getting the Freakers to go after them. But at the end of the trailer, he faces a freakin’ zombie bear. This year’s trailer wasn’t as compelling as last year’s, but it was still good storytelling.

Instead of closing with The Last of Us Part II, Sony chose to close with Insomniac’s The Amazing Spider-Man game, which showed extended cutscenes and demos of the world of Spider-Man and his city. It looks gorgeous and action-packed. I hope that slinging through the city is really as fun as it looks.

We saw plenty of other cool titles too, like the Shadow of the Colossus remake, Horizon Zero Dawn: The Frozen Wilds, Detroit: Become Human, Monster Hunter: World, and more.

Ubisoft got a lot of cheers at the start with the introduction of Mario + Rabbids Kingdom Battle. It was part adventure through the Mushroom Kingdom with Mario and Rabbids and part XCOM turn-based tactical combat game. That was a very unexpected mash-up, and it met Nintendo’s criteria of a Mario game that has never been done before.

Skull & Bones comes at a time when we’ve been awaiting Microsoft’s Sea of Thieves pirates game. But Ubisoft is a natural to make this game since it did such a good job with the pirate battles in 2013’s Assassin’s Creed IV: Black Flag. Something tells me this more realistic, team-based, player-versus-player live service game could very well carve out a niche in the pirate space.

Ubisoft Montreal showed gameplay for this version of Far Cry set in the American heartland, where you have to take on a doomsday cult that has taken over Hope County, Montana.

You can get help by winning over friends, such as a crop duster who can bomb the cultists, a sniper who can provide cover, and a dog that can take out enemies in stealth. The companions, dubbed Guns For Hire, really show that this is a Far Cry game, even with the fascinating story.

You know things are emotional when a developer starts tearing up on stage. That happened with the introduction of a game that many thought had already been canceled.

Ubisoft announced the sequel to Beyond Good & Evil way back in 2008, but it disappeared. Now Ubisoft showed a slick trailer with a monkey and a woman escaping in a comical way through the landscape of a futuristic city as they’re being chased by an army of high-tech authorities. But it didn’t really matter what they showed in the trailer. Beyond Good & Evil 2 has some serious pent-up demand for players who last played the original title back in 2003.

Microsoft showed that it cared about the PC game business by announcing a better version of Age of Empires, 20 years after the original game debuted. Hopefully, Microsoft can take the next step and create a new entry in the series.

GamesBeat’s Mike Minotti, a big fan of Kingdom Hearts, was asleep at the time, but Square Enix finally showed its progress on Kingdom Hearts III, the latest mashup of Disney and Final Fantasy characters. It’s been in the works for four years, and the new game will feature plenty of action.

EA showed off the gameplay of Star Wars: Battlefront II’s multiplayer, and we got to play a couple of sessions.

It proved to be surprisingly accessible and fun, as you can earn enough points in a match to become a hero or villain, like Darth Maul.  Star Wars: Battlefront II launches on November 17 on the PlayStation 4, Xbox One, and PC.

A Way Out, the new EA Originals game from Hazelight

Josef Fares is one of the creators of Brothers: A Tale of Two Sons. Now funded by EA, his Hazelight studio showed a first look at A Way Out, a creative co-op game where you control one of two characters who must escape from a prison and evade capture.

The game moves seamlessly from full-screen cinematics to split-screen gameplay as you escape the prison, rob a gas station, or escape from a hospital. Fares says you’ll like it, or you can break his legs.

EA’s BioWare is investing heavily in a secret game, and now we know it’s a new science-fiction third-person shooter. It has a Destiny-like feeling of a shared world. The facial animations look great and it looks like fun to fly around with a jet pack.

We all knew the Xbox One X was coming, but Microsoft finally confirmed its price and launch date. It’s going to be the most powerful game console ever launched, with 6 teraflops of processing power.

Now you can go stealth in the Nile River and ambush alligators or Egyptian soldiers alike. The world looks gorgeous in 4K, and it runs smoothly and seamlessly. We’ve got some more coverage of this game today.

Original Xbox titles will get the backward-compatible treatment 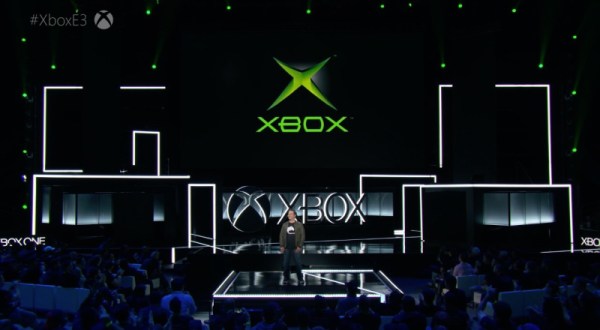 Now you can play your original Xbox games on the Xbox One S and Xbox One X.

Hilariously, you’ll be able to board other ships by shooting yourself out of a cannon and flying over to land on the enemy’s deck. Sea of Thieves is going to give us a lot of laughs as we venture out onto the high seas as pirates.

Other notable reveals included Forza Motorsport 7, Metro: Exodus, Ori and the Will of the Wisps, Life is Strange: Before the Storm, Shadow of War, and Crackdown 3.

The trailer for Wolfenstein II: The New Colossus was as well done as any, showing what an alternative universe would be like if the Nazis won World War II and took over the United States. It’s a creepy idea full of creepy enemies and monsters from Nazi experiments. It’s coming out on October 27 for PlayStation 4, Xbox One, and PC.

Talk about creepy. The Evil Within was high on both creativity and grotesque horror, and the sequel shows that it will carry on with that.

The Evil Within 2 captures your morbid curiosity about the nightmarish imagery at the same time it repulses you. For horror fans, it may be just what the creepy doctor ordered. It is coming out for PlayStation 4, Xbox One, and PC.

Bethesda’s lawyers may be at war with Facebook’s Oculus VR division, but that doesn’t mean the company doesn’t support virtual reality.

Both Doom and Fallout are getting the VR treatment, and they will immerse players in some very realistic-looking worlds. While Microsoft didn’t show off its VR headset, Bethesda’s support for VR shows the new platform is moving forward.