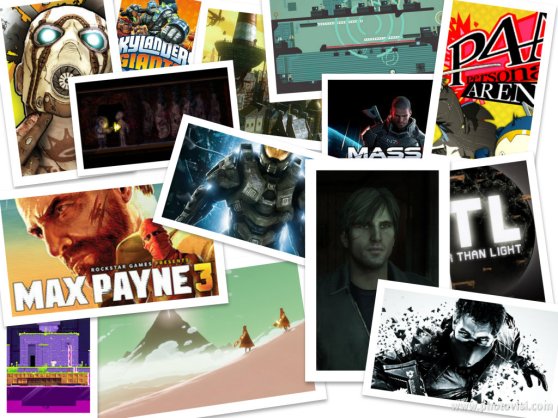 This was an outstanding year for video game music. Professional musicians from various genres all contributed pieces to very unusual places, and many up-and-coming indie composers stole our hearts with their emotional scores. In fact, it’s pretty difficult to find a game with a bad soundtrack these days.

Below is GamesBeat’s choices for the best soundtracks of 2012. It’s an eclectic mix of indie, dubstep, and classical composition that aptly reflects this year’s dynamic music scene.

But because this was such a big year for soundtracks, we also have a few honorable mentions, so be sure to check those out, too.

The Best Video Game Soundtracks of 2012

Few songs are quite as lingering as “Tears” on the Max Payne 3 soundtrack. “Tears” lingered in the background of numerous commercials for the game, often playing while the down-and-out protagonist walked away from explosions. It’s an apt summation of the game’s sound and inspires thoughts of edgy spy dramas and sweaty action flicks.

Pairing “Tears” with other tracks from the album like 9 Circulos and Combat Drugs, the Max Payne 3 soundtrack expertly sets the scene of a scumbag ex-cop doing bad things in South America.

Mass Effect has always had a clean, space-age feel to its music, and Mass Effect 3 takes that to a new level. None of its music is overly bombastic, but you do feel a sense of urgency throughout. Melodic, determined pieces inspire us to take in-game decisions very seriously, and you can definitely feel the weight of your choices hanging in the air around you while listening to this score.

Lorne Balfe’s most notable compositions feature prominently in splashy action films like Pirates of the Caribbean: Dead Man’s Chest and Inception, but his transition to video games is where he really shines. Balfe scored both Skylanders games, but Giants is where his whimsical style really comes to life. Skylanders Giants owes its jaunty atmosphere to Balfe’s music, and it feels like a proper epic adventure because of it.

Is it possible to feel space? FTL is about exploration and space combat that’s also fiendishly difficult. Ben Prunty’s soundtrack amplifies the vastness and danger of space with spangly synth sounds that make you feel like you’re floating among the stars.

It’s also fantastic listening to both the exploration and battle variants of each song in the game. Afterward, you can also feel the expert sound mixing as you play FTL.

Borderlands 2 is a space Western, and its mix of airy, sometimes-mechanical tones bring that concept alive. While you scour Pandora for crazier weapons and combat ruthless enemies, the soundtrack is always there, sending out tension tendrils every time you trigger a fight or find a cool location.

Borderlands 2 actually shares two composers with Mass Effect 3, something that isn’t too surprising when you listen to the game’s more action-oriented songs. Velasco and Dikiciyan are masters of incidental tension.

Silent Hill composer and creator Akira Yamaoka was on to something when he joined swirling, dreamy guitar sounds with metallic clangs. Lone Survivor’s soundtrack flirts with harsh, chaotic tones while wrapping the game in a melancholy melody. Listening to this soundtrack brings back very powerful Silent Hill memories, and it’s nice to hear that sound live on. The spooky score will unnerve you as you explore Lone Survivor’s gloomy environment.

Few games have soundtracks as passionate as the Halo series. I liken them to Disney films such as The Lion King and Beauty and the Beast for the emotional depth in the music alone. Halo doesn’t have discernible lyrics, but it inspires a wide spectrum of feelings. Halo 4 does this more competently than Halo 3 while sprinkling in a fair amount of easily dubstepped beats.

You should feel elated during some scenes in Halo 4, as well as very tense. This isn’t just because of the gameplay, but because the soundtrack plays well with the scenery to deepen your experience.

Fez’s soundtrack is a twinkly adventure all on its own, but pairing this with its sometime mind-bending gameplay creates a nostalgic feeling. Disasterpiece’s sound is best described as 8-bit epic and manipulates a similar electronic sound as Angelo Badalamenti’s work for the early ’90s TV cult hit Twin Peaks.

Fez’s score is inexplicably haunting at times, and many tracks would be just as effective if you played them over stock footage from an old lumber mill and a massive water fall.

2. Sound Shapes
Composers: I Am A Robot and Proud, Beck, Deadmau5, Jim Guthrie

Sound Shapes hit the pinnacle for interactive music. As you guide your musical blob through increasingly treacherous landscapes, your actions build the various parts of the song playing in the background. Building music as you play is an addictive holdover from rhythm games like Rez that works as you leap from precarious ledge to precarious ledge while avoiding baddies that want nothing more than to stop the music.

Game soundtracks exist to heighten emotion in any given scene. In Journey, Wintory’s music is often our only companion, a score drifting delicately on the breeze waving the character’s scarf. While sometimes mournful, Journey’s score urges us to embark on an epic quest fraught with danger and sometimes crushing loneliness.

Journey’s soundtrack is absolutely the most emotional and beautifully composed score for any game in 2012, and Austin Wintory definitely deserved the Grammy nomination he earned.

4. Silent Hill: Downpour
Can Silent Hill ever be the same without Akira Yamaoka’s soundtracks? Downpour does an excellent job standing apart from Yamaoka’s signature style while still invoking the disjointed musical universe surrounding the Silent Hill series. The only thing it’s missing is a song with Mary Elizabeth McGlynn on vocals.

3. Gravity Rush
If you’ve ever wondered what anime soundtracks influenced by French street music sprinkled with a dash of Star Wars composer John Williams sounds like, look no further than Gravity Rush. Each track amplifies its sometimes manic flying and world-bending platforming.

2. Persona 4 Arena
Most of the music in Persona 4 Arena first appeared in the PlayStation 2 role-playing game Persona 4, but that doesn’t make it any less awesome in 2012. Shoji Meguro’s score is incredibly energetic, lending itself perfectly to a fighting title.

1. Syndicate
Cyberpunk was once completely composed by Greek electronic and ambient musician Vangelis in my mind, but dubstep is taking over. Dubstep pioneer Skrillex’s contribution to Syndicate’s soundtrack is probably one of the most face-smashing sounds in 2012, but the rest of the music feels very inspired by it. If you want to feel like ripping out someone’s neural implant, I suggest taking Syndicate for a spin.