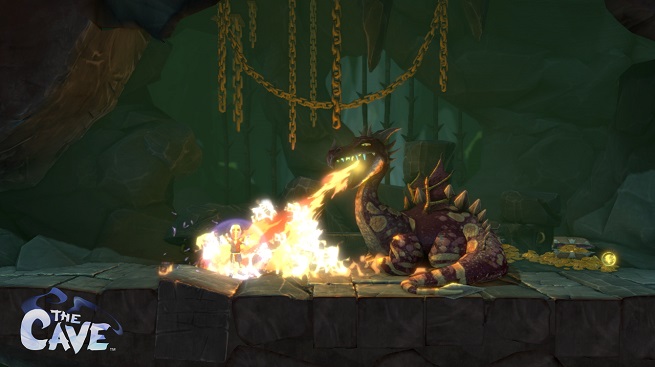 What if a magical talking cave could grant you your heart’s desire? Would you brave its mysterious, smooth-talking depths? What would you be willing to do to get what you want? If you’re one of the seven characters in Double Fine Production’s The Cave, the answer is “steal, murder, and betray.” And not necessarily in that order.

Part point-and-click adventure and part platformer, The Cave is the latest project from The Secret of Monkey Island and Maniac Mansion designer Ron Gilbert. After choosing three of the seven player characters, you descend into the eponymous cavern to test your wits against devious puzzles, colorful crackpots, and fearsome beasts in a quest that manages to charm despite its flaws.

The Cave is the undeniable star of the game. With his (yes, it’s a he) silky radio announcer voice and penchant for sarcasm, he serves as humorous narrator during your journey. While not quite laugh-out-loud funny, I looked forward to his comments, especially after a long stretch of quiet puzzle-solving with the silent protagonists.

The Cave’s personality extends to its visuals as well. As you venture further into his subterranean depths, you come across a carnival, a medieval castle — even a nuclear missile silo — depending on which characters you choose to take along. Each area has its share of sight gags, as well as the occasional Easter egg. Longtime LucasArts fans, be on the lookout for a certain leafy mainstay!

The Cave is fairly lengthy for a downloadable title. It’ll take three playthroughs to experience all seven characters’ stories, each one taking a good 6 hours to 8 hours to complete depending on how quickly you can solve the puzzles. Most of them are pretty logical, and you can figure them out with a bit of experimentation and exploration. But a few can be a bit more challenging. One puzzle involving a mine cart stumped me so much I desperately turned to other reviewers on Twitter for help (thanks @adanzis!). But despite that one moment of frustration, I found the puzzles enjoyable. I just wish I could say the same about the characters.

The story (or lack thereof)

If you’re the type of gamer who expects a long, enthralling narrative with vivid characters, heed this warning: The Cave might disappoint. The cast here is practically a cipher, a group of nameless archetypes with precious little backstory. What back stories they do have are told through collectible cave paintings. This makes it difficult to empathize with their quest or cheer them on, especially when you realize what murderous, backstabbing bastards they all are.

Amusingly macabre in an Addams Family sort of way, The Cave is nevertheless a morality tale without the moral, unless that moral is “bad people do bad things to get what they want and get away with it.” Every time a character escaped the cave with their desired prize in hand, I waited for an O’Henry-style comeuppance that never really came, and each time it felt like a wasted storytelling opportunity.

At one point, I wondered if I could accomplish my goals without resorting to murder. “Maybe next time you’ll make the right decision,” the Cave teases during its closing moments. But if that “right” choice exists, I never found it. Again, it felt like a wasted opportunity.

Inventories in adventure games have gotten out of control in the last 20 years, according to Gilbert. To combat this, he decided to streamline the idea of inventory in The Cave. Instead of having bottomless pockets filled with tchotchkes, each character can only carry one item at a time. This can sometimes lead to a fair amount of backtracking. You can travel an entire map with a damaged can of corn, only to find out it’s useless and the item you really needed is back toward the start of the area. It’s a minor annoyance, but it’s noticeable, especially when you’re trying to remember where you left your shovel.

Although it’s not as funny as past Ron Gilbert games, The Cave still manages to charm through its visuals and honey-tongued narrator, but it falls flat when it comes to storytelling. Double Fine fans looking for a light diversion while waiting for their Kickstarter project, however, could do worse.

The Cave is available on the PlayStation Network and the Nintendo eShop on Wii U for $14.99. It will be available on Jan. 23 on Xbox Live Arcade for 1,200 MSP, and on Steam for $14.99 (PC, Mac, Linux). The publisher provided GamesBeat with a Xbox 360 download code for the purpose of this review.