Uncharted 4: A Thief’s End is one of the greatest video games of all time. It wraps up the four-part adventures of Nathan Drake, the light-hearted adventurer who started as a Lara Croft clone and became something much bigger. Naughty Dog, the game’s developer, gave Sony’s its biggest exclusive on the PlayStation 4 and a huge stick against rivals in the console wars. Like the inscription on Drake’s ring says, “Sic Parvis Magna: greatness, from small beginnings.”

Uncharted 4 gave us so many spectacular scenes, or Hollywood-style set pieces, like Nathan Drake hanging by a rope attached to a truck that is speeding over a bridge. It also gave us some of the most memorable characters in game history, including Nathan; his on-again, off-again love Elena; elder thief Victor “Sully” Sullivan; and the new character in Uncharted 4, Nathan’s lost older brother Sam. A very large chunk of the Sony PlayStation 4 player base is enjoying this exclusive Sony game as the title sold more than 2.7 million units in its first week alone, starting on May 10. The whole Uncharted series has sold more than 23 million copies to date.

This interview has spoilers about many different scenes in Uncharted 4, including the ending –Ed.

We had so many questions after playing the full game, and we were able to get them answered in a rare, hour-long interview with the game’s co-directors, Bruce Straley and Neil Druckmann, at developer Naughty Dog’s headquarters in Santa Monica, Calif. And they didn’t hold anything back. This was, after all, their last chance to make a full Uncharted game and to talk about why they made the decisions they did in shaping the story and the gameplay.

We have to warn you again that this interview dwells on spoilers. We learned a lot of things from Straley and Druckmann, who were also the co-creators of Naughty Dog’s The Last of Us.

If you’d prefer to read it in parts, here’s the links on saying goodbye to Uncharted, advice for game developers, making games over movies, Naughty Dog’s headquarters, the ending discussion, and the Monkey Island Easter egg. 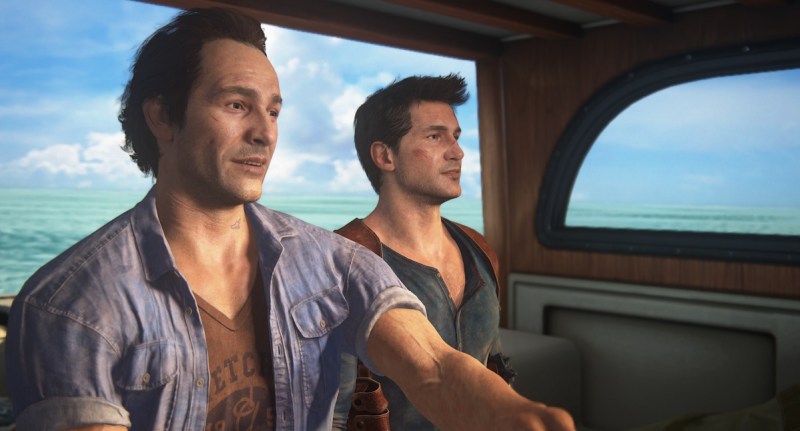 GamesBeat: How do you recharge your batteries to be creative again?

Neil Druckmann: I travel. But then I’m needing more time to have a vacation from my vacation, so I’m going to stay at home and paint. Bake bread.

Druckmann: Art. Things to take me away, keep me focused on something other than me.

Bruce Straley: Spend time with the kids, family. Build Legos. I picked that hobby back up. Watch a lot of My Little Pony. And then just read books, watch movies, go hiking.

GamesBeat: It’s always an interesting subject. How do people who are very creative stay creative? Mike Minotti wanted to ask you, first, how did you come up with the Monkey Island reference?

Druckmann: That’s me. I’m a big Monkey Island fan. When there was an opportunity to do it, I asked one of the concept artists to do it. I thought I would just sneak it in there, and then word got out that it was in the game. Then HR came up to me and said we had to get permission for it. We couldn’t leave it in the game. So I thought, dammit, Disney will make us take it out. But we reached out to Disney and they actually said they were flattered, so we could go for it. That was pretty cool.

Straley: No! Same thing, just pure luck of the draw. The right people and the right timing.

Druckmann: Initially we got a no. We were working on a different old-school game of our own. Crash is kind of our own, but—then, somehow, negotiations went on up high and we got the yes.

GamesBeat: It turned out to be a nice scene, I thought. It was fun to come back to it. I like how you guys have these things you throw back to. Is that often part of the storytelling you like to do?

Druckmann: Last of Us and Uncharted 4, there are lots of parallels and imagery about starting and ending. It helps to reflect back on where you were and see things in a similar setting. Now they’re different. Now they’ve changed. 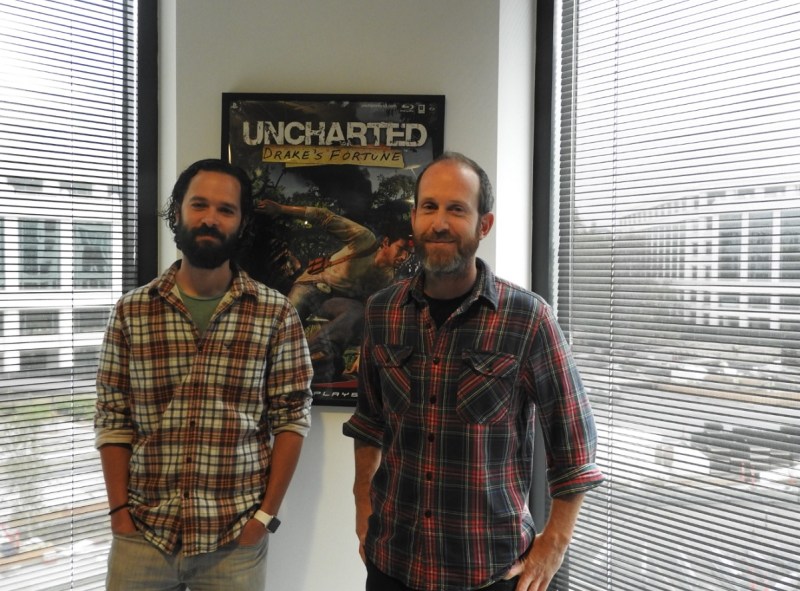 GamesBeat: I thought about Last of Us that way. There’s the very beginning and the very end, and they resonate together.

Druckmann: Yeah. They had that mirror structure.

GamesBeat: The ending was interesting. I have a three-paragraph question here, but I’ll read the first part first and give you a moment to start with it.

I thought, given the path you chose, the ending was good, but it was entirely different from what I thought it was going to be. I took my clues from the title. The way Uncharted 3 also started out with Nathan and Sully getting shot and thinking about, okay, there’s some kind of loss that may happen here. I felt like I was set up for that story. But was I, really?

Druckmann: A Thief’s End can mean a lot of things. I guess there’s something possibly misleading there. In interviews and the way we constructed trailers and the tone of it, we were definitely trying to throw people off. It was important that you felt like that was at stake as you played the game. It’s possible someone could lose their life, even if ultimately they don’t. So hopefully it was subverted in an interesting way and you were intrigued that it didn’t happen. But we still wanted you to think that it could happen.

GamesBeat: Do you think that also not having a loss at the end is sort of consistent with this franchise? That this is the way, from beginning to end — this has always been just more fun and adventurous, maybe not as serious? That was some of my thinking as to why it turned out this way. Compared to The Last of Us, again, there’s the powerful scene in the beginning with the loss of a character, and it resonates with the emotionally lasting ending.

I was very fearful while I was playing the game. I had this overwhelming fear that somebody’s going to die here. I put my logical money on Sam, I guess, because he was not constructed as a crowd-pleasing character. He has so many flaws that you just have to wonder about him. Anyway, that was some of my reaction. I wonder if a tragic ending was ever something you considered? Or were you aiming for this ending from the very beginning? 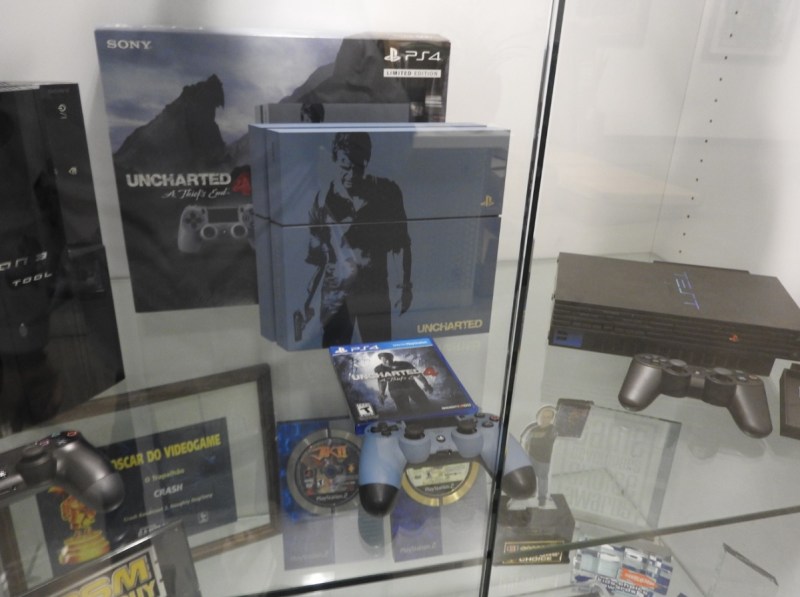 Above: A display for Uncharted 4 at Naughty Dog’s headquarters.

Druckmann: From the very beginning, this was the ending we constructed. It was about the conflict between a man and the passion that becomes a sort of obsession in his life. The woman he loves, the family that he’s formed and that he loves, and the fact that he can’t reconcile those two things. A relationship is about compromise sometimes. He’s given up a part of himself. Elena has given up a part of herself. But what they’ve constructed at the end is greater than what they’ve given up.

Straley: I also feel like a death of a main character in video games or any kind of media right now is, for me personally, almost cheap. It’s not that we’re trying to stay true to something in the franchise as much as it didn’t feel right for us. There was some other resolution we were getting at. I liked when A Thief’s End, the title, came up as a proposal. It was perfect because of the multiple meanings that people could read into it.

Druckmann: This doesn’t just apply to Nate. It applies to Henry, to Thomas, to Rafe.

Straley: It’s also a metaphor. It’s the end of a thief’s lifestyle. A thief in his behavior, Nathan Drake’s behavior. I like the fact that it still has absolute meaning for the game. It’s just misleading in a fun way.

I also liked, when we were watching playtests—we have cameras and a little picture-in-picture of the players. When they would go into Henry Avery’s ship to fight Rafe, as soon as the fight starts there’s a fire going and gold all around. You’d hear people say, “Oh, shit, is this when it’s going to happen?” You’d see them double down on wanting to win the fight. They’re more engaged in not letting that happen. I liked that. I liked the fact that there was that possibility hanging out there, that we are proposing some thief’s end. It added a bit more investment, honestly, near the end of the game.

Druckmann: In regards to Sam, ultimately his love for his brother is what saves him. That’s the thing that Rafe, who’s a sort of reflection of Nate – representing Nate’s ego – he doesn’t have that. What he does to Nadine, he doesn’t have that person that’s going to save him at the end. That’s his undoing.

GamesBeat: Do you feel like, in this way, this is a contrast to The Last of Us? You can have a story that’s darker in The Last of Us, whereas in Uncharted there’s more brightness to it.

Druckmann: It’s a different challenge. The world of Last of Us affords more drama and tragedy, things that are more easily seen as weighty. This is a more lighthearted pulp action-adventure. The challenge we gave ourselves was, how do we tell a meaningful human story with complex relationships, complex characters, in this more lighthearted drama?