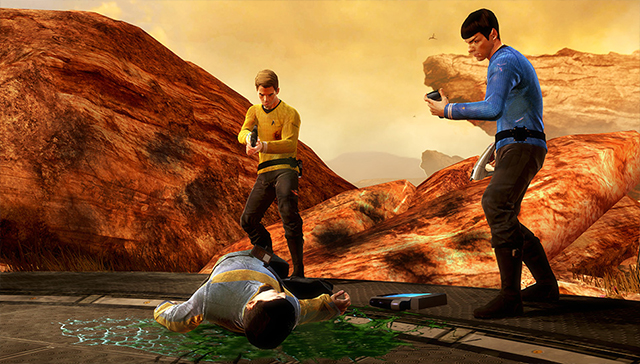 Captain’s log. Stardate 5514. The U.S.S. Enterprise has come upon a strange relic from Earth’s past: Some archaic form of digital entertainment entitled “Star Trek.” According to our computer’s database, this was a “video game” of the third-person shooter genre, released back in April 23, 2013 for personal computers and two strange devices called the Xbox 360 and PlayStation 3.

To better understand our history, I have assigned my crew to run a series of experiments on this … thing. What follows are the reports from my officers as they plodded through, struggled with, and eventually conquered this challenge. We have come one step closer to understanding our human ancestors.

And their questionable tastes.

Captain, it’s almost hard to believe, but we appear as the characters of this simulation. Well, almost. We’re all here by name, but we look different. Younger, shinier, and sexier! It’s like someone made a play about our lives, but all the roles were recast.

But I have to admit, captain, this digital adventure did intrigue me. The plot reminded me of our own missions, just with a lot more shooting and explosions. Perhaps it wasn’t as exciting as some of our more prolific expeditions, but this was a tale of similar sensibilities. 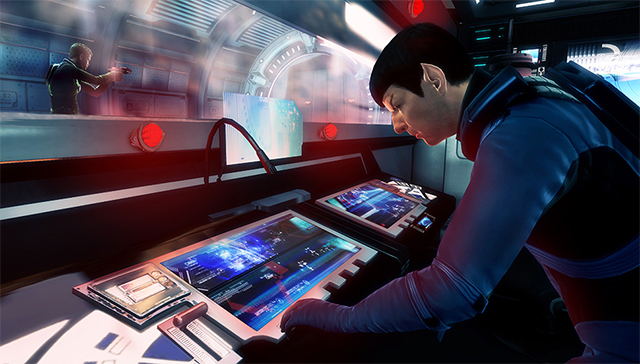 The captain assigned me to experiment the cooperative action with Lt. Sulu. I controlled the awatar that resembled Commander Spock while Sulu directed the Captain Kirk character.

I feel running the experiment with Sulu was far more productive than it would have indiwidually. Much like the great, Russain-invented game of hockey, it was possible for us to do well enough on our own, but we succeeded much more easily when working together. Many cooperative scenarios forced us to engage in countless mundane tasks like opening doors together. However, other situations were much more adwenturous, like a segment where we used transporter guns to beam each other around warious obstacles.

Also, while the simulation presented us with countless “hacking” scenarios that were as fulfilling as watered-down wodka, a cooperative wariant on hacking was much more interesting, forcing both of us to match computer wave lengths by redirecting the left directional input dewice.

Captain, it’s … music! Beautiful, exciting music! It sounds like a style of accompaniment usually used for theatrical movies from Earth’s 20th and 21st centuries. Also, while the voices projecting out of these characters sound nothing like our own, I do find them to seem strangely authentic. Sometimes the dialogue can even be quite charming, especially between the Spock and Kirk characters. I must admit that I giggled when the Spock avatar sat in the captain’s chair, prompting Kirk to quip, “Don’t get too comfortable.” 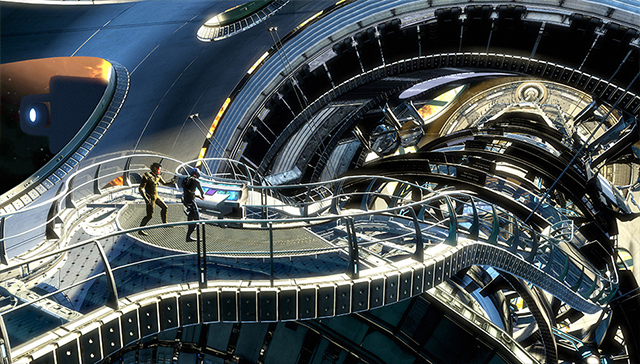 Jim, I’ve seen some ugly sights in my day. Hell, I once accidentally walked in on Spock using the public sonic shower. But this …”game”? Damn it, Jim! It’s about as disgusting as a Tellarite honeymoon.

I think whoever made this thing wanted these characters to represent humanoid lifeforms, but they’re all discombobulated! Faces looks squished together, mouths awkwardly open and close like a nutcracker, and they just don’t act natural! Hell, once my avatar slid halfway across the floor on his knees when I was trying to get him to go down a ladder.

These projections just disobey the law the physics. Often their body parts just pass through anything around them. Walls, weapons, other people — anything! I can’t make heads or tails of it.

But even without these technical blemishes, this girl isn’t going to win any beauty pageants any time soon. Every environment looks the same, either the clean, white corridors of the Federation areas or the brown, rocky locales of the Gorn. Damn it, I wasn’t expecting to see all the colors of Risa, but a little variation in pigment would have gone a long way.

Captain, in order to better understand this specimen, I have examined over 200 other examples of “shooting video games.” It appears that Star Trek offers no new ideas, instead opting to replicate mechanics and experiences from other simulations, often with a lack of finesse usually seen in its contemporaries. Most of the “entertainment” involves ducking behind cover and shooting aliens, a task that quickly becomes mundane.

And while Ensign Chekov remarked that he enjoyed his cooperative experiments with Lt. Sulu, I opted to perform my examinations singularly. I can tell you, Captain, that I found neither enjoyment or amusement.

Captain’s log. After carefully reviewing the reports of my crew, it seems that Star Trek is an unoriginal example of an archaic form of entertainment. It appears that only those with bizarre, intense fantasies of being Mr. Spock or myself would get any enjoyment out of the experience, and even then only if they have a partner to share the experiment with.

Mr. Spock has informed me that it was customary to conclude analysis on simulations of this sort with a numerical score. It seems like an inefficient way to remark on the quality of entertainment, but we will follow suit in the spirit of tradition.

Star Trek is out now for the Xbox 360, PlayStation 3, and PC. The publisher provided GamesBeat with two copies of the 360 version game for the purposes of this review.