Then I played it last Friday night. And twice last Saturday. And twice last Sunday. And every night since. And now, nearly 16 hours later, I get it. Loop Hero is like a good coffee blend: It highlights the flavors of each bean (or in this case, genre).

It’s a roguelite in how it uses procedurally generated maps and how when your character dies, you carry some progression along (in this case, the resources you earn and bring back to your camp). It’s a deck-builder in how you set up terrain for your map loop. It’s like a city-builder in how you build your camp. It’s like an idle game in how you character fights monsters. And it’s an RPG in how you build it all together as you unlock classes, juggle numbers for your gear, improve your camp, and so on.

It’s a fascinating mix, and I find myself discovering something new about it each time I play (in one recent run, I learned how to make valuable Count Lands). Each loop is different, and I’m figuring out the builds that work for me best (note — I doubt these are the best or even decently optimized builds, but they work for me).

And so are a half-million of you, as Devolver said Thursday that folks have bought 500,000 copies of Loop Hero a week into launch, making this a hit for the Russian indie studio Four Quarters.

One aspect of Loop Hero I’ve been enjoying is how well elements from idle and strategy games stand out. As your hero walks around the loop, they fight monsters. You can’t control these combats, but you do influence them by how you place monster-generating terrain (this reminds me of the monster generators in Gauntlet!) and what gear you equip.

“We were talking about making a ‘zero-player-game’ and our artist, Deceiver, came up with a concept for a game where the hero would walk in loop, fighting everything on his own, and the player has to put various problems in his way, but balancing everything so that the hero could handle them and become stronger,” Four Quarters’ Aleksandr “blinch” Goreslavets said over email. “Everything else came later.”

And at least for me, it hits on that sense of relaxation I get from playing an idle game … or something like Baldur’s Gate or Civilization, whose warm embraces fit any mood I’m in. I wondered if this was part of the intent behind Loop Hero. 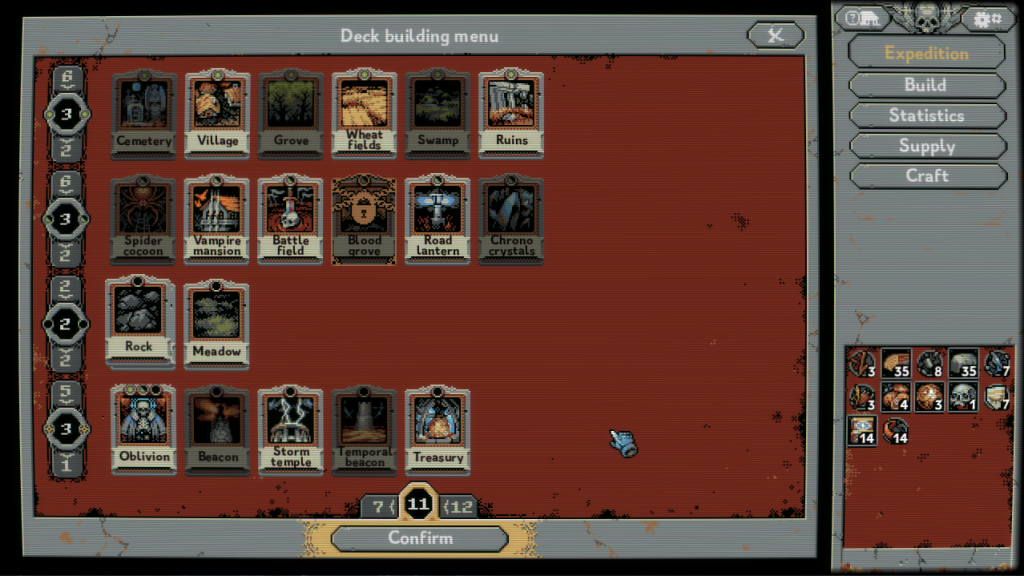 Above: This is the first deck that got me my first two victories against the Lich.

“Loop Hero can be played in many different ways, and that’s by design. Players can take their time, build loops with a small number of enemies, set the speed 1x, and just relax,” Goreslavets said. “But they can also try to call a boss as early as possible and have their loop end up looking like a party in Hell! The challenge is certainly there for players that want to jump in at the deep end!”

Part of this relaxation also comes from placing tiles outside the loop. Throwing those mountains, rocks, and meadows on the map helps you with every placement, and there’s a strategic layer there if you go for peaks, blooming meadows, getting the most out of treasuries, and more.

“Placing tiles outside the loop was a pretty obvious decision from a gameplay perspective, but we tried to make sure that doing so opened up the possibility of complex strategies and space for interesting experiments,” Goreslavets said.

My favorite aspect of Loop Here is the sense of discovery. I’m not looking at guides or forum posts for guidance; I’m just doing my best to figure it out. The first time I placed 10 pieces of rock of mountain, my eyes went agog when this spawned a goblin camp! Villages heal your hero, so of course I figured it’d be smart to put two of these together in the middle of a loop. Surprise — I have bandits now!

Discovery is something Goreslavets said Four Quarters was going for.

“In fact, this is one of the main elements of the game,” he said. “In an attempt to discover new combinations, the player tries new strategies and notices new gameplay details. We tried to make the player feel like a pioneer that finds everything out for themselves, and not just ‘follow the green arrow,’ so to speak. The game also has a couple of truly hidden secrets that will make you smile if you find them.” 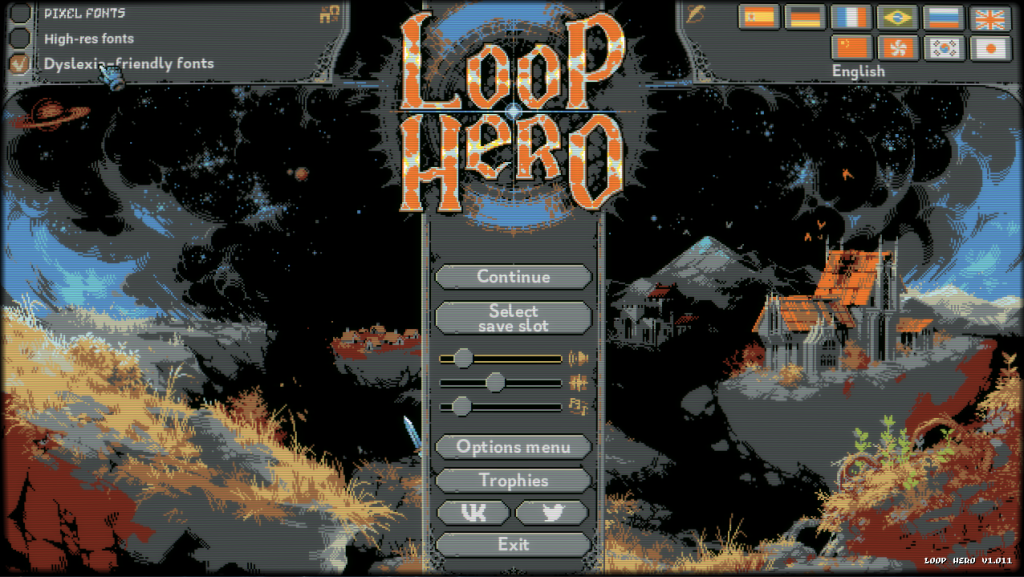 Above: Loot Hero has an font option for dyslexic players … or those who just want readable fonts.

And while I’m not dyslexic, I really dig how Four Quarters makes it easy and obvious how to switch over to dyslexic-friendly fonts. The option is right in the top-left corner on the start screen. Turns out this comes from feedback that someone on Twitter gave the team that the pixelated font was hard to read in the first trailer for someone with dyslexia.

“We had already thought about adding a ‘hi-res’ font, and when asked about one more, we thought, ‘Of course, why not, if it helps someone,'” he said. “In the future we want to add a couple more settings to improve the readability of the text.”

And considering what an engaging game Loop Hero can be, making it easier for others to play should also make it easier to sell more copies.

In the meantime, I’m going to figure out how to get beyond 10 loops without dying with a rogue.

Dungeon Maker of the Magister

Solasta: Crown of the Magister‘s early access is coming along. This turn-based RPG released part of Act 2, and it’s preparing its spring update, which brings along a dungeon maker tool.

Tactical Adventures gave me a look at it a couple of weeks ago, and this tool looks cool. The creator is a bit limited right now when it comes to dungeon environments and the items you can put into it, but I do see a great deal of potential here.

Right now, you can make a dungeon with 20 levels in it. That’s a mega-dungeon, my favorite kind to explore. But what’s cool is that you don’t have to make all 20 levels. Friends can make other levels. One map links to another. 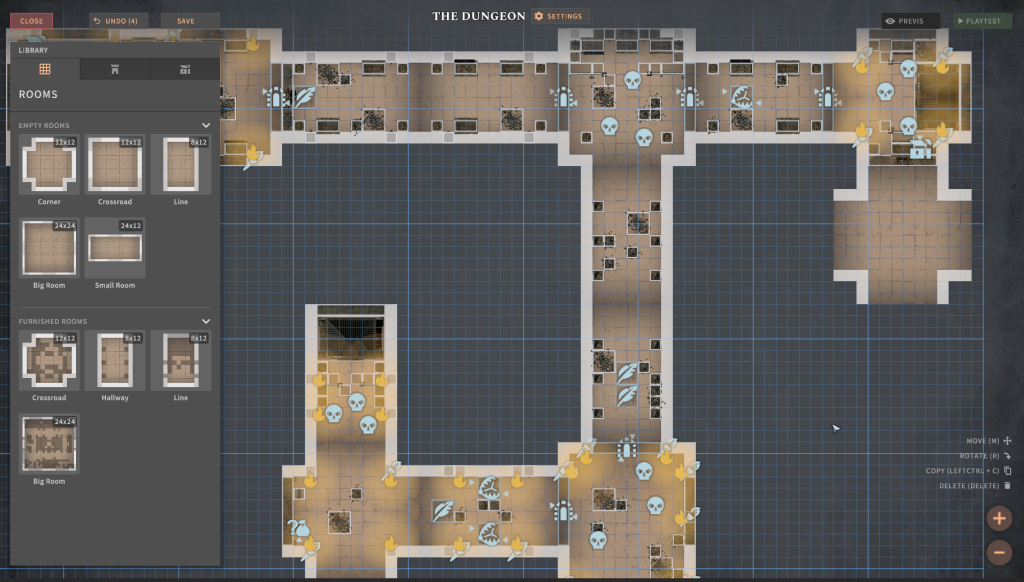 Above: Solasta: Crown of the Magister will soon get a dungeon maker.

“The entrance/ exit systems allow for any map to link to any map. You just need to put down the name of your friends map, as long as you both have files on the PC, of course,” a Tactical Adventures spokesperson said over email.

I’m looking forward to some folks making an Undermountain-style megadungeon and sharing it with the world. And if not, some friends and I will strap on our Halaster cloaks and make it happen.

Gothic’s return has a developer

Gothic is an important game when it comes to 3D action-RPGs. It built on what titles like The Elder Scrolls started, showing you could tell an interesting story and pair it a third-person presentation with real-time combat. It also showed the industry that Germany could not just make good games but also an international hit.

On Thursday, THQ Nordic announced that Alkimia Interactive is the studio working on the Gothic Remake. My first thought on this was “Who’s Alkimia?”

Turns out it’s a group from THQ Barcelona that put out the Gothic Remake demo that drummed up a positive reception in December 2019.

“As the community response to the prototype was positive, a new studio was spun up to build Gothic,” a THQ Nordic spokesperson said over email. “Had it not been positive, they would have remained a part of THQ Barcelona and worked on/supported other projects.”

The Gothic Remake will come to PC, PlayStation 5, and Xbox X/S, and it doesn’t have a release window yet.