One of my favorite pieces of video game box art is from Tales of the Unknown, Vol. 1: The Bard’s Tale, the 1985 fantasy role-playing game from Interplay. A bard strums a handheld harp, regaling a rapt gathering near a roaring hearth. It hints at a story of grand adventure, of heroes taking on an epic quest.

Turns out this image still resonates 33 years later at Interplay’s spiritual successor, InXile Entertainment. It’s the studio behind The Bard’s Tale IV: The Barrows Deep, the upcoming RPG (it releases September 18 for PC) that continues the story from the iconic trilogy of the 1980s. But this time around, InXile founder and boss Brian Fargo — also one of the key people behind the original Bard’s Tale so many years ago — had a special idea for a series he has loved for decades.

Let’s bring that bard scene to life. So he turned to one of his favorite art scenes in Southern California — the Pageant of the Masters. This is the festival in which actors re-create treasured scenes from great paintings. Fargo said this technique is known as Tableau Vivant, French for “living picture.”

“It’s been around for some time and was a source of entertainment before television, film, etc,” Fargo said. “We found some artists that were familiar with the craft.”

Fargo took inspiration from this for The Bard’s Tale. The scene with the bard regaling a rapt audience comes to live. And it’s not animation. It’s acting. InXile took actors to re-create the scene, and it appears as a loading screen in The Barrows Deep.

“Indeed it was my pet project on this. I was staring at the box in my office one day thinking about that iconic box with the bard singing away in the tavern and how I might use it in The Bard’s Tale IV,” Fargo said over email. “Being a fan of Pageant of the Masters, it hit me that we could use those same techniques to bring the painting to life and hear them recite that famous poem. It seemed the perfect opportunity to further reinforce the history of bringing a classic to a modern audience.

Fargo’s been a fan of the pageant for a long time. But this wasn’t an idea that had been hanging out in his pocket of game-development concepts.

“This was the first time I had ever considered using it and I think it’s a wonderful application of it in this case. We also took it one step further and use it as a reminder and foreshadowing technique when the player loads a game,” Fargo said. “I’ve always loved the use of foreshadowing to tease me about upcoming events in film and books, this menu was a perfect place to re-engage the player in  a new way.”

And it wasn’t something they put out in a weekend. It was a months-long project. 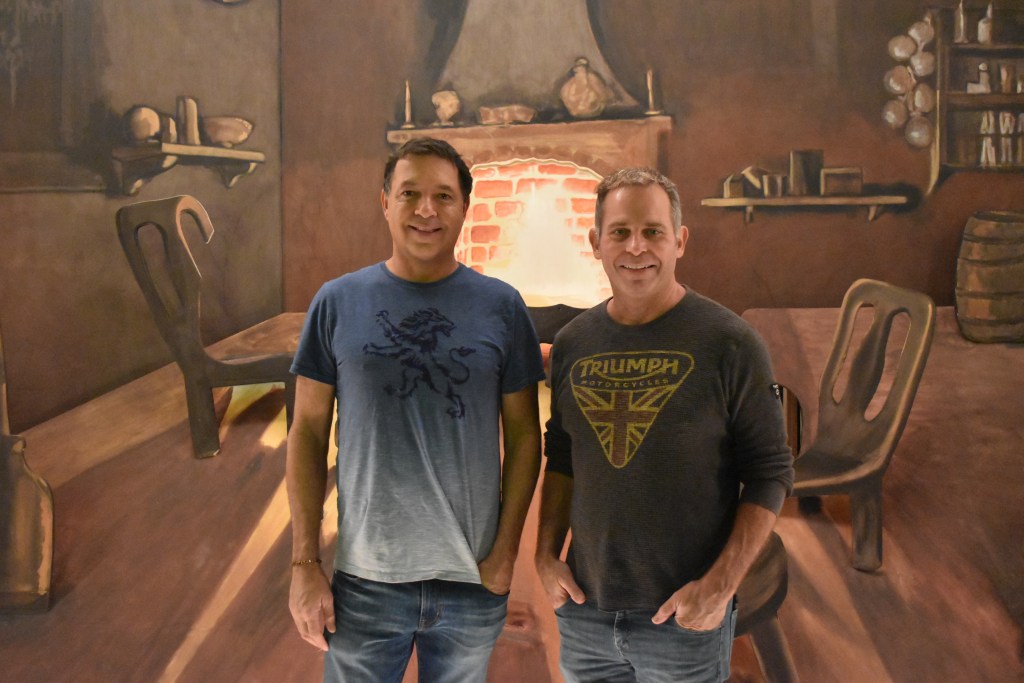 Above: Brian Fargo (left) and Michael Cranford (right) stand in the set for the bard’s recreation scene. Cranford was key to the first two Bard’s Tale games and is helping InXile with The Barrows Deep.

“We discussed how to handle the menu system sometime early last year and started to scout the talent in June,” Fargo said. “It took about three months to find the craftsman to create the effect, another three months to plan and build the sets, then we shot the sequence before Thanksgiving.”

Working in a video game was something that Tableau Vivant artist Dennis Michaels had never done before. In fact, he’d never even worked in recorded video before.

“That would be a definite no. Over the years I have created more living works of art than I can count, but this is the first ever created for a video game. In fact, it’s the first I’ve ever done that was specifically designed to be put to video. Every other one of these I’ve worked on were created to be shown to a live audience,” Michaels said.

And he was a bit nervous about the gig.

“So, there was some trepidation throughout if this would work in this format. I’ve seen a lot of video taken of living art presentations I’ve worked on, but they never were as impressive as being there. However, in the end, this project worked out beyond my expectations,” Michaels said.

Even though they were concerned, Michaels saw the appeal in the project — especially since he remembered the original Bard’s Tale box art from the 1980s.

“When they first came to me about this project, like a said earlier, I was a little concerned.  The entire concept of Tableau Vivant, which is what this type of art is called, is to make a piece of art look 2D in a 3D world. The payoff of course is when everyone starts moving and we go back to 3D. However, on this project, you won’t get the 3D payoff. Once I got past that and wrapped my head around it, it didn’t take me long to get excited about jumping on board. First of all, I remember this box cover from the ’80s. Secondly, I felt it would be a fun challenge re-creating it and bringing it to life, three dimensions or not. After all, that box cover is a piece of art, just as much as any other project I have done in the past.”

Creative director and lead designer David Rogers clued me in on this during a recent interview, noting that when they created the set, the needed to make some of the items in weird ways to complete the illusion and mimic the box art, crunching numbers to make it all fit.

“You see these weird elements. The mug is built to fit 3D, but if you look at it, it makes no sense, because it re-creates the perspective of the scene” Rogers said, noting how the stool they made to re-create the one that sits under the bard’s foot is unlike any other stool in the known universe.

So, just how does this process differ from Michaels’ previous re-creations? “As it turned out, it wasn’t much different at all,” they said.

“It was pretty much the same process. Jamming five actors in a foreground which was only 4 feet deep was a bit of a challenge, but after several fittings with the actors, I was able to work it out. Keep in mind, to make this illusion work, the foreground actor needed to be 6-foot-4 while the guy near the fireplace needed to be about 4 feet tall.”

Lighting proved to be the biggest difference.

“Usually we use very low-level lighting to assist in the illusion. Because this was being shot on video, we needed to bring those light levels up without spoiling the illusion of a 2D painting,” he said.

Music tends to accompany Tableau Vivant, but in the case of The Bard’s Tale IV, the music is part of the art. That’s another distinction that Michaels noticed.

“Of all the projects I have been involved in, most were accompanied with music. It certainly sets a mood and helps greatly with the presentation. This actually made me think of one other huge difference with the Bard’s Tale IV project. This is the first living art project I have ever worked on where the people in the painting actually acted out scenes. That is certainly a first,” he said.

It’s also among the most creative uses of full-motion video I’ve ever seen in gaming.

“It’s fun to hear that it’s appreciated, but I’ve not seen anything like this in a game before. I think all the folks that grew up playing the Bard’s Tale will get a real kick out of it,” Fargo said. 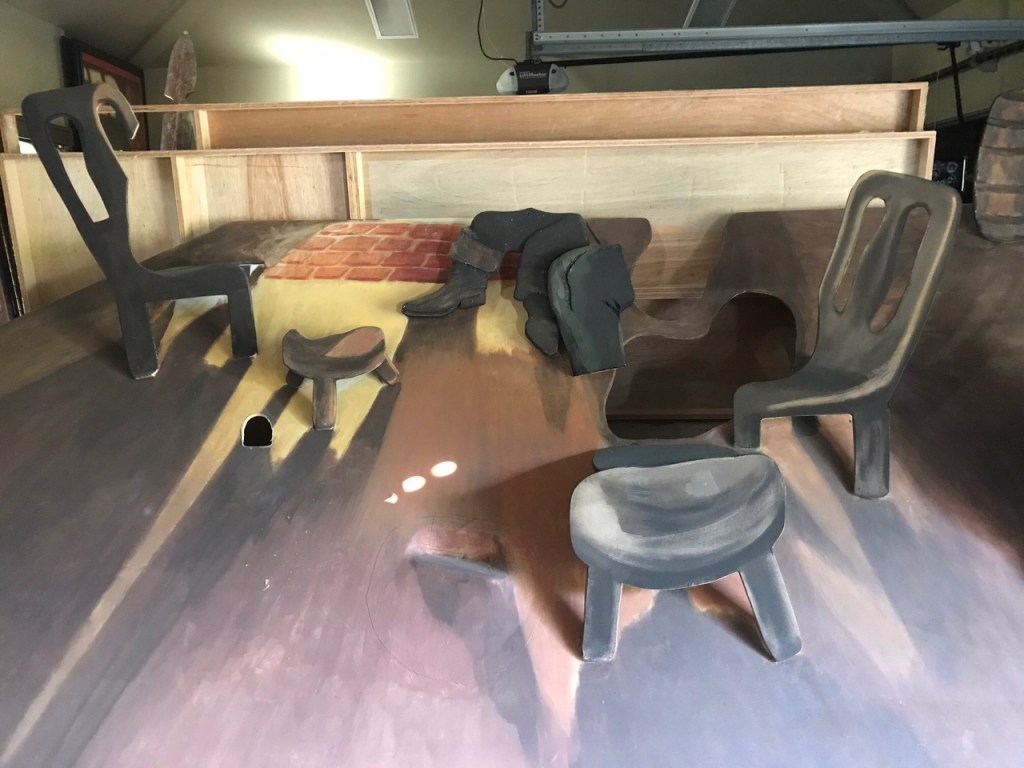 Above: Parts of the set that re-creates the iconic bard scene sits in Brian Fargo’s garage.

And parts of the set still lives in Fargo’s garage, as you can see here.

“Everyone that comes over is curious about it, as you might imagine,” Fargo said.

It sure beats the piles of toilet paper and boxes of bric-a-brac hanging out in my carhole.

The D20 Beat is GamesBeat managing editor Jason Wilson’s column on role-playing games. It’ll cover video games, the digital components of traditional tabletop RPGs, and the rise of RPG streaming. If drop me a line if you have any RPG news, insights, or memories to share … or just want to roll a digital d20 with me.