One of the first things I saw during my late February demo for Dungeons & Dragons: Dark Alliance was a verbeeg. These are a type of giant, known for their resemblances to oversized humans and being vicious marauders.

The portrayal of verbeegs in D&D has varied over the years. Like in the recent Icewind Dale: Rime of the Frostmaiden campaign or Troy Denning’s The Twilight Giants novels, they’re gangly giants, but they aren’t big fat beasts. In books such as R.A. Salvatore’s The Crystal Shard and in Dark Alliance, they are far more thicker, brutish creatures, focused on eating and plundering the smaller races.

“The verbeeg was playing a Dobro, not a banjo,” a Wizards of the Coast spokesperson said over email.

The slice I saw opened with a group of verbeeg around a cooking fire, singing and carousing and proclaiming how much they wanted to eat dwarves. Large, far, and stupid, the verbeegs reminded me of the trolls Bilbo and the dwarves find in The Hobbit. One strummed this banjo-like instrument, the Dobro, as they sang a terrible song. It was the Verbeeg Jamboree, and it was a party, alright.

For the players. As I went through the level playing Wulfgar with Tuque Games’ Jeff Hattem (guiding Catti-brie), we merrily smashed and slashed goblins, gnolls, frost trolls, and verbeegs. As we slaughtered our way through the demo in this dwarfhold (they wouldn’t tell me which one), I chatted with Hattem about the lore and this slice of Icewind Dale.

“We thought it was really cool to bring them back and reinvent them for 5th Edition,” Hattem said.

I appreciate Tuque’s attention to detail. The goblins look similar to those you see in Baldur’s Gate III from Larian Studios and the 5E books, so it shows that Wizards of the Coast is working with its partners to have a consistent look through not just the books and miniatures but video games as well.

But Tuque is also adding some of its own flavor, as we see with the verbeegs.

“What’s really cool about D&D is that it’s very open-ended. You can make it your own,” Hattem said.

One is the studio’s clever adaptation of D&D‘s short rest mechanic. You can use one to heal up, refill your potions, and lock in the loot you’ve earned … or you can skip it and press on for better loot.

Not the old Dark Alliance Above: Bruenor Battlehammer is ready to bash some brutes.

Two aspects, however, do disappoint me. Dark Alliance will not have local co-op, which seems to fly in the face of a co-op action-RPG. The most enjoyable aspect of the old Baldur’s Gate: Dark Alliance games is playing with a friend on the same console.

“We sort of got ahead of ourselves bringing all these characters and environments to life. We just kept making them look better and better, and then had to choose between keeping the fidelity of the game or reigning in the local co-op,” Hattem said.

The other is the loot. I enjoy action-RPGs in which I can decide whether or not to equip gear as soon as I pick it up. Sometimes, switching to a more powerful weapon or a set of armor with better regeneration makes the difference between death and survival. In Dark Alliance, your loot goes to your inventory, and you deal with it at the end of a mission at your base camp. Part of this is due to the “high octane action experience” Tuque is going for, Hattem said. Dealing with gear would take you out of this.

After fighting through goblins and gnolls, we finally fought of some of this repulsive giants. My main concern with Tuque’s portrayal of a verbeeg is that it doesn’t differ too much from another brutish lout, the hill giant. Both look big and fat, uncivilized, and brutish.

Tuque’s verbeeg are shorter than hill giants, and while they’re just a gluttonous as their larger cousins, they focus on showing off their kills as well. It’s not just about becoming the fattest member of the group, and thus, the most powerful.

“They have ears, all kinds of trophies on them. Skulls and bones,” Hattem said. 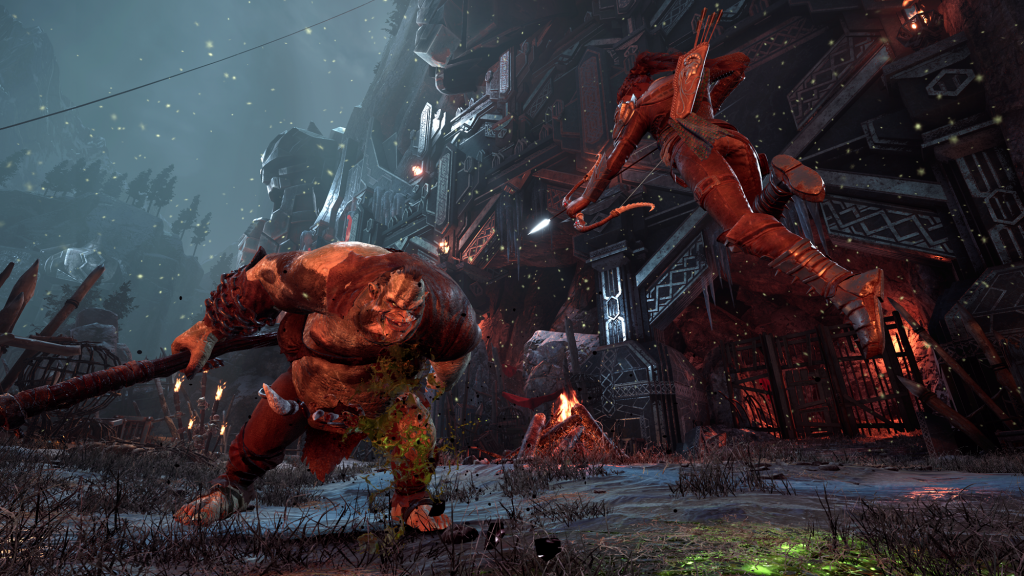 Above: This verbeeg wants to spring a trap on the agile Cattie-brie.

And unlike hill giants, verbeeg use traps. The trapper will toss out snares, and another with a spear will take advantage of it. I asked Hattem if this was something Tuque introduced to the verbeeg or something Wizards of the Coast asked for.

“It was a team effort. We worked with them, made some proposals, went back-and-forth. It was a very organic process,” he said.

And you gotta watch out for their puke. One spewed poison on us. I don’t remember reading about verbeeg doing this!

I asked about some other small details, too. Catti-brie wore a pair of googles, and I wondered if these were some special items. Turns out it’s just the sort of gear folks wear in the north to keep the glare of the sun off the snow from their eyes.

Another thing I liked was the ornamentation on a bow we found. It was a piece of common gear, the normal sort of basic stuff you’d just either sell or use for crafting components in most games. But this had a cool design on it, and Hattem said that every piece of gear has some sort of unique design. It goes into the way Wizards and Tuque are trying to create a world that feels alive, even as you slaughter hordes of baddies.

“There’s a certain level of authenticity that we want to respect with the game. I think we’ve found a happy medium of supporting players who want to progress through the game as well as being true to the IP and the characters of the world.”

Verbeegs haven’t had much representation in 5E D&D. They made their comeback in the Rime of the Frostmaiden campaign, which debuted in September. I asked if Tuque picked the verbeeg not just because of their connection to Icewind Dale and the early days of the Companions of the Hall but also because Wizards had just reintroduced the giants to D&D.

“It came more from the fact that we wanted to support where this is in the timeline. We’re about 100 years behind of the event currently in 5th Edition, so we set the game sometime after the events of The Crystal Shard book. [It] featured the verbeeg. They were a key type of monster, so we wanted to showcase them to be true to the books,” Hattem said. “And we also thought that, what was cool was they hadn’t been reimagined for 5th Edition, so we thought it’d be cool to give them our own spin on how they’re being represented.”

Just watch out for the poison puke when you and your friends smash up the Verbeeg Jamboree when Dark Alliance launches for PC and PlayStation and Xbox consoles.