Supermassive Games took the wraps off its latest horror game, The Dark Pictures Anthology: House of Ashes. This is set underneath the deserts of Iraq in 2003, just after the end of the initial hostilities of the Iraq War.

It seems more like the setting for a military combat game, but soldiers from the U.S. Army and the forces of Iraq find that they’ve got bigger problems to deal with than human enemies.

The game is the third in a series of standalone narrated horror stories from Supermassive Games and Bandai Namco dubbed The Dark Pictures Anthology. It follows 2019’s Man of Medan and 2020’s Little Hope. House of Ashes is coming out in 2021.

It’s another third-person game where you can assume control of any of five different characters in the game. The fates of the five characters you play are in your hands, said Will Doyle (game director at Supermassive Games) said in a press briefing that revealed details of the game and numerous cutscenes.

You have to make important choices to escape with your life, and often, that means being either brave or cowardly … and perhaps even sacrificing your friends. There’s a kind of “butterfly effect,” based on the chaos theory where small changes — or small decisions — can add up and cause massive changes.

“The choices that you make determine how their story branches out, and ultimately determines the endings that they will see,” Doyle said. “Everyone can live, everyone can die. With a story that never stops, the character dies, there’s no reset to go back. Each game in the anthology has multiple endings, because we know that our fans like to replay them several times to discover all of the possibilities.”

Doyle said all of the games in the series have a basis in real-world facts or legends, like the ghost ship in Man of Medan and the Salem Witch Trials in Little Hope.

“House of Ashes explores a new mystery, one that is older than anything we’ve dealt with before,” Doyle said. 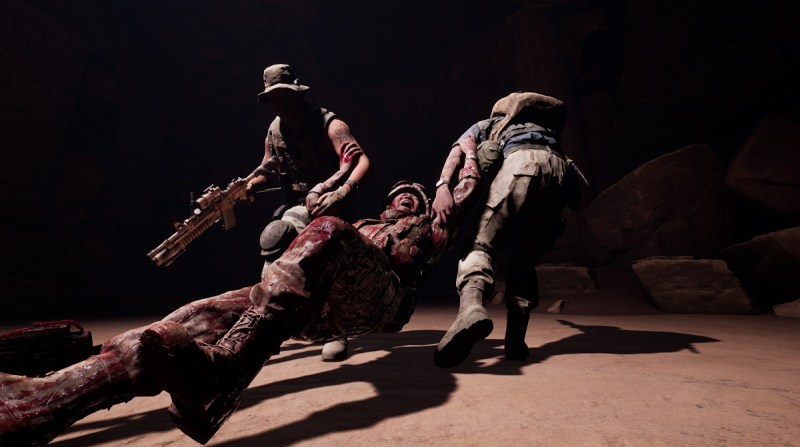 Above: Nick and Jason drag a wounded solder to safety in The Dark Pictures Anthology: House of Ashes.

The story opens in the Middle East with an army unit running into trouble. We see the star character, Ashley Tisdale (Sharpay in High School Musical), wading through a river of blood and bones, holding a human thigh bone for a torch. There are monsters in the dark.

At the close of hostilities in the Iraq War, American forces are hunting for weapons of mass destruction. The team of U.S. Special Forces, Air Force, and CIA operatives is sent on a mission to an underground chemical weapons depot.

They come under attack by holdout Iraqi forces. During the firefight, an earthquake opens up the caverns below and the soldiers fall into the underground. They discover a vast underground temple dating back to the ancient kingdom of Akkad and the reign of the God King Naram-Sin, who ruled around 2,250 BCE. He is said to have upset the gods and brought a curse on his people. He built a temple to appease them to no avail, and the gods brought war, famine, and plagues to his kingdom. The temple was buried.

And our protagonists seemed to have awakened an ancient evil. They are trapped between the enemies from above ground and those below. They have to make an alliance with their Iraqi enemies to survive.

Supermassive showed us the cinematics of the earthquake and the soldiers like CIA officer Rachel King (Tisdale) trying to find their way underground while being aware there are terrifying creatures in the dark. One of the five playable characters is Salim, an Iraqi officer who appears later in the game.

House of Ashes also takes inspiration from the H.P. Lovecraft novel At the Mountains of Madness. It’s an “exploration horror,” where a group of experts on a critical mission in a remote location, cut off from any backup, facing an inhuman enemy threat, Doyle said.

“It’s also a story about loyalty, duty and trust,” Doyle said. “Characters are always at the heart of our stories. When faced with overwhelming odds, each character in House of Ashes must decide whether to save their own hide, or set aside their personal rivalries and prejudices, and work together to survive.”

Above: Jason tells his sergeant to pull himself together in The Dark Pictures Anthology: House of Ashes.

There are some scary monsters for sure, and they’re watching you.

“The creatures in House of Ashes are some of the most complicated we’ve ever made.,” Doyle said. “Through hand animation and motion capture, we’ve created a monster that is very believable, very threatening, and very dangerous. And there’s a whole mess of them down there waiting for you.”

The exploration is more immersive because you can now navigate the environment with a 360-degree player-controlled camera, rather than fixed cameras as in past games. The studio made that change based on feedback. You can also use a flashlight to sweep the dark areas and discover new paths.

The game has QuickTime Events (QTE) which have been either liked or hated by fans in the past. You can set the speed of the timers — where you have to make a decision and press a button — so that it suits your own penchant for difficulty.

House of Ashes also has enhanced versions for next-gen consoles, with a marked improvement in overall graphical fidelity, Doyle said.

Like the previous games, there are four main modes. You can play Shared Story, which allows you to play the whole game online with a friend. You can play Movie Night, where five players in the same room can trade off as the characters change. And there are two separate single-player paths: the main theatrical cut, and the curator’s cut. The latter is available as a preorder bonus.

“On the curator’s cut, you get to experience some story from the perspective of different characters and even see scenes that you wouldn’t normally see in the theatrical time,” said Doyle.

Above: Nick and Jason in The Dark Pictures Anthology: House of Ashes.

Doyle showed off a gameplay sequence early in the game, where you see the soldiers arrive and fall into the temple caves during the earthquake. One of the playable characters is Nick, a recon Marine sent to search for weapons of mass destruction. In the curator’s cut, you can play his buddy, Jason. Nick starts navigating around the caves and sees a creature sprinting by in the dark. One of his first decisions is whether to tell his friend and superior whether he saw anything or not.

Playing as Jason, you have to decide whether to keep discipline or pay attention to what your friend is saying about creatures. While playing as Nick, you have to tend to a wounded soldier. You see Rachel get pulled away into the dark by a creature. Then you have to keep the wounded soldier quiet as the creature comes back. You can either find a way to do that or smother the soldier in order to keep the noise down. The soldiers forget about the Iraqis while they’re hiding from the creatures.

Going back to Supermassive’s Until Dawn, my favorite game of 2015, these games always put characters into impossible situations. You can play the games again and redo your big decisions.

“Keep your feet on the ground because you never know when it’s going to fall out from underneath you,” Doyle said.