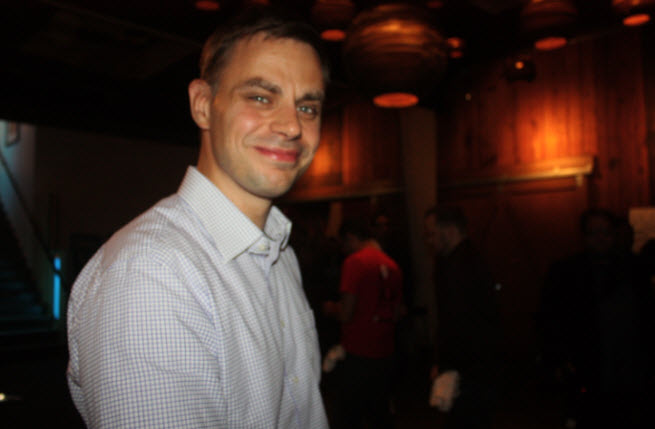 In the video game industry, the definition of a publisher has become confusing, and that’s causing a lot of angst and debate. Finding an answer to this dilemma is important because publishers usually determine who will control an enormous amount of money and content in the age of digital delivery.

That tension was clear during one moment of high drama at the Casual Connect game conference in Seattle this week. On Tuesday at the close of a polite conference panel, publishers (including Sony, a newcomer at the casual game show) described how developers should approach them in the traditional greenlighting process for the approval of new games.

The discussion enraged Finnish game industry veteran Jussi Laakkonen (pictured above), chief executive of app discovery firm Applifier. Laakkonen got up during the Q&A, grabbed a microphone, and shouted, “This is going to be a very long question, so you guys take a deep breath.” Laakkonen said that in this age of app stores and digital downloads, the days where publishers set milestone dates before releasing additional funds and strictly controlled a developer’s actions were behind them.

“All you’re describing here is how someone comes in and asks you to open your wallet,” Laakkonen said in a loud, booming voice. “That does not happen anymore. That is the reality we are all living. A game is an idea. It is data driven. It needs a partnership that goes well beyond a publication date. This panel should be telling me about the new world of publishing.”

“My question to you is: What is publishing 2.0, and how do you make it happen?” Laakkonen virtually yelled in closing. He received thunderous applause that echoed in the Triple Door concert venue. Mitch Lasky, general partner at Benchmark Capital, had raised the same question at our own GamesBeat 2012 conference. Publishing, Lasky said, is “mutating into something that we don’t quite know what it is yet.”

Publishers are facing disruption on multiple fronts (from the cloud, free-to-play business models, and downloadable web games), and their middleman role isn’t always necessary. Games have become services that never end. In Laakkonen’s new world of publishing, both developer and publisher partner up and figure a game’s audience, and then they run the analytics data and optimize the experience in order to generate the maximum amount of revenue for both companies.

Jamil Moledina, a panelist and former publishing executive at Funzio and Electronic Arts, replied, “I think that was a brilliant question. It strikes at the heart of change in our industry. How do we adapt our practices and see the world in a more expansive way?”

Traditionally,publishers have served to place developers’ games on the limited shelf space of major game retailers, making the disc, putting it in a package, distributing it, marketing and advertising it, and handling public relations. Fast forward to today, and everyone wants to take on publishing functions. Publishers were the gatekeepers, but now the big app store owners allow as many games as possible on their platforms, which makes room for these stores to develop long tails or markets for obscure content.

And with digital, different middlemen have emerged, and they all want a cut of the pie. The players include developers, publishers, platform owners, monetization firms, ad networks, analytics firms, providers of social layers, and app store operators. How, indeed, is a publisher different from a developer? What does a publisher do that is distinct from a platform owner or an app store owner? Wooga chief executive Jens Begemann told me that he is perfectly happy running his social game company as a developer and a publisher, creating games that Wooga directly releases to Facebook. No traditional publisher can do anything useful for Begemann.

Zynga has stepped up and said that it wants to publish games produced by third parties, enabling them to take advantage of its world-class servers and analytics. Activision wants to do the same thing in mobile games, teaming up with analytics firm Flurry and A/B behavioral testing firm Swrve. Japan’s Gree and DeNA-Ngmoco promise their own social mobile gaming platforms that will help users discover new games much more efficiently than others.

Michael McBride, vice president of platforms at Ngmoco, agreed that developers have to sort through a lot of noise as they do what it takes to enable a mobile or social game to take off. Even Apple, Google, Amazon, and Facebook are still redefining what they do as app store operators that are able to take on digital publishing functions.

The traditional game publishers themselves have acknowledged that change has come.

“If we look at tradition, the publishing models have changed, too,” said Adam Boyes, vice president of developer relations at Sony Computer Entertainment America. “This requires constant communication between developers and publishers. You’re absolutely right. The world is changing. If you don’t change, you’ll get left behind.”