The results of the different strategies were visible this week, when Warner Bros. announced it had hired half the team at the Avalanche Software studio — which Disney had shut down — in order to make a Disney Pixar game based on the film Cars 3.

The tale started after Disney entered the “toys to life” market, which combined physical toys with digital games, with its Infinity series. The first version of Infinity was a success, even though it was chasing the original Activision Skylanders series, which pioneered a $1 billion market starting in 2011. 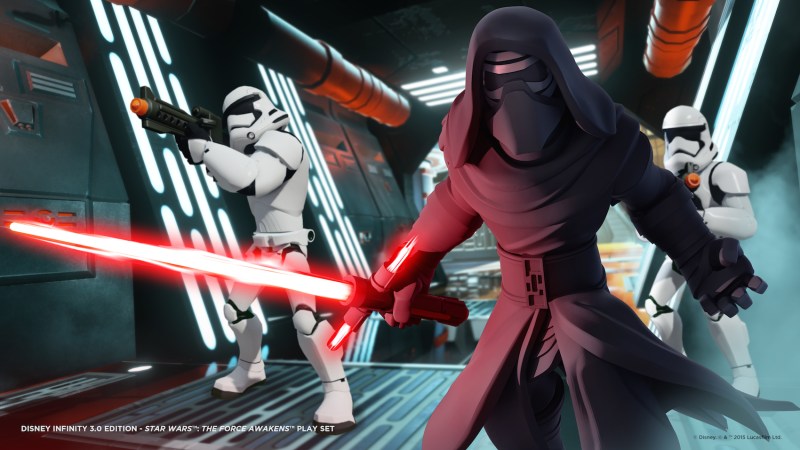 Above: Kylo Ren and the First Order stormtroopers in Disney Infinity 3.0.

Toys-to-life promised to make Disney a huge pile of money as it built out what Accenture chief technology officer Paul Daugherty called a “macrocosm,” or complete business ecosystem. Disney could sell the toys to kids in its Disney Stores. Those kids could use those toys to play the Infinity video game on their home consoles. And Disney could feed more intellectual property — Marvel, Star Wars, and Pixar — into the ecosystem to keep it all going. Only someone else with a macrocosm could compete.

Disney launched Infinity with great fanfare and a big collection of game development partners, including Avalanche Software, in 2013.

But the toys-to-life market slowed down, and it got more entrants, like Warner Bros. with its Lego Dimensions toy-game hybrid arriving in the fall of 2015. Disney launched new versions in 2014 and 2015, and Activision’s Skylanders showed up every year with a new game. Yet the market seemed over saturated.

In May 2016, Disney gave up on Infinity, showing once again that it had no patience for game businesses that didn’t show results. Not only did it give up on Infinity, it decided that it would now partner with external developers and publishers — Electronic Arts, Warner Bros., and (as of yesterday once again on Marvel) Square Enix — for console games. It also shuttered some of its mobile game efforts, and it relies on outside partners like Netmarble. Disney effectively decided that it would concentrate on making entertainment properties like films and leave games to licensing. It was a full-scale retreat.

“We were going through a bunch of decisions at Disney about what we were doing with the business long term, with the toys-to-life and games and all of that stuff,” said John Blackburn, CEO of Avalanche, in an interview with GamesBeat. “We looked for options. With Warner Bros. there was immediate interest. We started the conversations and took it through to its conclusion.” 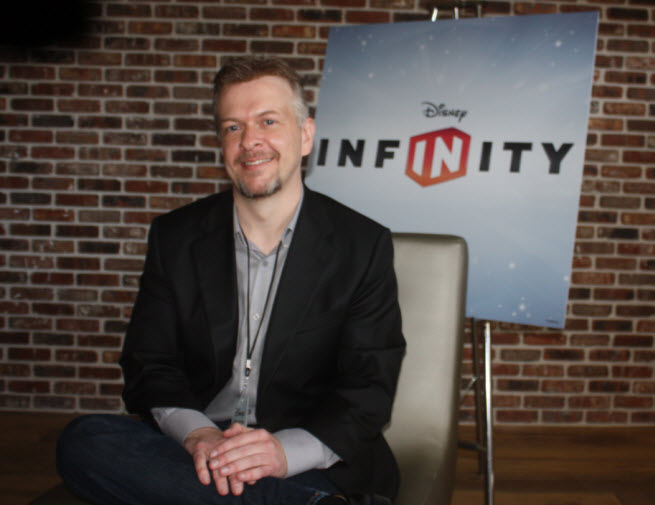 Above: John Blackburn of Avalanche Software was one of the instigators of Disney Infinity.

Within the $100 billion game market, Disney’s move was like an earthquake. Avalanche Software shut down and laid off 250 people, while Disney itself shed 50 employees. Infinity fans voiced their dismay and support. The toys-to-life survivors, Activision and Warner, and more startups entering the market, had to answer questions about why they were still in the business that Disney had abandoned.

Then we got the news last week that Warner had hired about 100 of the Avalanche people, restored the studio in Salt Lake City under the leadership of Blackburn, and had assigned them to make a licensed game based on Disney Pixar’s upcoming Cars 3 movie.

“This was a team that had worked together and wanted to stay together,” Blackburn said. “We got a sense at Warner there was a game-centric culture there. We’ve always had a connection with Warner’s NetherRealm Studios,” maker of the Mortal Kombat series. 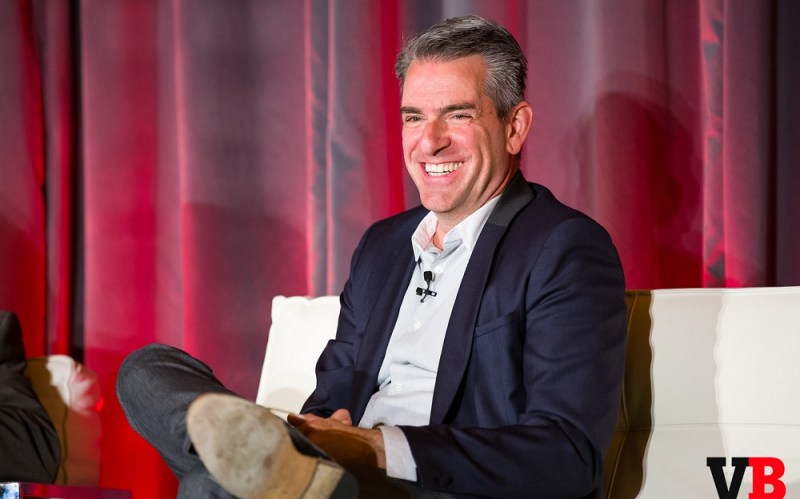 Blackburn had a good relationship with Pixar because of the prior work they had done together over many years. And Avalanche retained a core group of veterans who had been with the company for many years.

“As you know, we’ve talked many times about our philosophy of owning independent, well-run studios with great leadership teams,” said David Haddad, president of Warner Bros. Interactive Entertainment, in an interview with GamesBeat. “That was the foundation. Many of us, including myself, have known John Blackburn and the leaders of the studio for some time. When the opportunity came up to bring them into our fold and have them be our eighth content studio, part of our Warner Bros. structure, it made a lot of sense.”

The Cars 3 part threw me for a loop, but it is consistent with Disney’s new strategy, where it still believes in games but just doesn’t think that its own people should make them.

Warner, meanwhile, added an eighth studio. Warner has steadily reinvested in the strategy of making games with internal studios. That seems like a great business, but it has its challenges. Haddad acknowledged that while Warner had a huge year in 2015, it did not have many titles in 2016. That can make financial results a little lumpy.

“You know that 2016 for us was very different from 2015, with all the strength we had there,” Haddad said. “Part of what we’re trying to do is bring quality development capability in-house so we can have a more consistent slate of great titles, both in the Lego business and the core game business. Bringing Avalanche into our family of studios is part of that strategy.”

Haddad saw this as a low-risk way to add a team as well. Rather than starting a brand new studio, this was a case of reviving a studio that had already been delivering games for 20 years. 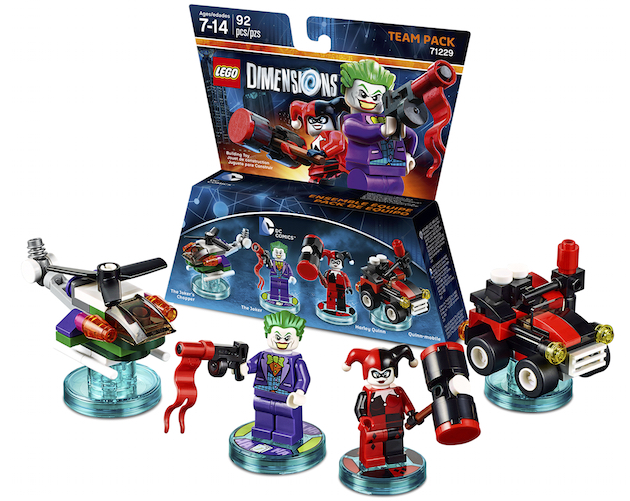 “Much of the founding leadership is still in place,” Haddad said. “They know how to work with great IP. They know how to work with great creators. For us, it’s a natural fit with the Warner Bros. studio family. This is taking a studio with 20 years of leadership and management, creating games for the market. It’s quite different from starting a new studio from scratch. It was our ability to move quickly that preserved that capability and that history. There’s nothing like teams that have shipped highly rated games before. That’s what we feel like we have here.”

Sadly, Warner couldn’t hire the whole team for what it had in mind, and some of the people had already moved on to other jobs.

As to why Warner didn’t add the team to its Lego Dimensions work, Haddad said, “We looked in their past, when they made great stand-alone games, very highly-rated games. That’s how we’re thinking about it. We’ve worked with Disney on the Lego side as an ongoing partner – Lego Marvel, Lego Star Wars – so there’s definitely a partnership in the past there.”

Beyond Cars 3, Avalanche will work on titles that it has a unique passion for. And that doesn’t include only family games, Blackburn said.

“Their recent past, because of their ownership, was focused on a particular category, but we believe there’s a lot of great game-making skills in that studio,” Haddad said.

“We are working on Cars 3 now, but that’s not the only kind of game to expect,” Blackburn said.

The tale of these two gaming giants tells you just how massive the bets by the big players are. Warner has created a development army to deliver consistent results, while Disney has been busy licensing the Kingdom to a lot of external game developers.

In this case, the two competitors found a way, through Avalanche Software, to find a partnership. And Avalanche survived.

“We took the long way around,” Blackburn said. “I am extremely grateful to Warner and Disney, especially the team at Warner, for making this happen. When the news came down from Disney, it was extremely hard. The team is grateful and happy to have this opportunity now. You realize when you have lost something, you know how special that thing you have is.”

The different strategies of Disney and Warner are sound, and they both represent big bets that gaming will keep growing.