Every summer, the video game industry hits its doldrums. And each year, I look for the game that will keep me busy. This time, it’s Batman: Arkham Knight from Rocksteady Studios and Warner Bros. Interactive Entertainment. This fourth and (allegedly) final piece in Rocksteady’s series lives up to the image of the Dark Knight as the most brutal, as well as the most flawed and most human, of superheroes.

A mature-themed game with considerable violence, Batman: Arkham Knight delivers on many fronts. It’s a vast and epic game that gives players an endless (and I do mean endless) amount of content and storytelling that immerses you in the world of Gotham City. Like the commercials say, you can really feel like you can be that Batman. The stunning thing about it is the quantity of content. It’s an open world, much like Far Cry or Watch Dogs, with an endless amount of crimes to solve in Gotham. The game was released on June 23, and I’m finally getting around to finishing the main thread. I’m glad to say that this game lives up to its hype, though it has some flaws. It does a great job of entertaining you like a blockbuster film, except it’s more like one that lasts for dozens of hours.

Let’s all say it. I am vengeance. I am the night. I am Batman.

It’s a sad affair if you are a PC gamer (this version was buggy and slow, and Warner pulled it off store shelves), but let’s not talk about that.

If you’re a console fan, Arkham Knight will keep you busy. There are a dozen different threads that you can pursue that are subchapters within the larger chaos that ensues when Scarecrow shrouds the city in a state of fear. There’s so much to do that it feels like a massively multiplayer online (MMO) game like World of Warcraft, except that it’s a single-player experience. The main story has multiple endings that aren’t really endings, but I think that longtime fans of the series and the comics will find them quite satisfying.

A story of madness 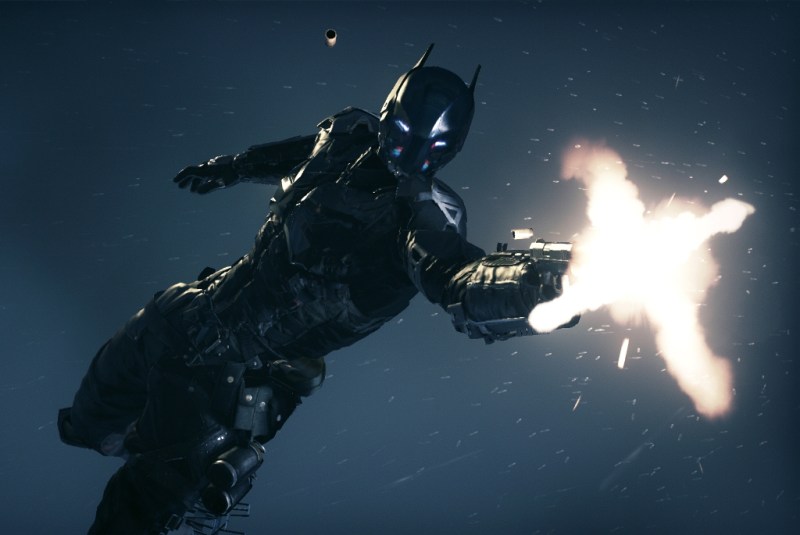 Above: The Arkham Knight is Batman’s nemesis.

Longtime series director Sefton Hill, lead designer Ian Ball, and Martin Lancaster (who worked on Crysis and Crysis 2) wrote the story. It’s set one year after the events of 2011’s Batman: Arkham City. Joker is no longer in the picture, because the Batman allowed him to die in that game. Now Batman has to confront Scarecrow, who has stepped into the vacuum and threatened to release his fear gas on all of Gotham City, causing its evacuation. Only the criminals and an army headed by the mysterious Arkham Knight remain in a plot to destroy Batman. The gloomy expectations are set at the beginning, when narrator Commissioner Gordon says he’ll tell us about the night that “The Batman died.” It promises to be a story full of anger, pain, and regret. The theme of madness runs throughout.

Because Arkham Knight starts out with this pronouncement, you spend the whole game playing with a sense of dread. Some tragedy is going to ensue that could really mean the end of the masked vigilante. This narrative and so good that I really just wanted to speed through it. As fun as some of the other side campaigns and missions appeared, I made a beeline through the campaign to finish the main campaign. And, in fact, if the game has flaws, it’s that it doesn’t make it easy to make such a beeline when you really want to get through it.

Many of Batman’s allies and enemies make an appearance. Scarecrow is actually a more compelling character than he has been in the past, thanks to voice acting from John Noble. He likes giving monologues about fear, and one of his thugs wryly remarks that he never knew fear was such a deep subject until he heard Scarecrow talk about it so much.

Robin is sidelined for an important task, but one that takes him out of the game for almost all of it, as his task is to come up with an antidote to Scarecrow’s fear toxin. We all know that this is really just an excuse to make this game all about the Dark Knight, as it should be. But Robin comes into the story in ways that surprise you, so he isn’t entirely disrespected. The wheelchair-bound Barbara Gordon, the tech-wizard Lucius Fox, the loyal butler Alfred, and Gordon play key roles in helping Batman catch the bad guys. 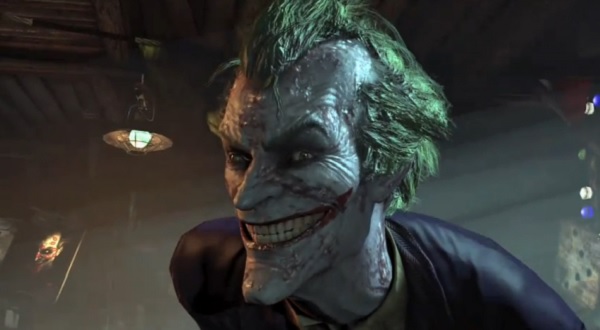 Above: Who fills the Joker’s void? The Joker, of course.

And virtually all of the bad guys make an appearance. For starters, you have to deal with Scarecrow and the Arkham Knight. Then we see appearances from The Riddler, the Penguin, Two Face, Harley Quinn, and a ton of thugs and evil drone tanks. The rogue’s gallery goes on and on. You also see Poison Ivy and Catwoman, both on Batman’s side. Crisis makes for odd bedfellows, indeed.

One of the great things about the fear toxin plot is that Batman gets a taste of it early on as he’s trying to save the city. That makes him hallucinate. This allows the game’s writers to bring back — you guessed it — the Joker, who appears to exist only in Batman’s mind. He’s Batman’s alter ego, an evil self who appears with a hilarious joke or a mean-spirited jab. Batman hallucinates so much that the Joker is something like the second main character in the game. In fact, one of the big subplots involves the Batman becoming the Joker. He makes the whole game into something like a horror show.

The only reason that players will put up with a complicated plot and a bunch of subplots that it’s fun. And thankfully, the melee core combat is exquisite. The graphics on the PlayStation 4 version are beautiful, and nothing looks fake, even the human faces. At night, the neon lights and realistic lighting and shadows are stunning.

Batman breaks bones when he fights, and his madness always drives him to the edge of murder, of being a real killer who isn’t just a servant of justice. The sound effects are thunderous when Batman takes out a dozen thugs in a melee. There’s plenty of slow motion for you to appreciate the best takedowns, and Batman’s cape is always flowing realistically. In fact, there is nothing so wondrous as flying through the darkened city with your cape rippling in the wind. I just loved jumping off buildings in this game.

The Batmobile takes a bow 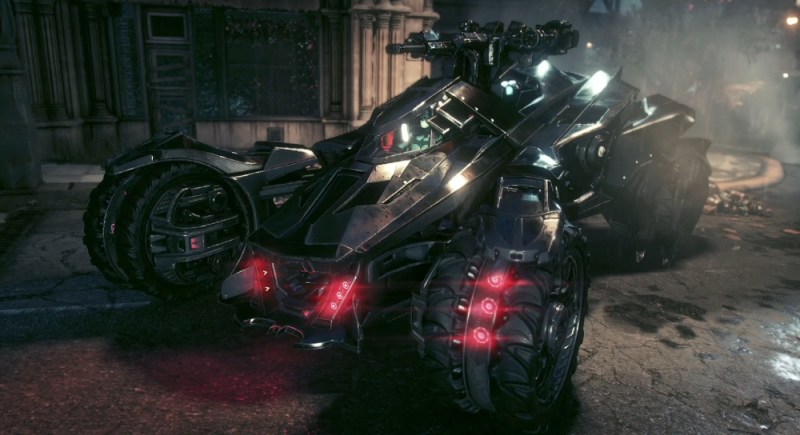 Above: Batmobile, in battle tank mode

The other main character here is a vehicle. Half the fun is that you get to drive the Batmobile like a bat out of hell. Sometimes you drive it too much and you wind up driving across what would be more like the entire country, just to get away from the bad guys. The Batmobile can transform itself into a tank-like battle mode, where it scoots from side-to-side and moves slowly, to its sleek racing mode where nothing can catch it. It has tons of missions, like the Ace Chemical factory attack, where you have to take out dozens of enemies in tank mode and jump over bridges in fast mode.

Some of the missions, like Riddler’s race track in the sewers, are designed simply to show off the Batmobile. You can summon the car via remote control and hop in with style, your cape flowing as you land in the seat. You can drive through the huge city of Gotham to various missions, which you can execute in any order. Batman can operate the Batmobile remotely, and that allows Batman to solve some brilliant brain-teasing puzzles. 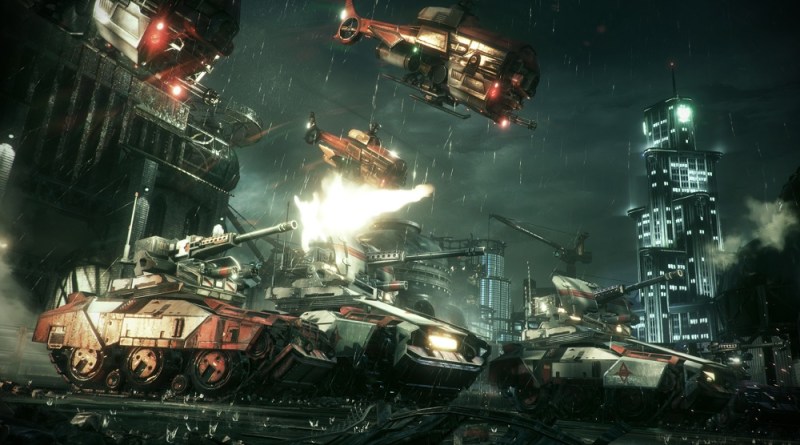 Batman’s gadgets, beyond the Batmobile, are also quite fascinating. He gets around, Spider-man style, by firing his grappling line and pulling himself along, sort of like a reverse zip line. I’m not sure about the physics of that, but it’s great fun bounding to the top of a big building with the grapple. Those gadgets give you a lot of choices. You can hack devices, stun your enemies with an electric charge, or whack someone from afar with a Batarang. You can take bad guys down anyway you please.

I found that leveling up your character and the Batmobile really matters. There are some missions that you shouldn’t try unless you’re really capable. Oh, lord, I had to play some of the missions over and over again, like the final tank battle between the Batmobile and the Arkham Knight’s giant tank.

This game does have some ridiculous moments. Batman takes down thugs in a most brutal way and, at least when I’m controlling him, he runs over a lot of people in the street. But the Batman sticks to his ethos of never killing. He has no problem sending someone to the hospital with 99 broken bones, but at least they don’t die. One of the more interesting plots is of course Scarecrow’s threat to spray poison gas across the whole city, driving everyone mad with fear. Poison Ivy has a counter to this in the form of giant plants. While it makes sense that nature can counteract chemicals, this part of the plot is goofy. Batman is also ridiculously formal with Barbara Gordon, calling her Oracle all of the time.

I also think that the writers themselves had a little too much fear toxin. There are times when there’s so much crazy stuff happening that I didn’t know what was real and what wasn’t. Some of the missions were ridiculously difficult. But I think the game designers would consider that an accomplishment, as their main object in life is to torture us poor gamers. 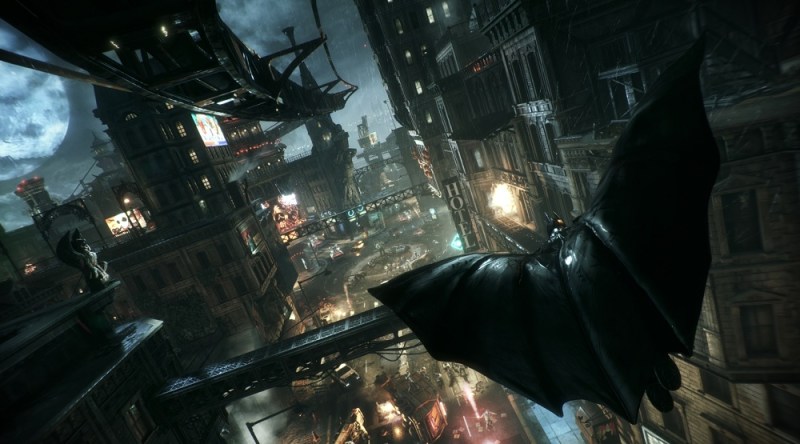 This game has so much to do, on foot or in the Batmobile, fighting with your fists or being stealthy with gadgets, that I don’t know what my favorite part is. And clearly, that’s a sign of an outstanding game. If you haven’t picked it up and haven’t found that big game of the summer yet, you should get around to playing Batman: Arkham Knight. The brutal superhero genre lives on. And this game is one of the year’s best. I’m just writing my impressions here. But if I had to give this game a score, I’d put it at 90 out of 100. And now there are all those other games I need to catch up on.