The 4,000 or so investors and VIPs who attended the Milken Global Conference this week heard sessions about luxury brands, avoiding war in North Korea, investing in China, cryptocurrency and blockchain, tax cuts, cannabis, and the global entertainment business opportunities. But the super-rich also listened to sessions that I moderated on esports and gaming breaking into mainstream culture, as well as another session on how to be an esports team owner.

Michael Milken, the creator of the conference and financier, is an investor along with his son Gregory in the esports team Immortals. Film studio Lionsgate, which made The Hunger Games, held a reception on the roof of a swanky hotel in Beverly Hills ahead of the Milken event, and it highlighted for me how Los Angeles has become the epicenter for the esports … uh, call it what you want. The phenomenon. The explosion. The overhype. The gold rush. The bubble.

Global esports revenues will grow 38 percent to $906 million in 2018 and further grow to $1.65 billion by 2021, according to a new annual report on esports by market researcher Newzoo. Esports is less than 1 percent of the revenue of the $137.9 billion global games business. But it is the shiny new thing. I’m writing stories every week about esports, much like a year or two ago I was writing every week about virtual reality investments and startups. Gaming and esports has its own specialist investors, like Gregory Milken, managing director at March Capital Partners. 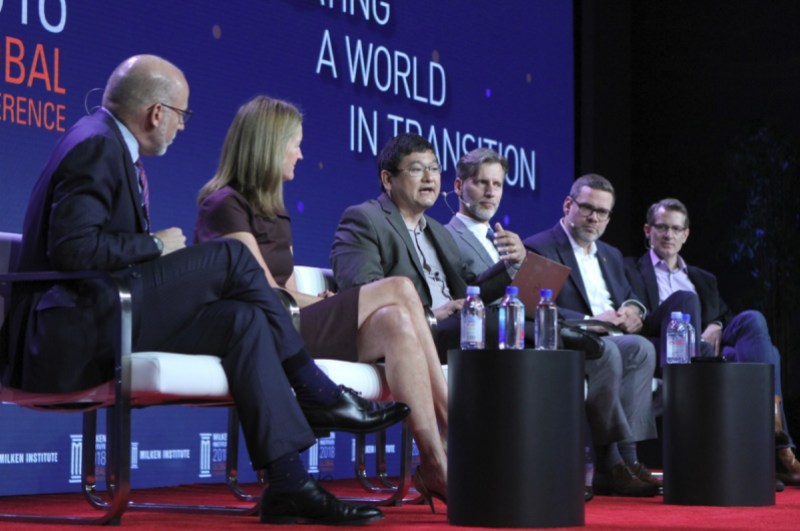 Steve Ballmer, the former CEO of Microsoft, appeared at the event and talked about his $2 billion purchase of the LA Clippers NBA basketball team in 2014. But was Ballmer too late to the NBA party, and did he choose the wrong sport? About the same time that Ballmer was getting up to speed on the Clippers, Noah Whinston, a young man still in his early 20s, was dropping out of college and getting billionaires like the Milkens and AEG CEO Phil Anschutz to back Immortals and its new Overwatch League team, Los Angeles Valiant.

Fast-forward just a couple of years, and Whinston is an old-timer. And moguls were present at Lionsgate’s event, which featured Overwatch cosplayers, actresses like Alison Haislip, and L.A. Valiant player Scott “Custa” Kennedy.

Launched in January, Blizzard’s Overwatch League has been drawing growing viewership in the millions of spectators per week, and the league is now in negotiations to add expansion teams for later this year.

Among those who have invested in esports via the Overwatch League are Jeff Wilpon, cofounder of Sterling VC and chief operating officer of the New York Mets; Robert Kraft, chairman of the Kraft Group and owner of the New England Patriots; Lionsgate CEO Jon Feltheimer and Lionsgate executive Peter Levin; Andy Miller, chairman of NRG Esports and co-owner of the Sacramento Kings NBA team; and Kevin Chou, former CEO of mobile game company Kabam.

Not only is the money going into teams. It’s going into venues, ranging from 400 seats to 18,000 seats, said Steve Cohen, executive vice president at Anschutz Corp. and chief strategy officer at AEG, which owns Staples Center among many other entertainment venues. There are multiple layers of investments happening to enable the whole esports ecosystem to mirror traditional sports infrastructure, said Kent Wakeford, cofounder of Gen.G (formerly KSV Esports). 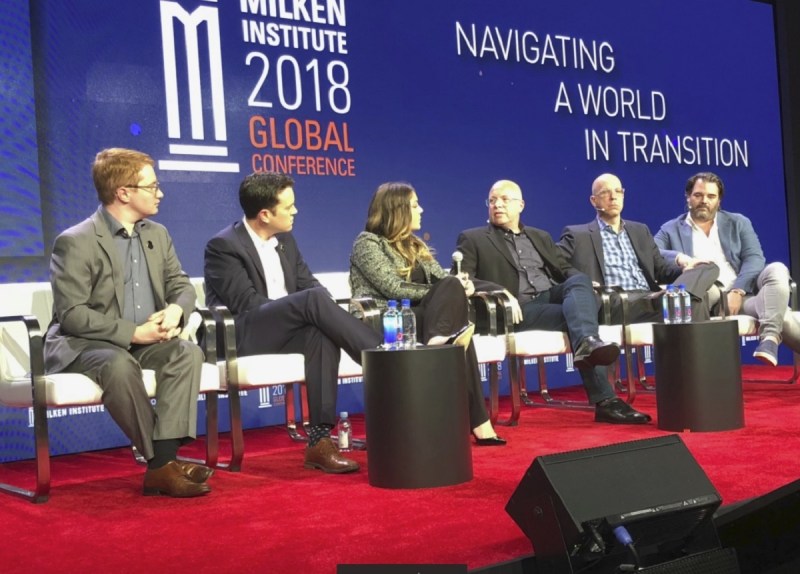 These people were mingling among the investors attending the event at the Beverly Hilton hotel, where the Golden Globe awards are held each year. The hotel was on lockdown, with tight security. Bigwigs were moving through the halls, including Shark Tank’s Kevin O’Leary, cofounder of SoftKey and O’Leary Funds; Tony Blair, former British Prime Minister; House speaker Paul Ryan; former U.S. Vice President Al Gore; and U.S. Treasury Secretary Steve Mnuchin. I was the imposter among them, as my ticket was my knowledge about video games and esports.

Just yesterday, the New York Times ran a long article on how players spent more than 128 million hours on Twitch watching people play Fortnite. It noted how we are seeing a shift in demographics, where traditional media is failing to reach millennials, who are spending their time engaging with games and watching those who are skilled at playing them.

All of this must mean, for the skeptics among us, that esports has jumped the shark. And maybe it’s time to throw a bunch of money back into virtual reality, which used to be the shiny new thing. Milken’s involvement is not necessarily a kind of Midas touch. There are those who remember that he had some history before doing such grand events. Milken was indicted for racketeering and securities fraud in 1989 in an insider trading investigation, and he pleaded guilty to securities and reporting violations. He was was sentenced to ten years in prison, fined $600 million, and permanently barred from the securities industry by the Securities and Exchange Commission. His sentence was later reduced to two years. Since that time, he survived prostate cancer and became a medical philanthropist. He has been running the Milken Institute think tank since 1991.

At my own panel, I pointed out that there aren’t a lot of people making money in esports yet, as Dennis “Thresh” Fong, the first competitive gamer, noted at our GamesBeat Summit conference in early April. While the numbers of esports spectators is impressive, they’re not spending like traditional sports fans yet. In 2017 the average esports fan spent $4.58, while NBA basketball fans spend, on average, $15 each. And Newzoo said the global average annual revenue per esports enthusiast will be $5.49 in 2018.

Cohen said it’s early, as this decades-old industry of esports is still in its infancy. And that’s true. The ecosystem for providing sustainable leagues is only falling into place, said Ann Hand, the CEO of Super League Gaming, which provides a path to pros for amateur players. Ramon Hermann of Tencent noted that Riot Games has been seeding the universities with millions of dollars in scholarship money to get the equivalent of NCAA basketball going at colleges with its League of Legends games. 500 students are going to college now on League of Legends scholarships. 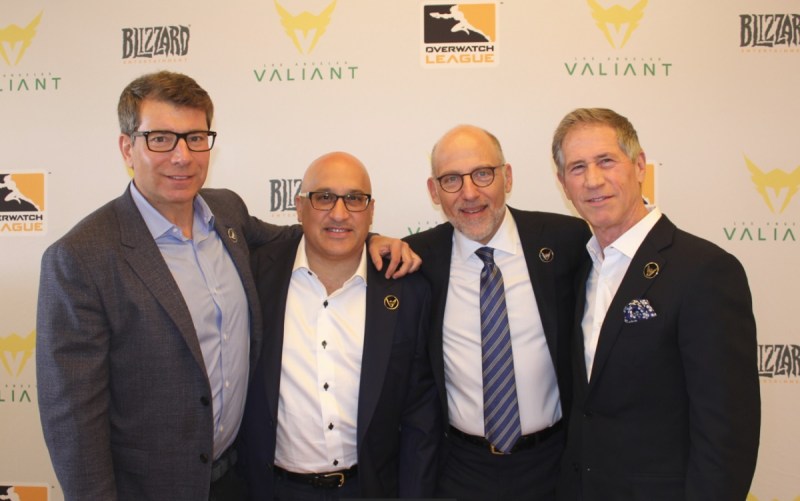 Above: Left to right: Peter Levin of Lionsgate, Aryeh Bourkoff of LionTree, Steve Cohen of AEG, and Jon Feltheimer of Lionsgate.

Give it time, and esports will start monetizing its hundred of millions of players and spectators in the same way the NBA does. One of the ways that will happen: Immortals has teamed up with sneaker designer K-Swiss to make an esports shoe for enthusiasts. Once the momentum starts going on video views, broadcast rights, merchandise sales, ticket sales, sponsorships, and advertising, the money should start rolling in.

It does feel like we’re witnessing the birth of a new sport. I’m starting to cover esports on a more regular basis, like a business page reporter at a daily newspaper, and I haven’t moved into covering it like a sports page reporter. On the sports page, you would read about your favorite stars, like Stephen Curry of the Warriors, and the equivalent celebrities in esports. We aren’t yet at the day where you can recognize an Overwatch star walking down the street, said Stephanie Snowden director of video strategy at The Ringer, a traditional sports publication.

But that day may be coming where the esports celebrities are going to become household names among consumers. I’d like to get a bird’s-eye view of what is happening, rather than focus on the small stuff. To paraphrase my old newspaper editor, I don’t want to write about sales of new cans of paint while the Italian Renaissance is happening. The esports renaissance is having its moment now, and I’d like to go back to the Milken event in a year to see where the super rich have placed their bets in this fledgling industry.

Disclosure: The Milken Institute paid for my accommodations at the event. Our coverage remains objective.